An interview with indie game maker Steph Thirion, to celebrate the release of Eliss Infinity 1.1 on iOS and Android.
Adam Saltsman
Blogger
June 27, 2014

Steph Thirion, aka Little Eyes, aka Futumani, is an independent game maker and the creator of the classic touchscreen game Eliss. Steph grew up in Cameroon, France, Portugal and Spain, and currently resides in San Francisco, CA, where he built Eliss Infinity and is working on one-button constellation-er Faraway.

Full disclosure: I interviewed Steph last week in part to help show why I'm such a big fan of his, but also to show why Finji took on Eliss Infinity for Android as our most recent partner project. Steph is a remarkable creator and we are honored to be collaborating with him!

Finally, as you might imagine when you build every part of your games from scratch by yourself (more on that in a minute) you stay pretty busy. So I want to thank Steph for taking the time to answer my questions! Thanks, Steph :)

AS: Ok, let's do this! Can you start by talking a bit about your background, what you did before games, and what games you've worked on?

I studied graphic design. My first job was at a gigantic multinational ad agency, as an art director for print media. I went back to school to study interactive media and my second job was at a gigantic multinational ad agency, but this time as a programmer, building online interactive experiences. After that I transitioned to doing freelance work, also online interactive stuff. I also did some interactive art projects and deepened my programming knowledge on the side. I've also made music as a hobby most of my life. Eliss was my first game, and also my way out of advertising and into realizing my ideas for a living. I've also been working on Faraway which is yet to be released. AS: I think without the ad industry I would not have survived as an indie... Ad agencies can be great clients for freelance game designers. I felt like it was enormously stressful work though... Tight deadlines, lots of pressure. Was there some main driving force that got you out of the industry? Creative freedom? Quality of life?

Yeah it's pretty intense. My second gig as a programmer was insane. It felt like time was compressed into a quarter of its size, we did so much work in so little time, after 6 months I felt I had earned the experience of 2 years. It was intense but also a lot of fun to interact with that team, I miss hanging out with some of them. But I couldn't go back to advertising. Moral values in that industry are pretty low. It's all about selling a product, no matter the moral cost. And since the deadlines are so tight, there's no time for inventing good ideas, and so many times the solution is cloning lesser known artists' works. All these talented people wasting their gift into that industry, it's sad. There are exceptions but in general it's pretty grim. But ultimately I left the industry because it was just a stop gap, I wanted to work on my own ideas. I couldn't go back.

AS: So maybe not everybody knows this but you do everything on your games. Like, everything: the design, the programming, the graphics, the sound, the website, the trailer, like... literally everything is sort of hand-crafted by you. This isn't super common in the commercial indie space right now. I imagine it's a kind of heady mix of pressure and freedom? What's amazing about it? What are the hard parts?

One good part is to be able to work on all the different things that make up a videogame. Making music, thinking about interaction, designing and animating things with code, all this stuff I'm passionate about, so it's really fun to get to touch all that. Another good thing is this direct lane between vision and execution. I love being able to have a feeling in my head of what this thing will be and have every component - colors, animations, music, sounds - stay as close as possible to that feeling. When collaborating with people that can get a bit more complicated, some of that inner personal vision can easily get lost in the process.

And in the end you get this videogame completely built by one person. Every component of the game shares the same DNA, the same origin, the same blood and sweat. It's an interactive audio visual window into a person. I think that's beautiful.

But it's hard because the moment you try to reach a higher level of quality you can feel all the extra weight on your shoulders, and everything moves very slowly because you're working in serial instead of in parallel, and since you're not an expert at one thing but many and you're working with software that doesn't always behave as expected things keep going wrong and delay everything, and then your project is late and more pressure builds up, and if you push yourself too hard all that work and pressure ends up affecting your life and your health. I've been walking on this tight rope these last few years and I fell into the abyss a few times. I wouldn't recommend this approach, it's risky. I want to end this phase the way I started it with the release of Faraway, and after that I need to rethink how I work. Either scale back and build simpler things, or collaborate. After 5 years working alone, that sounds fun.

AS: When I first went "indie" or whatever I was really committed to collaboration and being part of a team, but I got really burned by some ... unsatisfactory collaborations. For a few years the only person I collaborated with was Danny Baranowsky, and ONLY for music. I was doing all the art, programming, sound effects, game design, etc. It's taken me a long time to figure out what I want from a collaboration. That's not even a question, really, apologies!

That's interesting. Would love to hear more about that when we get the chance. Like you I think part of the reason why I went alone was feeling a bit traumatised with past collaborations. For example compromising what feels like the right idea because the other party doesn't get it or doesn't agree with it. Also I got burned out multiple times by collaborators taking credit for things they didn't do. Finding the right people to collaborate with is really hard, the most talented people are the busiest. But I think it's also about learning to communicate with others, which I need to get better at and am not getting any practice.

AS: Mmmmm I think I will save my bad collaborations for another time... So! Eliss came out in March 2009, which was like ~6 months after the first iOS game I worked on, and about 6 months before Canabalt. This is... haha, this sounds insane to say but the classic version of Eliss is over five years old. Do you have any thoughts about iOS games and mobile games in general, and how this space has evolved? (God that sounds marketing-y, I don't even)

I find it hard to stay on top of all iOS things while at the same time making videogames, I can only do one insane thing at once, so I'm not completely aware of all that's going on. But yeah a lot feels different, for one thing it's become enormous. Games-wise but also purchases-wise since games are so cheap. Any big hit on the App Store can quickly become this crazy cultural phenomenon, which is interesting to see happening with videogames. Other than that some companies are now making enormous amounts of money by analyzing the player's behaviors and exploiting them, so that makes struggling to pay the rent every month while trying to delight users with good honest games a bit ironic. But so far that hasn't yet completely stopped how every now and then a beautiful and surprising game - often by someone unknown - pops out of seemingly nowhere. That seems like a very App Store-y thing. I hope Apple figures out how to improve curation before the darkness takes over and scares all potential developers of beautiful and surprising games. 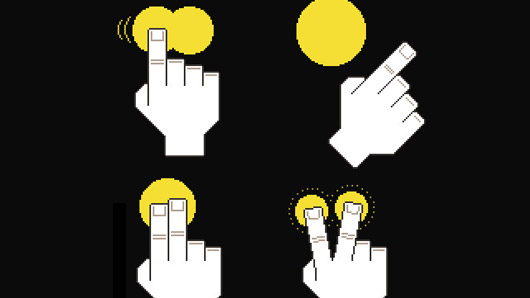 AS: Yea I feel like this is something that comes up with indies, especially indies with mobile experience. And I agree, it does seem like getting noticed is harder, and yet honest little gems to pop up from time to time still. I was going to ask "what would you like to see changed on the App Store" but I think I would rather ask a different question... Eliss is one of the all-time great touchscreen designs. It was a huge inspiration for how Greg & I approached the design on Hundreds. Do you have any thoughts on designing for specific hardware, like a touchscreen? What other weird hardware is out there that has been giving you cool ideas?

Hmmmm.. There's a lot out there that's exciting. I still think there's some interesting stuff that has yet to be done with the usual phone suspects - multitouch and accelerometers. I still have an accelerometer game idea I'd like to make. Virtual reality seems really exciting to me, The way it makes you believe you're another body in another place, it's pretty amazing. I've seen a friend do really mind blowing VR stuff by combining different dated technologies, but that's a secret. I'd love to work on VR eventually. And I love the idea of location based videogames, the way you're playing a virtual game while interacting inside a physical space, it's a really good feeling. I played Can You See Me Now? by Blast Theory almost ten years ago and that memory still inspires me. But GPS is very limiting, I'm looking forward to a more precise and less flimsy positioning tech than GPS, for more precise positioning interactions.