Every year, Tokyo Game Show runs its Sense of Wonder Night event. The showcase gets dozens of applications from developers all over the world and its organizers select ten finalists to present their games on the second business day of Tokyo Game Show.

Everyone in the audience is given a squeaky hammer with which to express admiration for the works being presented as an alternative to clapping and at the end, a handful of awards are given out. You can watch archived footage of the whole event above, but here are the highlights.

This game was inspired by anamorphosis, a kind of engineered optical illusion. Think artworks that only look right if viewed from the correct angle.

The game is a mechanically simple (from the player's viewpoint) first-person puzzle game, much like Portal. If the player finds the right angle to make a 2D picture look 3D, they can realize it as a 3D object. 3D objects can also be flattened to get them out of the way. You can download the prototype at their web site. 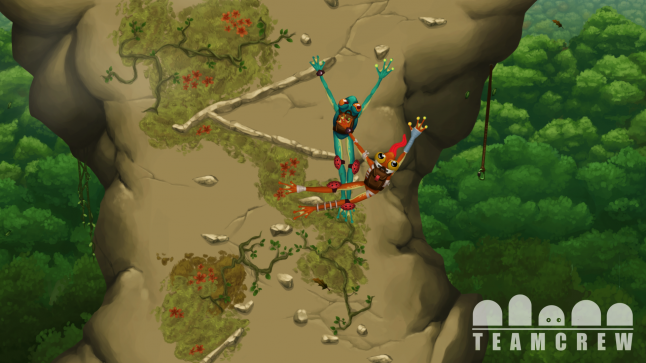 Frog Climbers is the kind of two-player game with the potential to end friendships.

Each player controls a frog trying to reach the top of a procedurally generated climbing course first. It's designed for use with a controller, with joysticks controlling arm direction and top buttons used for gripping handholds. (The other frog counts as a handhold, though, and twice during the presentation, one of the developers threw the other off the mountain.)

There are systems in place designed to keep the losing player close to the winning player so that it feels like a constant neck-and-neck race that anyone of any skill level can enjoy.

The concept behind the game is generative art being created in real time with the player as an organic element in the design, so that no two pieces of art come out exactly the same.

Enemies come on screen in time to the music. The player taps and holds to shrink them until they disappear, at which time a point is created on the background. As more points are created, lines appear between them, and when the game ends the player is left with an artistic record of how they played. The sound effects are dynamic, and blend well with the music.

The developers are a group of college students and recent graduates, and they hope to have a commercial version on the App Store early next year.

This game is designed "for couples fooling around."

It was designed to facilitate face-to-face communication in an era where most people communicate via electronics and many people are uncomfortable communicating face to face. The designer's thinking is that since two people using one controller involves scrunching together, the players naturally feel the warmth and body rhythms of the other player. The game itself is an absurd and sexually suggestive game based on traditional Japanese mochi pounding (one player is the mallet and the other the bucket of mochi), the physics engine of which lends itself to some pretty comical set ups.

This is probably the best of all the games I tried at Tokyo Game Show. The player is given a blob which only moves when the player destroys part of it. It grows back its mass on the other side. It's a very simple concept which proves more tricky to control than you'd expect, making it not only innovative but challenging. The game's physics are actually quite involved, allowing for challenges involving weight and balance in addition to basic traversal challenges like hooking into a niche and growing the blob across the ceiling. I'm really looking forward to this one, which is due out on Windows, Mac, and Linux later this fall. You can pre-order it at its web site.

Our sister site IndieGames.com covered this stealth murder game a bit in the past. It's about a guy who can't sleep because of his neighbor's noisy party. He decides to kill everyone at the party, and then go on a rampage at other parties as well. The player can stab people directly or use the environment to set up traps, then get away from the corpse as fast as possible so that they don't get caught when the police come. 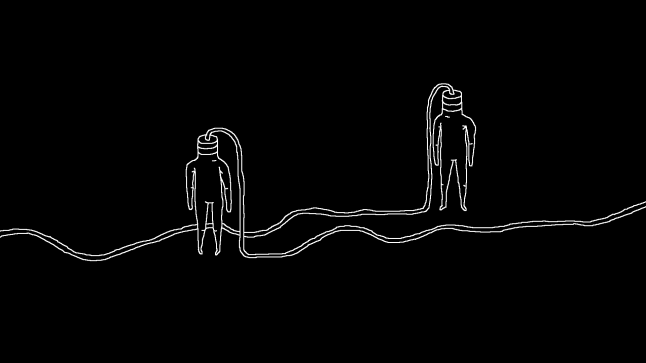 If games can be art, then Plug & Play certainly qualifies. It's about 15 minutes long and is an adaptation of a surrealist short film to the video game medium. The devs showed some footage of how the game objects were constructed in Unity to give it the feel of hand-drawn animation, and although they didn't explain in great detail, it was pretty impressive.

ReelBlade: Battle of the High Seas

This game was designed specifically for a new and interesting controller. The controller has a handle with a switch on it. In one switch position, the controller looks like a sword, but if you flip it the other direction, the "blade" on the controller flattens out and becomes floppy.

In ReelBlade, you use it in floppy mode like a fishing rod to pull an octopus boss out of the sea. You then fight it, switching back and forth between controller modes depending on the circumstances, alternately defending and attacking.

The controller is really well made and felt good to use. The developers are hoping to get the controller into physical arcades, which are still big in Japan. I asked about touchscreen devices and although the developer said that would be easy enough to pull off, since the game was made in Unity, that isn't their focus. 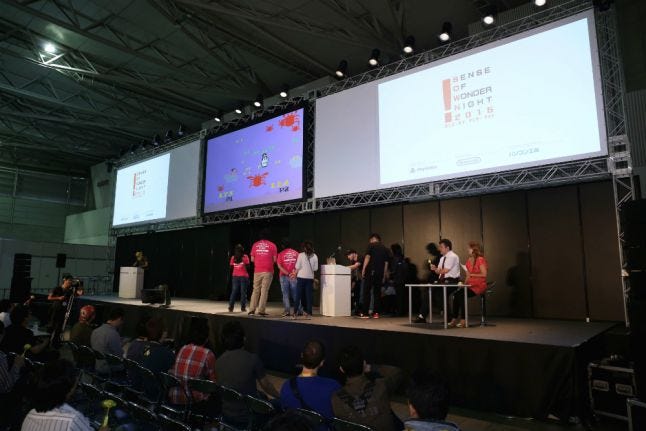 The developer of Tough Coded: Live didn't speak during his presentation at all.

He had on a robot mask with blinking lights and typed anything he might otherwise have said into his computer so it would be projected on the screen. The bulk of the presentation was a demonstration of the game itself.

Two volunteer staff played a shooting game in which the developer served as a GM or "game master" along the lines of what any tabletop RPG players are accustomed to. He decided what enemies the players would face in real time. He even had some dirty tricks up his sleeve, such as manifesting a hand cursor that could be used to drag players directly into monsters and projectiles. The final boss was a pixellated George Clooney face that turned out to be a robot with lots of lasers. It was never demoed at the rest of the show. 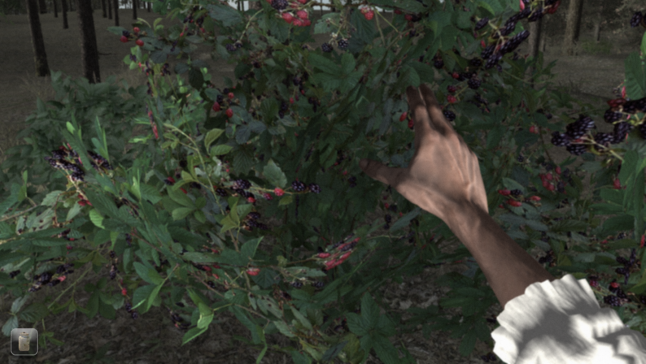 Walden, A Game is an attempt by the Game Innovation Lab at USC to simulate Henry David Thoreau's survival experiment. It is a survival game, but not in the usual vein. The player has only so much energy per day to use to keep themselves alive, but they also have to take time to look for creative inspiration. The only way to win the game is to balance the two.