Taking a breather from all of the manic-shooting curtain-fire mayhem to which we so commonly subject our mortal bodies, immersing ourselves instead in the serenity and beauty of "dot eating."
Michael Molinari
Blogger
March 16, 2009 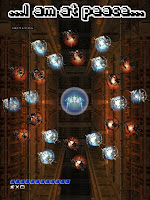 For a game like Ikaruga, the concepts of meticulous memorization of movements, skillful execution of polarity-switching, and perfected timing are but a few of the many necessary ingredients for a successful playthrough.

I don't know about you, but doing all of this is as stressful to my body as it is thrilling to succeed in (I can't be the only one with shaky wrists and a few beads of sweat on my brow after completing Chapter 4 on one credit). It then comes as a sort of shock to find that there's a hidden method of implicit play that comes from not firing a single bullet.

For those familiar (I can sense a few heads nodding with a grin), feel free to relive your experiences in this post; for those new to the idea, I invite you to learn about one of the most calming and soothing times you'll ever have in a shmup. This is all about becoming a Dot Eater.

In similar fashion to collecting dogs in Radiant Silvergun, there's a secret ranking that is achieved upon fulfilling the requirements of never firing, but rather absorbing enemy bullets of your current polarity, appropriately named Dot Eater!.

Because your score would be so pitiful compared to your score if you had gone for max chains, it's nice that the Dot Eater! ranking takes the place of the standard grading system (of C through the makes-you-look-good S++).

The way in which one plays as a dot eater is entirely up to that person. You could try and collect as many dots as possible, or see how seldom you need to move in order to survive. The first (of multiple) times my jaw dropped into self-discovered realization was in finding that the entire intro to Chapter 1 can be played without moving, or even changing polarity for that matter.

The true beauty of enemy patterns and bullet fire comes out in full choreography, blossoming across the screen and exiting with as much grace as your involuntary arcs and passive dodges throughout each wave. Boss battles must be played out for the entire time limit, allowing you to appreciate the balance and harmony of bullet patterns (minding the oscillating swiftness of the bosses as they dance above you).

Though you're still required to pay attention and act accordingly when needed, the fact that you only have to press one button to play greatly simplifies each chapter, effectively allowing your brain's extra processing power to see what you've actually been dodging all these years. 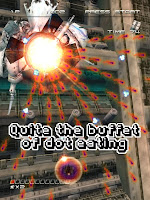 I've even noticed that my breathing patterns are rhythmically tied to the ballet of maneuvers, a detail only apparent during the scoring screen following each chapter.

The constant portrayal of the yin and yang throughout the game (can't forget that sweet tattoo on Buppousou's main body) shows its true form when everything from the game is kept intact, as if you were a passive entity moving through a balanced world, which is pretty much what it boils down to anyway. It feels as if there are equal parts of black enemies, black bullets, white enemies, and white bullets.

And speaking of passively moving through the world, there comes a point in Chapter 2 wherein there is a wall of impenetrable and polarized blocks, none of which can be destroyed following the way of the dot eater.

The solution is ingenious, involving the precise positioning of your Ikaruga in between the cracks of any two blocks - a feat with a grace window of only a few pixels. The result? You effectively grant yourself a joyride through wall after wall of obstacles, as if you're behind the scenes, watching the play unfold from backstage. Demonstration here. I still wonder what it would feel like to dot-eat through Chapter 5, but something seems to continue stopping me every time.

Below is a complete DotEater run through Chapter 1, executed pretty nicely. Keep in mind that the experience I described above won't be seen in this video - you really have to go play for yourself. Not to worry, as the game is available on Dreamcast and Gamecube as a collector's item, as well as on Xbox Live Arcade for the why-don't-you-own-this-already price of $10.