"My point is basically to share my love of music," explains dev Simon Lachance in this dive into how he came up with and designed the hellishly rhythmic levels of Just Shapes & Beats.
Phill Cameron
Blogger
July 19, 2018

"I went to a chiptune party in a bar and randomly bought an album from the artists playing that night. Turns out it was Parallel Processing by Danimal Cannon & Zef.  I fell in love with the album and told myself ‘I need to make a game out of that.’  6 months later there was a game jam here in Quebec where I made the very first level based on the song ‘Chronos’,”

Just Shapes & Beats drops the player into deadly obstacle courses born from chiptunes and EDM tracks, creating traps out of the beat and flow of the music. The process of turning these songs into stages where players avoid visual effects involved a search for a theme within the music, or an emotion evoked by the song. Within each of the tracks, Lachance found a form of moment he could work with, turning it into a level based on the theme he could hear within the music.

These themes were further shaped using a set of three rules that would form the backbone of the entire work, helping the developer work through creating any given stage. “The level creation is the most difficult thing I ever did.  My rules were that the level has to be visually beautiful, it has to follow the music, and the player needs to know what is coming up (to avoid cheap shots),” says Lachance.

In sticking to these rules, Lachance could take music and turn it into an inhabitable space, one players could delight in dodging through together.

To begin the process of stage creation, Lachance would listen to several tracks while seeking out a certain theme buried within the song, or some sensation that would strike him for the music. “To be a bit more technical, it starts with me listening to a bunch of songs. Usually, after a single hearing I have a rough idea in mind that I know I want to play with,” says Lachance.

“With ‘Dubwoofer Substep’, for example, the beginning feels like a cavern theme, with drops falling from stalactites. I did exactly that. After seeing lots of drops falling down, it gave me the idea of forming a huge pool of water ascending,” he continues.

"My point is basically to share my love of music."

When Lachance found his theme, he could then start to build on it. In this example, one can already see the developer working to build onto the idea of water drops falling down, giving players the drops to dodge, but also a steadily rising water that would cut off the bottom of the stage from them. Still, the idea could be taken even further, with the developer working to add to the stage’s mechanic even more.

“Now, I always try to keep a single concept per level, but try to find different ways to exploit it. This one was ‘stuff falling in water’. So, when the beats start to get more aggressive, it starts to drop stalactites as well,” says Lachance.

All the while, Lachance is having a bit of fun with the visual hazards as well. “And when the music goes apeshit, I just go nuts and exaggerate like I child. ‘LASERS PEW PEW BANG!’. Having 3 kids helps thinking like one [laughs]!” 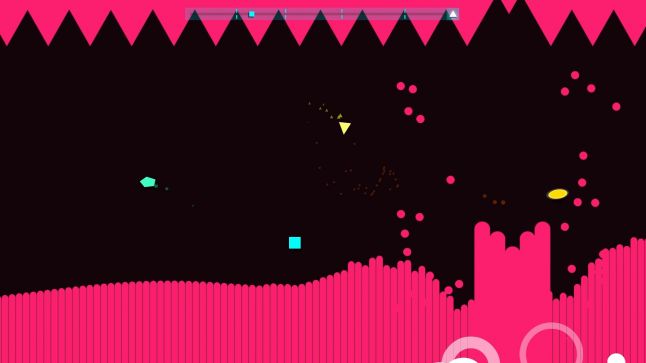 Droplets and stalactites made for an interesting stage theme, but sometimes a mood would also strike Lachance.

“Another example would be ‘Try This’. The song really felt like a James Bond scene, so we straight up made a nod to the famous James Bond intro,” says Lachance. This secret agent feel helped jog Lachance’s creativity, building up a scenario and storyline in his mind.

“I wanted that song to feel more like you're getting on the offense, like an infiltration, camera looking at you, spotlights roaming around, etc, so I made the circles going around in an oval pattern like a prison guard searching for an escaping prisoner," he continues. "Then, to follow the infiltration theme, I thought about having to go out of bounds of the game. Kinda like that part in Portal. So, I threw several pillars and gears into the level to make a mess that you have to go through. Finally, to follow the infiltration theme, I added the cartoon-esque diamond to steal in the last room, where you get caught for the massive musical drop.”

The feeling of ‘secret agent exploration’ the developer got from the song gave the developer several ideas for heists, infiltrations, searchlights, and more, building on that feel or sound the developer originally got a sense of when listening to the song. It would take a mood and turn it into a playable space.

This style of thematic search and building could work for any of the tracks Lachance created, allowing him to find a feeling within just about any song and then build upon it.

“I actually would love to see if I could apply the same concept to other music genres. I even have a level in mind for Beethoven's 7th Symphony, 2nd movement," he says, with a laugh. "My point is basically to share my love of music. Chiptunes/EDM was new to me so it felt fresh and exciting to work on it."

Lachance wasn’t just putting stages together willy-nilly based on feelings he got from them, though. He had a series of rules in place while designing stages, and these would ensure a solid, fair, challenge for players while also giving them a visually-appealing light show to play through. While these rules might all carry different weights, they all were part of the spirit of what Just Shapes & Beats would become.

For starters, the effects needed to be visually beautiful. For inspiration for these shapes, the developer looked all around him in the world, searching for striking sights anywhere and everywhere in his daily life. “In my day to day life, whenever I saw a pretty pattern (on the floor, on a wall, on a commercial sign, on TV, etc.) I took a picture of it. I filled a folder with those shape patterns and picked up random ideas to play with for new levels,” says Lachance. 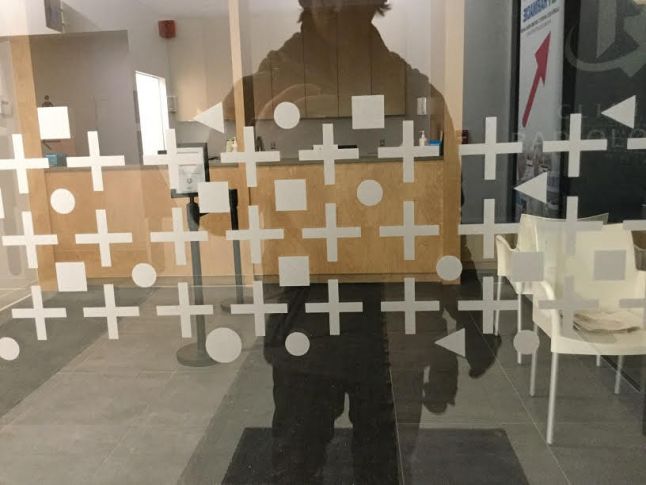 “I noticed that, in general, when a certain shape is repeated evenly through the screen, it makes the brain happy. I don't know how to explain it [laughs]. I lack the design vocabulary here (I'm a coder first).
You can see in the examples: me waiting in line in a boring government office for errand X, noticing a pretty pattern [embedded above] on the wall. [Below], a random cushion my wife bought that haunted me until I made ‘Cool Friends’’s pattern,” he continues. 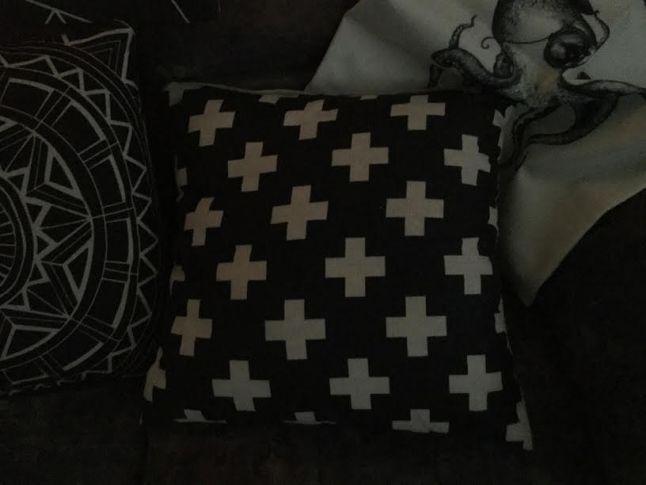 "I noticed that, in general, when a certain shape is repeated evenly through the screen, it makes the brain happy. I don't know how to explain it [laughs]. I lack the design vocabulary here."

These ideas armed him with dozens of ideas for shapes he could implement into the stages the songs inspired. There seemed to be no shortage of striking patterns, either, giving the developer a great deal he could incorporate into a stage. “It is wild, the amount of simple shapes pattern there are in our day to day life. It reminds me of that The Witness video where you watch Jonathan Blow seeing inspiration for his game on his day to day life. The very same happened to me!” says Lachance.

From there, the developer had to keep his shapes on beat, which he did with his own internal sense of rhythm, setting up each enemy and shape by hand. “I've created a level editor to help me place the enemy on beat. What I ended up doing is binding a key on my keyboard to a specific enemy, and tapping that key to the beat. I preferred to manually edit every level instead of a procedural approach, because I wanted to have a unique feel for each level. It would be impossible to teach the computer to create a boss that grow arms and dance to the music while shooting lasers from its eye,” says Lachance.

For those who wish to see this manual tapping in action, Lachance has a few examples on his YouTube channel to make his methods clear. “I have a video on YouTube showing off the level editor. I streamed about it several times. You can see me having fun with ‘Darude Sandstorm’ on my stream [laughs]!”

Finally, the developer would ensure that the levels would feel ‘fair, which involved more tweaking and balancing, working with hints and behaviors that would teach them how things would work. “Those rules are in order of priority. I always started to make the levels visually beautiful, and then squeezed my brain to make them playable and follow the music. A good example is ‘Cheat Codes’ by Nitro Fun. We came up with the idea of the ‘squiggly square’ (I don't know how to describe them better [laughs]). The square shoots in 4 directions in a cross pattern,” says Lachance.

“So, the first thing we do is put the square in the middle of the screen, and make it shoot right.  The player is always on the left side of the screen at the beginning of the level, so it's easily avoidable.  The point is to teach to the player the enemy pattern in a safe environment. We shoot in a couple of directions again, and then makes 3 different squares. Same thing - we shoot in a way that is easily avoidable, but a little harder,” he continues.

Here, we can see Lachance teaching the player how the hazard works, taking various steps to ensure they would understand what to do about it before making things more challenging. This way, the player would feel the challenge was fair, as they’d been taught everything about it in advance.

In this, we can also see all of the rules in effect. Lachance has started off with his striking visual effect, in this case it’s a shooting square. It follows the music by shooting along with the beat of the track to meet the criteria for his second rule. Following this, it behaves in a way that it teaches the player about the hazard’s ability in a fair way rather than simply dropping in on the player and blasting them. The player has witnessed the effect, seen its behavior in how it’s in tune with the song, and knows how it will attack them from a safe space. From there, Lachance is free to challenge the player.

“Then we start to exploit that mechanic. A line of huge squares on the edge of the screen, a huge square in the middle that spins & shoots, flying rotating squares coming from the sides, etc. My favorite levels are the ones that use a single concept/enemy and iterate on them like this. It's a good way to come with ideas that doesn't go in all direction. Constraints are your ally,” says Lachance.

Once Lachance has all of his rules being followed, he is free to build upon that single concept in challenging ways, creating splashes of vicious attacks along to the beat of the music, and periodically going wild with them as the music’s beat rises and hammers at the listener. This creates the kind of beautiful dance that each song becomes, using the feeling or theme of a song and using fair patterns, striking shapes, and attacks on beat.