How Six Ages builds a game around the power of myth

For a medium that revels in depicting heroes, games really aren’t so hot on depicting myths. Designer David Dunham explains how he's tried to change that with King of Dragon Pass and now, Six Ages.
Phill Cameron
Blogger
August 22, 2018

For a medium that revels in depicting heroes performing heroic tasks, games really aren’t so hot on depicting myths.

Sure, the subtle shading of mythology can exist alongside a game, like the dark history of Anor Londo in Dark Souls, but when it’s meant to be directing its substance, providing drive and goals, myths’ inherent mystery and dreamy suggestiveness tends to crumble into confusion. Players tend to need objective facts to work with.

How to weave mythology into a game was one of the challenges A Sharp faced when it was developing 1999’s King of Dragon Pass and, more recently, Six Ages: Ride Like the Wind, released in June. Both these story-based management games have players run a clan living in Glorantha, a fantasy Bronze Age world, first imagined by RPG designer Greg Stafford in 1966, where mythology is a way of life.

An instrumental part of both games is performing prayers and rituals that are dedicated to its pantheon of gods. These are presented to the player as necessary day-to-day activities, and a big part of the game's challenge comes in understanding who the gods are, and what they stand for and like. This idea is particularly sharply drawn in King of Dragon Pass’ heroquests, during which a player must choose a character from their clan to walk the path of the gods, reenacting myths in order to gain their associated gods’ blessings or special magical items.

“When Greg Stafford writes about it, it’s really hard for the heroes, because they’re not gods and they don’t have the same powers, even if they’re heroic,” says King of Dragon Pass and Six Ages designer David Dunham. “And on top of that, the myth that we get as a map to that place isn’t necessarily accurate.”

"[The unpredictability of myth] was one of the things that was really difficult to put across in King of Dragon Pass, and we had similar issues in Six Ages."

That’s because all myths are slippery. They’re intangible and unpredictable, and since Greg Stafford conceived Glorantha to reflect those properties of myths, that’s how they come across in King of Dragon Pass and Six Ages, complete with Stafford’s interest in the ‘heroic quest surprise’, where the hero – and player – might know the story of the myth, but find something else happens that they’re not prepared for as they try to reenact it.

“That was one of the things that was really difficult to put across in King of Dragon Pass, and we had similar issues in Six Ages,” Dunham says. How can you introduce unpredictability in mythic stories that doesn’t feel arbitrary?

In King of Dragon Pass’ heroquests and in Six Ages’ equivalent rituals, players select a character from their clans to reenact a specific myth, and then they face a series of multiple-choice encounters in which they make choices about how the character will react to the way the myth unfolds, attempting to follow the actions of the original mythic hero.

So when the Eater of Skin sings the Rending Song, causing those around it to uncontrollably bleed, the character can try to spear it in the eye, let it tear them apart, or blind it with their brightness. Some choices are better than others – some might lead to death – and others might be affected by the character’s skills, but the original myth is a guide for what the character should do.

King of Dragon Pass introduced unpredictability, however, by writing events into the sequence that don’t follow the original myth. “In effect, the heroquest surprises are baked into King of Dragon Pass,” says Dunham. “So eventually you’re, ‘OK, we always have a Storm Bull show up in the middle of Orlanth and Aroka.’ It’s not in the myth but it’s in the game and it’s always in the game.”

Since you can attempt heroquests as many times as your clan can bear, that hardcoded nature rather undermined the idea that myths should be unpredictable, so with Six Ages he decided to try a different tack. Here, you’ll find the events of the myth don’t quite marry up with the story you’ve learned. “It doesn’t radically change things; it was just a way to show that the mythic world is really not predictable.” 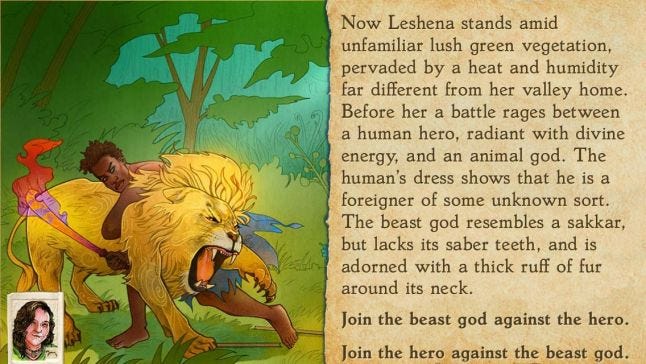 A hero makes a choice during a ritual in Six Ages: Ride Like the Wind

To prevent such capriciousness from becoming frustrating, it was important that both games indicate what players are doing wrong and why. But how to achieve that while maintaining a sense of mystery? One change Dunham made was to have the character give feedback on what went wrong.

Both games track a player’s failures as they progress through a heroquest or ritual, whether because of bad choices or, more likely, chance, since in the background the game is rolling against character abilities. Both games also have the RPG concept of critical rolls and fumbles. If the character survives through to the end it will comment on your worst failure, statements along the lines of, “I really should never have done that, it was a stupid idea!” or “I tried it and it was really hard”.

“It tells the player that maybe that hero wasn’t the best choice, that they’re not the character who can best overcome the might of a dragon, because their combat rating is low,” says Dunham. “You can’t really know that in advance if you’re coming from within the world, but you might have an idea of it, and that’s what the advice is about. Until you do it, it’s all theoretical, and then you realize, ah yeah, that was a hard thing, it sounded [like] a good idea but I guess it was stupid.”

It’s very important to Dunham that all such meta commentary exists firmly within the world. He never wants success rates to be shown in percentages next to choices, but he does want players to be better prepared for their next attempts.

That philosophy extends to the main game, too, in the advice that the characters the player chooses to sit on the clan council give. When story events take place, such as visits by rival clans or lampreys showering from the sky, they’ll provide lines of opinion. 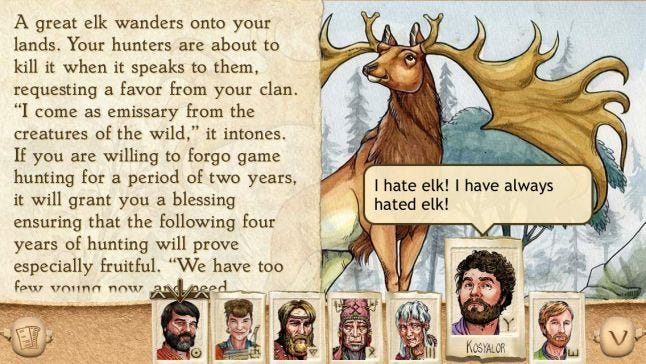 Writer Robin Laws composed all these responses, and since they’re conditional, one of the challenges was knowing how they’d work in context without playing through the scene. He wrote three broad types, with the most crucial being lines delivered by characters with high skill in the related field, such as combat, diplomacy or lore. “Because that’s the ‘good’ advice,” says Dunham. “If you have a high leadership character in your clan circle, they’ll give good leadership advice. That’s why you have them there.”

Or they might provide lines that deliver color, such as how an ancestor approached a similar situation. “They help flesh out the world; we call it storytelling advice. All the characters know it and it may or may not be terribly helpful, but it helps set the scene.”

And then there’s advice that may be good or bad but depends on the character’s personality. A warlike character might even respond to the advice of a peaceful character, accusing them of being foolish for wanting peace. “A lot of personality advice helps show the personality of the characters, and that’s one of its goals, but also what they say might be correct and you should be attacking.”

While developing King of Dragon Pass, it seemed clear that there should be at least five responses for every event, because he didn’t want situations to have clear wrong and right choices. And he definitely didn’t want the same good and bad opinions to come up every time they were encountered, but Robin found it tough to come up with five lines where none were especially good or bad. 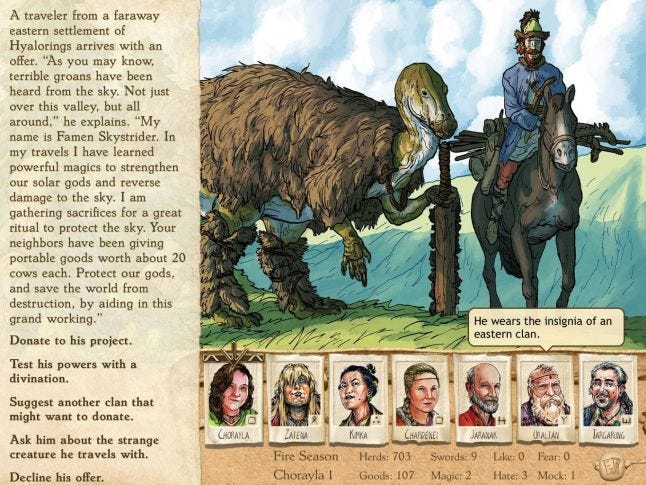 When he played Failbetter Games’ text-based MMO game Fallen London Dunham noticed how it was often able to express a lot through sometimes just two conversation options, so for Six Ages, he pared back the number of required choices. “Quite often we ended up with five because there were five interesting choices and five interesting consequences, but I don’t think anyone missed it. You still have more choices than you can possibly do at any one time. But it’s never a binary thing, the world is more complicated than that.”

But while Glorantha is indeed complex and exists in shades of grey rather than black and white, events, rituals and heroquests have to have clear and practical effects on the player’s fortunes. The myths therefore generally have to reflect how the clan is simulated, such as in combat and the flows of cows that serve both games’ economies.

In the case of one ritual in Six Ages, the myth relates to rivers. Six Ages is set after an ice age has destroyed the city your clan once called home. Generations later, your people, along with many other refugees, have found a new home in a wide valley. But the rivers in this largely virgin land are still ‘untamed’, dangerous for your envoys and exploration parties to cross, so the ritual enacts the stories in which a hero called Reladivus defeated a blue dragon which had flooded his mother’s city.

“Taming can be something you interpret mythologically, which means defeating the dragon, or you could also perhaps interpret it in the terms of engineers building bridges and shifting the banks so there are fewer floods,” says Dunham. Either way, succeeding reduces the risk of crossing rivers and opens up the map to the player.

Six Ages and King of Dragon Pass cleverly express myth in terms of how its people see it while also making it being easily interpreted in a practical sense. It’s rare to play a game that works so well with that duality, and that’s why they depict the nature of myth so well. Says Dunham, “In Glorantha the mythic interpretation is almost always correct, but it doesn’t mean that a more mechanical or scientific one is incorrect.”