There's a good chance that if you've played Super Mario 64 then you've spent a good time goofing off in Nintendo's revolutionary 3D platformer. I'm not talking about aimless exploration outside Peach's Castle, I'm talking about messing with Mario himself.

On top of the weird opening screen where you could pinch Mario's face into weird shapes and directions, you could also make Mario do some weird things in-game. He could duck his head down in front of his legs and creep slowly and even get on all fours and crawl like a baby.

"Mario 64 is one of our go-to reference points for a character that has a fun expressive moveset," Untitled Goose Game designer Nico Disseldorp tells Gamasutra. "The controls can do lots of interesting things and it's fun to press different buttons and make Mario's body move in different ways."

The reason that Mario is so fun to control is that Miyamoto, and the skeleton team of 15 people that worked on Super Mario 64, spent months working to make Mario fun to play, even if the only thing you could do is move around an empty space. "They made the Mario character first, and kept working on just the Mario until it was fun to be him," Disseldorp said. "And only then did they start work on the rest of the game."

Disseldorp thought that was one of the most memorable parts of his time with Mario 64. "It means you can 'perform' using the Mario as a kind of puppet," he said. "When I'm playing Mario 64 next to a friend on the couch I like to show off by making Mario walk in funny ways, or quickly swapping between different poses. I find this kind of expressive and performative play very interesting, and it was something we really wanted people to be able to do with our goose." 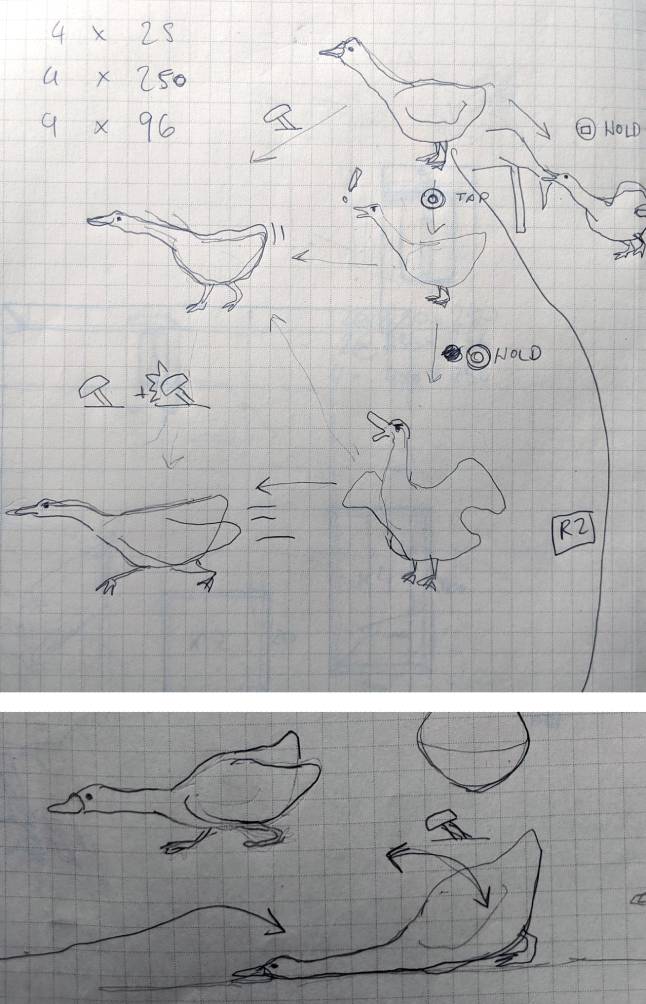 An early sketch of the goose's moveset

While fun, these expressive ways to move Mario are mostly cosmetic. You won't use them to navigate any levels for the majority of the game. Still, they were a fun way to burn some time in the Mushroom Kingdom.

"Originally we had thought about trying to give the goose a moveset with a few weird esoteric possibilities more like what Mario 64 has," Disseldorp said. "For example, at one point someone suggested you should be able to make the goose lie down on the ground and roll around like a pin. That sort of thing."

Those esoteric abilities would have been similar to Mario 64 in that they were a fun way to mess around in-game, but it wouldn't help much in actually completing the tasks the game put in front of the player. "As the game developed we realized the comedy in our game was much more situational and naturalistic, and these kinds of 'weird' moves weren't going to fit," Disseldorp said. "We also found that people were playing in a more performative way when the controllers were clearer and more straightforward."

"So rather than have the body surprise the player with the moveset's possibilities, we tried to give as much clarity as possible to the player," he added. "This led us to create a much simpler moveset. The direction we settled on was to have each button do one clear thing but to make sure each of those things could be combined independently so that there was still a wide possibility space. So, for example, you can waddle slowly with your wings in and neck down, or run with your head up and wings out."

That led to the ability to run with your head up or down, with your wings spread out, sometimes holding an object like a beer mug or a toy airplane. Things that were coupled with gameplay, picking up low objects by putting your head down or unlocking gates by bringing your head higher, that led to naturally funny situations as you play as a goose who terrorizes local townsfolk.

Untitled Goose Game shares a bit of DNA with Super Mario 64. House House developer Jacob Strasser has said the core idea of having a list of things to complete loosely came from the list of power stars from Super Mario 64. More inspirations, including ideas from Katamari Damacy, GTA IV, Noby Noby Boy, Tony Hawk's Pro Skater, Dark Souls, Hitman 2016, Metal Gear Solid V, Getting Over It With Bennett Foddy, My Summer Car, found their way into the game.

All of those games inspired it for different reasons, the stealth gameplay clearly took cues from Kojima for example, but Mario's goofy antics in Super Mario 64 were one of the only influences that helped lead House House to their Goose's weird, eccentric, and hilarious performative design.