“There are certain things we can't tell you or just don't want to tell you," says lead designer Alex Preston. "We want to show you, and we want to make you learn, so you can feel accomplished.”
Phill Cameron
Blogger
April 08, 2016

The recently launched Kickstarter success Hyper Light Drifter begins with a veil of mystery about it. There's no clear sense of where to go when you're first dropped into its open world. You're only taught a few basic moves before being thrown against waves of enemies. The goals and the storyline are cryptic.

The game has garnered great reviews and has stayed solidly fixed on the Top Steam Sellers chart. Its players seem excited to charge down mysterious dungeons, only to die over and over again.

How do you design a game where you deliberately reveal as little information to the player as possible, while still building a space where they understand how to progress and survive in combat?

Many developers dream of creating such a game. The popularity of Dark Souls suggests that players want to explore mysterious settings and endure punishing combat encounters in the name of a more challenging experience. But all too often “mysterious worlds” and “difficult combat encounters” can leave players flummoxed and dispirited.

For Hyper Light Drifter, lead designer Alex Preston chose to solve this problems by constantly asking himself and his teammates at Heart Machine a simple question: What’s fair, and what’s unfair, when it comes to designing scenarios and levels?

A Bunch of Stupid Monsters Can Become a Smart Horde

Preston starts describing Hyper Light Drifter’s quest for “fairness” by focusing on the game’s combat. At the outset, you aren’t given a lot of clues about how fighting works. A short tutorial sets up the rules about attacking, recharging your gun, and dashing. Then you’re off, ready to be smashed by whatever creature stands in your way.

With so little other information available to the player, Preston says he and his team had to convey as much as possible through immediate visual clues, like creature silhouettes and windup animations. And in those windup animations, Preston says player feedback began to reveal something about how they could best structure enemy encounters.

“Even if an enemy has a slow windup, and even if an enemy is stupidly easy on their own, we had to learn that unless it’s a Boss, we can’t have an enemy be smart one on one," he says. "We  have to dumb it down, because as we add more enemies, that situation becomes exponentially more difficult.”

Preston describes one canceled enemy type that was designed to deflect all player bullets and parry their basic attacks. It proved to be impossible to wrangle when paired with even the simplest of other enemies.

The Heart Machine team developed a specific mindset on the value of grouping enemies together. “Combat scenarios are puzzles because you have to figure out the best approach to handle these different attacks coming at you,” says Preston.

Preston feels that with modern games, tutorialization now means “aggressive hand-holding.” The Legend of Zelda: Skyward Sword in particular irks him, as the player is consistently guided through exactly what to do by their prattling sidekick character. This kind of design, Preston says, doesn’t arm players for dealing with major challenges.

“There are certain things we can't tell you or just don't want to tell you," he says. "We want to show you, and we want to make you learn, so you can feel accomplished and so you remember it.”

Much of Preston’s inspiration for Hyper Light Drifter comes from classic Nintendo titles on the NES and SNES, and how they handled tutorialization. He praises classic Mario and Metroid titles for building entire stages oriented around teaching basic abilities.

“People forget they can recharge their gun by slashing at things," says Preston. "We made that text linger for a while, but still people go 'Oh, I forgot about that.’”

While Preston describes ‘fairness’ in terms of combat and difficulty, he says it also applies to level design as well. In Hyper Light Drifter, knowing where to go and understanding the objective of each major space can be as challenging as battling a horde of monsters. While the game gives a few verbal clues, (such as another ‘Drifter’ character marking major objectives on your map), Preston says drawing from the first Dark Souls helped him and his team anchor a compelling sense of interaction to simply figuring out where you are. 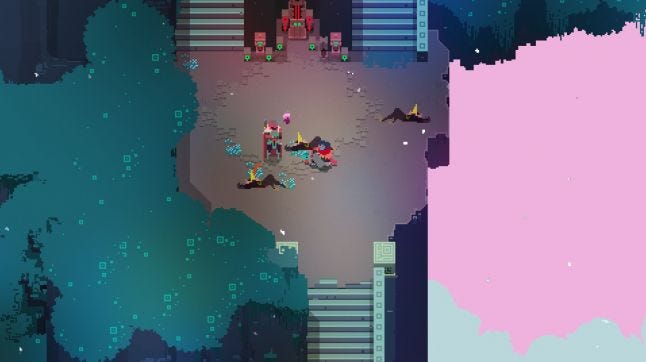 “It’s because of how heavily stacked that world is," he says. "It's a huge vertical stack of interwoven and unlocking chambers and doors and successions of hallways. That stuff just links back up and suddenly you end up [in a familiar space], and you start having epiphanies, and you say 'that's how this world works.'

This helped the Heart Machine team turn each of the four zones (referred to only by their cardinal directions relative to the center town), into a distinct shape for players to figure out. He says that the biggest danger of open-ended spaces actually isn’t players becoming lost or stumbling into the wrong area--it’s that players become overwhelmed with possibilities. “Originally, we didn't have a lot of locked doors," says Preston. "We didn't have paths blocked off. You could go anywhere at any time.”

“Without a specific set of goals, and without an explicit sense of what you're looking for, that stuff becomes really tiresome," says Preston.

All of Heart Machine's work then, builds to a single promise---Hyper Light Drifter will assault you, confuse you, and punish you, but unlike your parents and teachers, will at least promise you that life will be somewhat fair.