How Darkwood's visibility mechanics create a new kind of horror

"Darkwood was made by three people, and we're all scaredy-cats,” dev Gustaw Stachaszewski. "“We find it much more engaging to experience horror that stimulates our imagination."
Phill Cameron
Blogger
June 06, 2019

Alone in a decrepit building, swallowed whole by a forest that is simultaneously encroaching and expanding, a stranger inhales the hideous waft of a myopic decoction cooked up to imbue them with curious powers.

With dilated pupils, they begin to drink in the desolate landscapes that assimilate into an illusory horizon, as the limited field of visibility causes the world to implode into a microcosmic sphere of darkness and terror.

Developed by Acid Wizard Studio, Darkwood is an indie survival horror game set in a Soviet Bloc-cum-supernatural forest. These woods are plagued by a perpetual darkness, and even when the stars subside and the sun rises to combat the forces of night, the world is obfuscated by an eerie hue of murk and opacity.

“When we were starting work on Darkwood, the overwhelming trend in cinema and games in the horror genre was using jump-scares as the tool to make the audience feel fear,” Gustaw Stachaszewski, one of the three developers of Darkwood, tells me. “The reaction to sudden auditory or visual stimuli is a very basic survival mechanism shared by all species that have to protect themselves against predators, and as such is accompanied by elevated heart rate and an adrenaline rush.”

Going beyond the jump scare

Although jump-scares have become a staple of traditional horror, Darkwood actively eschews them for a more concentrated, psychological brand. Instead of having monsters jump out at you from behind locked doors, it allows you to see the movement of objects in the distance without displaying what it was that moved them.

You know something is there, and you can see the evidence of its presence, but because the exact details of the movement are eclipsed by an invisible veil, the entire idea of what constitutes a jump-scare in the first place is completely subverted.

“Jump scares are effective and entertaining to experience yourself or to watch someone else react to them, especially your favorite streamer,” Gustaw explains. “But to us, the overuse of such tactics feels shallow.”

However, Acid Wizard’s reluctance to use jump-scares runs far deeper than merely viewing them as a cheap stratagem. Although the team consider them to be cursory, their implementation of alternative systems comes from somewhere else entirely. 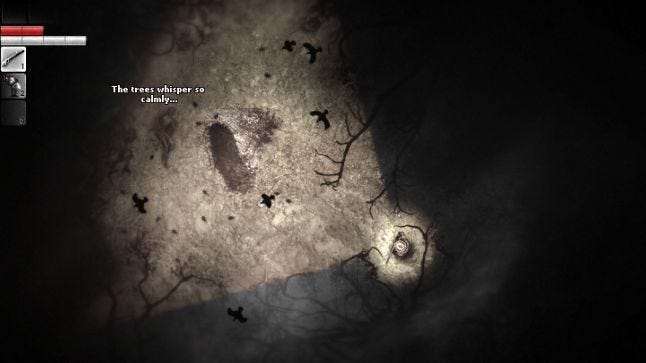 “Darkwood was made by three people, and we're all scaredy-cats with pretty wild and vivid imaginations,” Gustaw tells me. “We find it much more engaging to experience horror that stimulates our imagination and lets our minds fill in the blanks, instead of just having it thrown at our faces. So when we saw the potential in our game to create a unique atmosphere of dread, we pursued it.”

The most apparent form in which Darkwood subverts the idea of jump-scares can be seen in its tight restriction of field-of-view mechanics. However, this wasn’t necessarily planned when Acid Wizard first consulted the drawing board.

"It was meant to be a simple tower-defense game"

“The creepy potential of Darkwood's field of view mechanics were not apparent until we actually saw them in action,” Gustaw explains. “You see, Darkwood did not start out as a horror game. It was meant to be a simple tower-defense game where you protect your home base during the night and rebuild during the day. This idea stayed with Darkwood till the end, but it was massively expanded and moved towards horror and weird things going down instead of fighting off waves of monsters.”

Despite how successful Darkwood’s implementation of horror is, it came as an afterthought to a game that was initially interested in completely different systems. Mechanical innovation ultimately begot a realization that the game was already inherently capable of delivering a unique brand of horror, and so Acid changed its direction and reappropriated Darkwood into a completely new form.

It was at this point that Acid began to experiment with visibility mechanics specifically.

“At the beginning, when we were playing around with the player's field of view, it turned out that seeing (or hearing) objects move without knowing what caused the motion (or sound) was eerily appealing to us,” Gustaw explains. “So we started gravitating towards this idea and experimenting with it.” 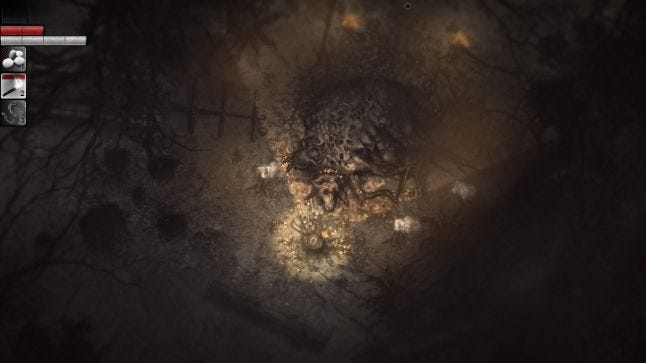 Ultimately, Acid decided to restrict the player’s field of view so that they could only see what was directly in front of them with perfect clarity. It’s as if you’re walking through the woods with a narrow-lens flashlight. You can see ahead of you, but your peripherals are totally obscured, and there’s no way of knowing what’s behind you without shifting your view and allowing yourself to become vulnerable from other directions.

Finding inspiration outside of games

Darkwood’s influences were also texts that maintained a deep interest in obfuscation, darkness, and meticulously-designed lighting that was intended to conceal things at least as much as it was to illuminate them.

“Darkwood was largely inspired by film, mainly by the works of Andrei Tarkovsky, Stanley Kubrick and David Lynch,” Gustaw tells me. “The story was influenced by authors like StanisÅ‚aw Lem and the Strugatsky Brothers, and the gameplay was inspired by the first Fallout games and the Souls games, especially in terms of how we wanted to tell the story.”

All of these sources are heavily concerned with motifs of ambiguity and the Weird, and by channeling these thematic ideas into gameplay mechanics, Darkwood manages to make the unseen visible without revealing any of the information necessary to feel comfortable. It uses a lack of clarity as a system of its own, and that’s what makes its horror singular.

As well as a mechanical obfuscation of visibility, Darkwood is framed in a way that makes its narrative ambiguous too. 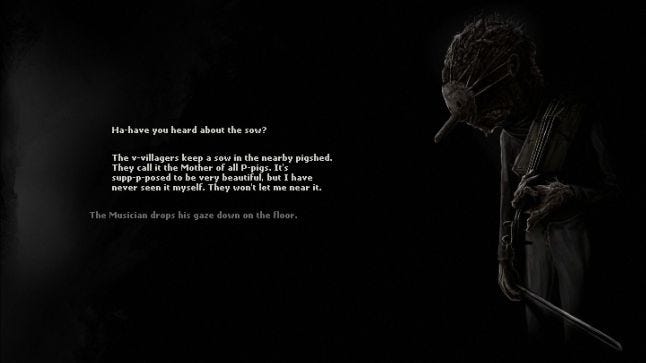 “I think Darkwood is a pretty unique blend of survival and horror, but many people will see it in a different view,” Gustaw explains. “For me, it's a story-heavy game that has survival elements and a fair share of combat, but I've seen many comments (and even reviews) that state that the game does not have a story at all, because it's presented to the player in a way that forces him to connect the dots by himself. So if you're not into that, you might still enjoy the game for its other elements and I think that's just fine.”

Either way, Darkwood’s horror is delivered in the forms of the things you can’t see, and the details that are held within implications as opposed to explicit narrative points. It’s fragmented and uncertain, but that’s because the world has descended into fragmentation and uncertainty.

On the inspiration for Darkwood’s horror mechanics and story, Gustaw stated that the majority of the game’s content came from the experiences of the developers themselves.

“Making great work is often the result of dealing with your own self,” Gustaw tells me. “Your fears, dreams or events in your life that had a profound effect on you. Many great horror authors have lived troubled lives, or experienced traumatic events. Stephen King witnessed the tragic death of his childhood friend. StanisÅ‚aw Lem saw many atrocities done by other human beings during and after World War 2. Their work is often the result of trying to cope with those experiences.

“So dig deep into the darkest corners of your mind and confront your demons,” Gustaw concludes. “Forge them into a story or experience that only you can tell.”