Art Sqool puts you in...an art school. You're assigned projects, you complete assignments, and a teacher grades your work. But the game's not as pedestrian as it may sound.
Kris Graft
Publisher
February 20, 2019

Art Sqool is a game that puts you in an art school, giving you artistic prompts and grading you on your performance. It’s built to inspire the player in moving past the daunting feeling of the blank canvas, helping them find inspiration through the game’s places and paintbrushes.

Gamasutra sat down with Julian Glander, creator of Art Sqool, to talk about the thoughts that went into creating a world built to draw out creativity from the player, designing prompts that would help the player get started, and giving the player fun tools that help them express the visions in their heads.

The game actually started last spring as a completely different prototype about a girl driving around in a super cute pink car, searching for her lost dog in a pastel cityscape — basically a gentle GTA. The first assignment was that the player would draw a “missing dog” poster that would show up on telephone poles throughout the game. That ended up being the most fun part of the game, so I rolled with it.

I really like the feeling of drawing with a chunky, pixellated digital brush, and it’s something I’ve wanted to put into a game for years. As someone who works as an illustrator/animator, drawing and creativity and the process of art-making are obviously a big focus of mine. And I think those themes have been traditionally under-explored in games. There are a few standout examples that I kept thinking about, like Mario Paint and Pokemon Snap, but the number of games where art is the underlying mechanic are kind of few and far between.

I really want Art Sqool to explore some questions about creativity and inspiration, which sometimes feels so magical and ethereal, and how you can fit that into a computer game, which is such a rigid and binary system by definition. 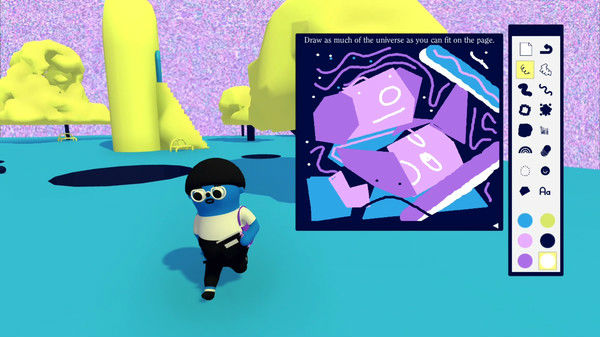 The mystery behind the AI art teacher

Ehehehe…. Every time I’ve watched someone stream the game, they’ve had a different wild theory about how the AI works. I’ll reveal the truth eventually, but I kinda wanna keep it top secret for a little while longer.

Creating places that spark the imagination

I guess for this one I mostly looked outside of games. A lot of design choices were inspired by outdoor sculpture parks. We have some good ones in the NY area — Storm King and Dia Beacon upstate, Socrates Sculpture Park in Queens, and I was also a little inspired by the Pratt campus in Clinton hill which has a lot of cool outdoor artwork.

The thing that all these parks do well is play with scale, creating huge larger-than-life moments to soak in as well as little things to discover.

The layout of the Art Sqool campus, which is divided into a bunch of floating islands in space, was inspired by mini golf courses, as well as the game Super Monkey Ball. I love how in both of those scenarios you have an area that you’re supposed to be focusing on, but you can see other parts of the game in the distance. There’s something really mystical about it.

The Art of the Art Assignment

It was important that the prompts had variety. I wanted a mix of tangible, easy-to-process assignments ("Make a geometric shape composed of exactly ten lines"), some that were a little more conceptual ("Listen to the room you're in and draw the sounds") and some that were just totally bonkers ("Draw what it would look like if two of your friends had a baby"). I kept a running list in the notes app on my phone for a few weeks, adding a prompt or two any time something inspired me.

I was really inspired by a book called Draw It with Your Eyes Closed: The Art of the Art Assignment, which contains interviews and essays from a ton of working art professors. I read this book about five years ago, but I was scared to read it again as I made the game because I thought it might influence me too much. So I kind of half-remembered it.

The biggest influence on this game is probably the 90’s classic Kid Pix, a kind of lo-fi wacky drawing program for kids with a lot of personality. Some of the brushes, like the stamp and wiggle brush, are lifted directly from there.

But a bunch of different project ideas came together into Art Sqool. I really don’t love sketching, but it’s a crucial part of working as an illustrator, so a few years ago I had the idea of making an internal app that had better sketching tools specifically tailored to my process.  The Shapemaker brush, which turns any squiggle into a geometric shape, is a tool that I originally played around with for that project.

The idea of Art Sqool was that the game would give someone just enough constraints to get over the fear of a blank canvas. The limited colors, brushes, and a specific prompt are all designed to come together into a jumping-off point. From there, it’s really up to the player how they want to engage. 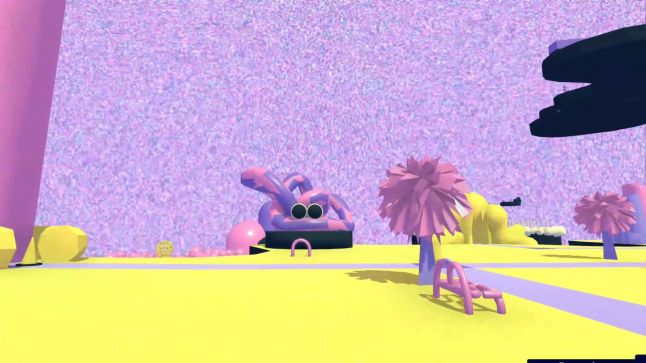 Songs to focus and dream with

I like to listen to shoegaze and dream pop while I’m working on my art. I think there’s something about the dreamy tones and layers and layers of noise that make it really good for focusing. So, that was a big influence on the soundtrack, with the dreamy washed out guitar chords and droning synths.

I was also a little bit scared of doing a soundtrack that sounded too “video gamey”, whatever that means. In my mind, the game already has kind of a 90’s look to it, so I thought the bleepy bloopy chip tune sound would be overkill. A big theme in the game is automation, so it made sense to automate some elements of the music — I used garageband’s Magic Drummer to auto-generate the beats based on a set of parameters, as well as a lot of randomly generated arpeggiators, and of course the vocaloid, which is a computer singer.