Part of the problem with procedural generation is ensuring the content is both interesting and challenging across multiple playthroughs. Genetic algorithms offer us a novel solution to this problem.
Patrick Kelly
Blogger
September 04, 2018

1 A basic explanation of genetic algorithms

A simple example of creatures generated with a genetic algorithm.

While this is just a rough example of the behavior there are a few interesting things to note, first off the total possible items within the search space is (26 letters+10 symbols+1 null character)7 or 94 931 877 133 possible permutations and it took substantially fewer iterations for us to reach our goal than if we had simply brute forced all possibilities. At each generation a fitness function is used to determine the quality of the string and it is then derived from it’s ancestors and mutated by a chosen factor.

2 Why care about this in games? 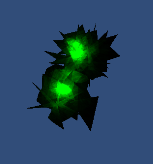 Part of the problem with procedural generation is ensuring the content is both interesting and challenging across multiple playthroughs. Genetic algorithms offer us a novel solution to this problem: through fine tuning of the fitness function and pretesting content prior to it being presented to the player, you can ensure certain standards to within a targeted margin of error. While this approach to procedural content can result in a situation where unexpected results occur, a carefully designed fitness function should be able to ensure that only viable content is presented.

You could likely teach an entire graduate level course on this stuff so I’m not going to get into the proofs and other high level complexities but lets look at a simple implementation to get started. There are only a few main steps that need to occur for the algorithm to work correctly.

3.1 Generate an initial value or set of values

You will need a starting point, in our current project (to be announced) we are using some real world approximations to generate monsters so a random genetic string would look like this:

Well that probably looks pretty scary so let me explain what is going on here: our system uses two methods of search space manipulation to generate procedural creatures. First, each child has two parents and receives a genetic string from each supplying one half of their genetic data. These string are then mutated by a variable amount. What this means is that this massive text block actually contains two copies of each data point needed to generate a creature, each one inherited form a different parent. The final bit of the string denotes which side of the chromosomal pair is dominant for each of these data points.

3.2 Check the Fitness of the Initial Random Data

We will first of all need to check if the starting data is valid, if not we will need to regenerate it. This is to stop a broken creature from being presented to the player in the game. Were we only concerned with the search space this would not be necessary. Our base fitness function is pretty simple it just checks to make sure the creature has limbs and a body. In this data, a single data point is made of 4 characters and each chromosome or collection of data points defining a part is made up of 15 data points. The final section of the data that defines the dominant chromosome tells use which one of the two at that relative position to look at. For example, in the first chromosome position the dominance value is 0 so the first ancestors contribution will be used, while in the second position the dominance value is 1 so the contribution from the second ancestor will be used.

We need at least two creatures under this model to get things started so we will need to repeat the first two steps to get a second one. Once we have our two parents we can breed some offspring. The breeding process takes two entities that have already passed the fitness function and samples one half of each genome. Since every creature contains the instructions of two full sets of chromosomes, only one of these chromosome sets will be passed from each parent to make a new entity that has two chromosome sets, one from each parent. Once we have derived the resulting offspring we can apply a mutation to it based on a series of rules to allow further genomic drift. Finally we check this against our fitness function to make sure our work has not resulted in a broken creature. We can repeat this breeding process using the new creature as one of our two parent entities if we wish.

Let’s look at an example of how this works. Figure 3.1 and 3.1 show our initial creatures that we will use for breeding. These creatures are comprised of a very simple structure where each chromosome only contains one data point comprised of 4 characters. We will start with these input creatures:

Now that we know what our parents look like we can create their input that will be used to create an offspring. Each parent needs to provide a complete set of chromosomes. Reproduction swaps data points between the left and right sequences of the parents genome. This can most simply be achieved by randomly taking inputs from their left and right sequences.

For the next step, we will assign the input chromosome sequences to left and right value sets and then determine which side of the chromosomal pair is dominant. The simplest way to do this is to assign random true/false values as a flag for each chromosome. This gives us the final entity outlined in figure 3.5.

But this has not been mutated at all so we are not quite done yet.

Without mutation, the algorithm can never get chromosomal values that do not already exist within our potential breeding pool. From the perspective of a search algorithm, not being able to find some integral part of the correct answer is a critical flaw. Generally one of the big efficiency tuning parts of a genetic algorithm is adjusting the mutation rate. For simplicity I’m just going to use a 10% mutation rate to provide an example. Since we have 24 pairs (or characters) in our sequence we will take the floor of the total number we should mutate Floor(24*0.1) number of points to make changes to these can be selected randomly as can their new values. These changes result in:

It is worth noting that due to only the dominant chromosome being the one that is present, only the first alteration will be visible in the potential answer since the second one is on a recessive c