Gaming Without Barriers: Why we need to include Accessibility in the concept phase of game development

Accessibility in gaming is gaining more awareness, but there's still a long way to go. I want to share my experiences with making our game accessible and provide a few tips and links on the topic.
Zein Okko
Blogger
December 14, 2017 When we started to create Code 7, a text-based and story-driven hacking adventure, we didn’t even think about players with disabilities. We knew they existed, but we never considered them. Not actively of course, we’re not bad people (at least we don't think we are...). We just didn't think about it. And sadly, that happens with a lot of developers. We want to change that.

The more happy we were when we released the accessible mode of our game on December 13th. The whole journey started with one single Kickstarter backer who asked us if we could make the game accessible to the blind, as a text-based game it would be predestined for that. And that got us thinking and started the whole process. But more to that later.

Not Your Typical Player?

There are a lot of people out there that don’t play the way you do. As a game developer it is important to consider the variety of players, the beautiful mix of people, the individuality of a person. Of course it is almost impossible to make the game valid for every single one of them. But what if there’s a group of people with similar habits?

According to a study done by PopCap Games, 20% of casual players are impaired.


A total of 13,296 casual game players responded to the survey, with 2,728 respondents (20.5%) identifying themselves as "mildly" (22%), "moderately" (54%) or "severely" (24%) disabled. Of those, 46% indicated that their primary disability was physical, 29% said it was mental, and 25% stated they had a developmental or learning disability. Over two thirds (69%) of disabled respondents were female, and a third (35%) of all respondents had another person -- parent, adult offspring, spouse, guardian or caregiver -- assist them in taking the survey.

That's quite more than you would expect, isn't it? There are not many games for these players, many of them manage to play through games despite the lack of accessibility. Famous example is Terry Garrett, a blind gamer who beat The Legend of Zelda: Ocarina of Time after five years.

Honestly, what would you do? As a kid, I couldn't understand English and I still played English games, despite not understanding a word. I somehow managed. My passion for games was greater than the language barrier. And imagine how it would be if it was still like this, you still don't speak the language of the game. You would still try to play it, wouldn't you? But it would be nicer if the game was in your language, so you could fully enjoy it. This is probably how many of the impaired players feel.

Fortunately, accessibility is getting more recognition, which is wonderful. Lirin, an AudioGames-user, who also happens to be one of our accessible mode testers, compiled a list of mainstream games with accessibility. Also indie games are aware of the topic. On Itch.io for example you have filters for accessible games. It's great to see that AAA companies are considering impaired players. Karen Stevens, EA's accessibility lead, even reached out to me on Twitter to let me know that quoted texts in the AudioGames forum are not recommended and leads to users skipping / ignoring my posts (because of lots of repeating texts).

As mentioned above, it all started with a message from one of our backers and a simple question: Can you make the game accessible for the blind?
We thought about it. Yes, actually we can. It's mostly text and the whole game is about imagining things, rather than seeing them. So Kevin looked into what we could do with Unity and quickly came up with a first prototype.

The game's dialog was already voiced, so we only had to take care of the interface. For us this was completely new territory, we had no experience in that field whatsoever, but we just tried. Even though we couldn't translate all of the game's elements to the accessible mode, we managed to release a version that was close to it and we received great feedback from the AudioGames community.

We were struggling with the hacking mini-game, which has multiple visual components at the same time in real-time and multiple moving directions. We thought a lot about how to translate that part. It was possible to use spatial sounds, but the game was not created with 3D sounds in mind. We would have to redo a lot of systems and audio sources. As a two-person studio developing an episodic title we could not afford to derive too much from our development schedule, since our primary goal was to finish the game with all its episodes first.

We decided to skip the hacking games in the accessible version for now and revisit it after all episodes are released. It was a tough decision, since we really do want to have a 100% accessible version with all features but at the current point we couldn't do it.

But Code 7 is not only accessible to vi players. Even without recognizing it, we managed to make it playable for people with physical disorders or dyslexia. The game supports auto-complete and cycling through commands, which means that you can play the entire command-part of the game with the Tab and Enter key and even if you mistype, the game still recognizes the word as long as the first letter is correct. For example, "stysme" will still be recognized as "system" (provided there is no other command starting with "st").

At AdventureX I talked to a dyslexic player. She told me that she wanted to play the game but was intimidated by the typing part and was afraid she would not be able to play the game. It turned out that she could play the game without problems because of the forgiving input system and the auto-complete. That made me really happy!

At SXSW, I watched a player with a physical disability playing the game, who was not able to type with more than the index finger. I told him that he can use Tab and Enter to play the game and he managed to get through it with hardly any trouble.

These two experiences showed me that you can sometimes reach accessibility with a simple change. The forgiving input wasn't even intentional at first, it just happened to be like that and we didn't change it and now we're so happy we didn't, because it can be a great help to many players.

Accessibility as part of the concept phase

Some games are harder to make accessible, some are easier and it's definitely harder to achieve accessibility when the game is already half-way done. I encourage everyone to think about it before developing and about which parts of the game are already accessible. Can you make simple changes to the concept to incorporate inclusiveness or make it playable to more people? 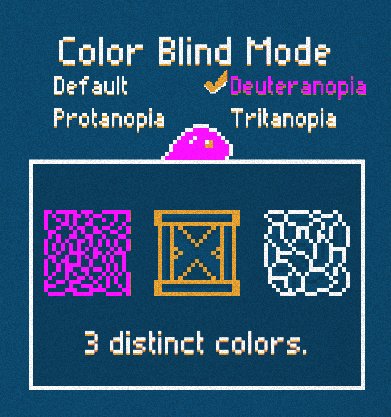 When you use colors for example, don't hard-code them, but use a database or references instead. This way you can easily swap a color-set for colorblind-friendly ones. Is the game voiced? Great! Just make sure to have subtitles or dialog boxes for deaf people. Can you remap the controls? That way you can make sure that everyone can adjust to their play style. Find the links at the end of the articles for more questions.

There are many more simple tweaks that help with accessibility and the more you think about them, the more you come up with.

Talk to the community

A very important part is that you're not doing everything "in the basement". Nobody knows more about accessibility than those who are in need of it. Find the communities and talk to the players, let them test your game and hear their feedback. They are full of great input and they want to create awareness about the topic and developers should too!

To spread awareness we are using the hashtag #GamingWithoutBarriers. Please support our cause by spreading the word about accessibility in games. We are also doing a charity event and are donating 10% of our sales to a charity organization for blind and visually impaired people, from Dec 13th to Dec 26th. You can read more about it here.

If you want to know more about Code 7, you can visit our website.
Episode 0 is available for free.