My name is Trevor Blom and I am the Technical Lead at Vertigo Games. I have been working here since 2011 through an internship and obtained my M.S. degree in Game & Media technology while transitioning into a full-time position.

My responsibility is to defend my programming team from crazy designers and artists by keeping our goals clear and achievable. Next to that I try to squeeze in as much programming time for myself as possible.

Our team is based in the Netherlands and we have been working on VR games since late 2012, the period when the Oculus Kickstarter was happening. We started working on our game called World of Diving which was a natural fit for VR, our creative director thought, because of the similarities between HMDs and scuba diving gear.

During this period, we got in close contact with Valve and Oculus and we created multiple small demos, including what would later become Arizona Sunshine and Skyworld. Since then we have grown towards full-time VR development.

We launched Arizona Sunshine in December 2016 and it has grown to be one of the more popular VR games. We have since then done a bunch of updates which included multiplayer content, and launched the PSVR port in June 2017. 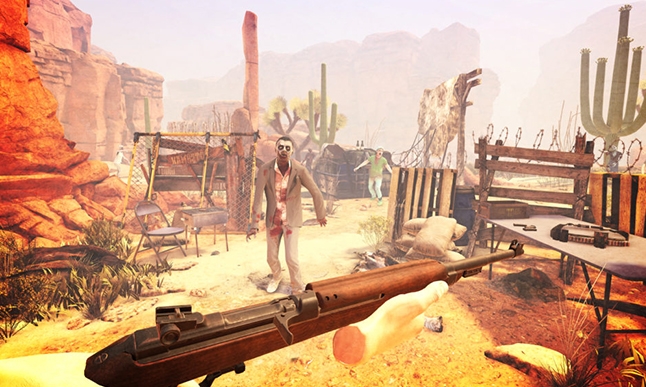 What: Integrating the PSVR Aim Controller in an existing game

The core mechanic in Arizona Sunshine is shooting zombies, so it is the most important thing for us to get absolutely right. Needless to say, we got really excited once we heard about the Aim controller and that the launch for this peripheral was close to our intended launch date of the Playstation port.

The Aim controller concept is simple, it is a two-handed gun peripheral which still supports the same buttons that can be found on the Dualshock controller. We had already explored the possibility of a two-handed gun in the PC version of the game but had to cancel that due to time constraints and the prototype state of these peripherals. However, we could definitely explore this chapter again now.

I will describe the solutions we have used to realize the shooting mechanic for Arizona Sunshine and how the Aim controller plays a big part in this. This will include design decisions, technical implementations and solutions to counter problems that arise when playing a 360° shooter in a front tracking VR play space. 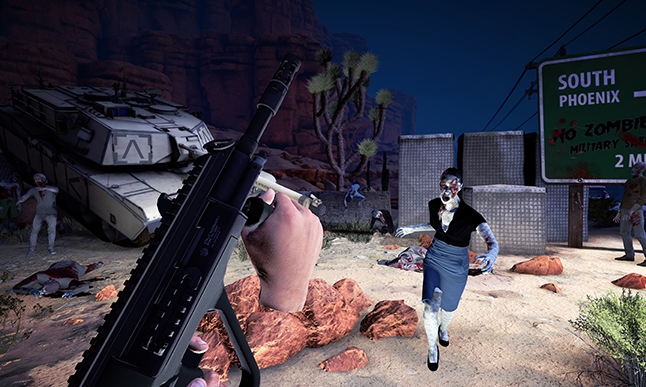 The quality and comfort of a VR experience depend on the immersion the developers can achieve and the characteristics of the VR system, for example the HMD resolution, frame rate, tracking quality and controls. All of these characteristics are a challenge on the PSVR system in comparison to their PC equivalents. Some challenges like maintaining frame rate are due to lower CPU and GPU processing power on PSVR versus a PC equivalent, and others such as tracking quality are related to the PSVR’s light based tracking. Each challenge requires that a solution be found to keep player frustration low.

Usually in VR with motion controllers, items that are equipped by a player are attached to their hands. The hands are then placed on the motion controller tracking locations. This introduces a small offset between the items and the controller. We counter this by positioning the trigger of the guns exactly on the trigger of the controller (this is different for each VR play space) and pose the hand around the gun. We have found that this results in a more accurate and comfortable aim for players. +1 to immersion!

In the PC version of Arizona, we have always been constrained to one handed guns, or large guns attached to a pivot (the sniper and machine gun). We couldn’t solve the problem of holding a two-handed gun by two single handed controllers in time. We had done some prototyping, but we were not happy with the results. 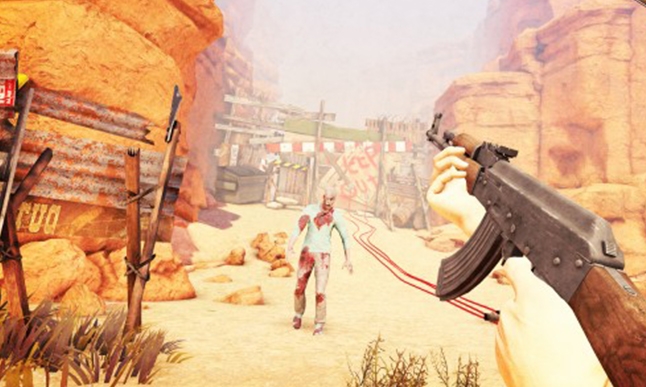 While it is technically possible, we were not happy with how it felt on every type of gun model in the game. The Aim controller, however, felt great and gave us ideal tracking for two handed guns. Around three weeks before the Arizona PSVR launch, we made the decision to create a version of the campaign in which you can play with two handed guns.

This mode kept the same design as the other controller options, however we did add a 3 shot burst to Aim controlled weapons to compensate for only having one gun. We also worked up until the last week tweaking gun configurations to make it feel really intuitive. Over the course of the Arizona development the guns have received multiple passes on realism and control comfort.

So, then the launch came, and we were excited to hear the reactions and feedback from the players. Other games that support the Aim controller had been launched as well so there was some comparison material. We received reports that the tracking in Arizona was reportedly worse than experienced in other games. This was a bit of a blow after working so hard on the port, and it required us to stay in crunch mode to investigate this and fix it.

However, we were determined to get to the bottom of the issue, and we did. A remnant from the PC version is that our displayed tracking in game is the exact tracking as we receive from the hardware without any smoothing. Any tracking inaccuracies caused by anything from the player’s setup to partial occlusion of the controllers are exactly reflected in the headset. We had become accustomed to Vive and Oculus tracking and accepted this as being an artifact of the PSVR system and had to adjust our design to it. 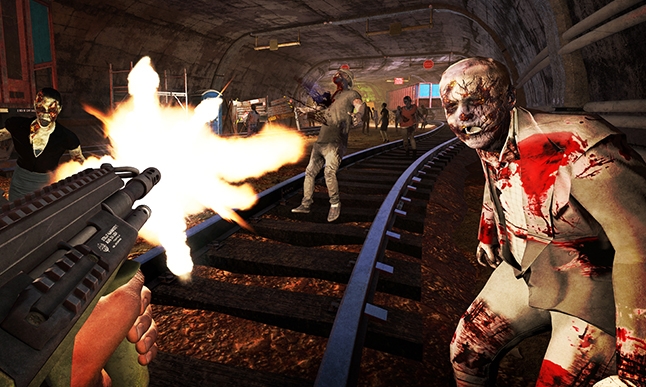 We learned that tracking performance could be improved by providing better feedback to the player from within the game. For example, when facing your back towards the tracking camera, your body will block the lights from being tracked by the system, and your controllers will start swaying in the game. On launch, the game used the design and control scheme developed for the Oculus non-roomscale setup.

However, the tracking angle experienced on PSVR is more narrow. We added a hint system in the first patch, similar to the chaperone systems on PC VR, that will guide the player to play in an optimal tracking setup at all times. This hint system displays a grid, or textual hints to make sure that the tracked devices of the player are always properly visible and tracked.

We have also added gun scopes to all the guns in the game in this first patch. Our goal with this is to counter the jittery tracking that can be experienced when aiming from the trackers directly as the proximity of the Aim controller with the HMD can cause tracking issues. The scopes contain a smoothed red dot sight and an offset to the controller, which makes aiming down the sights a lot more calm and comfortable. While not the original design, it became technically necessary to make sure that all players had the original experience intended, the ability to fire accurate headshots at zombies! 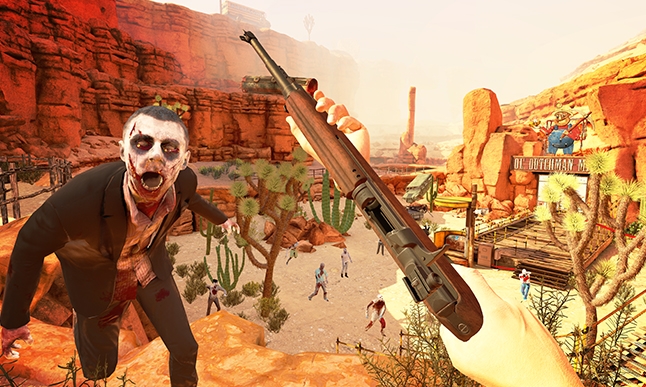 What we found is that there is no golden rule in the way VR games should be played — everyone is different and every HMD is different. Each tracking system varies in its tracking accuracy and angle. You have to account for the shift from room scale to forward facing tracking with some Oculus users, and then a shift to a narrower tracking angle with PSVR as one example.

That’s why we made sure you’re going to be armed with a bunch of settings that will enable you to tweak the VR controls to your liking. Go with your controller of choice, choose between teleporting or walking locomotion and smooth or segmented rotation, adjust controller-gun offsets, and use the left-handed setting if you are a lefty!