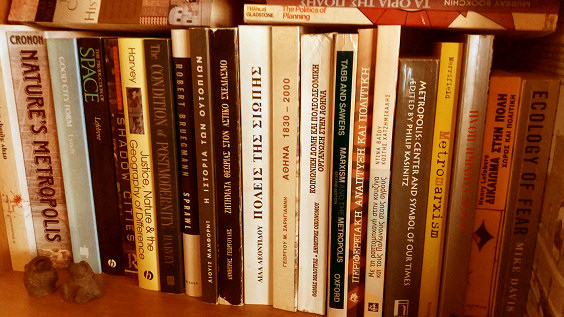 Despite what many seem to naively and inexplicably believe, designing a more or less fictional (and in equal measures functional) city is not an easy thing to do. Even less so when it's a city that will have to take a myriad of technical and cost constraints into consideration; a videogame city. Still, one has to start from some place and should one actually desire to come up with something believable and interesting, well, I do suggest one starts by reading through the five books I'm about to suggest.

A word of warning though: It would be wise to keep in mind that, what with cities being the incredibly complex and dynamic entities they are, five books could never be enough. Every imaginary urban place project I've worked on, for example, did indeed require quite a lot of fresh research and I've been studying cities since the late '90s.

On to the books:

The City In History by Lewis Mumford. 650 pages of exquisitely written history that go beyond merely presenting readers with the exciting story of urbanism from the neolithic to the modern era, and actually attempt to define the essence of the city. To identify its core and understand its function, while presenting readers with an amazing journey through human evolution, philosophy, architecture, planning, politics and art. If one ever hopes to truly understand any urban environment, one simply has to have read Mumford's classic, definitive work.

Good City Form by Kevin Lynch is, despite its narrower scope, another classic that has defined contemporary urban thought. It may not be as all encompassing and grand in its ambition, but it does focus on the visual aspects of the city and is thus crucial when it comes to the quite visual medium of videogames. Good City Form examines and reviews the physical forms of the city, its image, its planning, its design and its structure and is thus a very handy tool for every designer of places both imaginary and real.

Imaginary Cities by Darran Anderson. A recently released and unexpectedly excellent book that, you'll be happy to know, is not aimed at planners and/or architects. It's a book that effortlessly moves from Cavafy's barbarians and Wright's unrealized projects to revolutionary Hungary, post-revolutionary Russia and the wildest sci-fi urbanism, only to return to Bruno Taut, the pirate utopia of Libertatia and the mad Great War heroics of Gropius. A book that will definitely inspire and get you both thinking and imagining.

City of Quartz by Mike Davis. Often described as the work that predicted the Rodney King riots, the City of Quartz impressively does what it says on the cover: it excavates the future in Los Angeles by exploring an immensely intriguing and very existing contemporary dystopia and its brief but brutal history of breakneck evolution. What's more, the book manages to showcase just how complex, dynamic and vibrant every city is, while simultaneously telling a story involving Chandler, Brecht and some absolutely excellent jazz.

Key Concepts in Urban Studies by M. Gottdiener and Leslie Budd. Back when I was actively teaching people about cities, geography and planning this was the book I had used the most in order to provide students with a spherical knowledge of the field. It's a small, excellently researched and up to date work that swiftly covers an impressive variety of subjects from housing and gentrification to the models of urban growth and suburbanization.

[In the off chance you are fluent in Greek, I'd suggest you also read my PhD thesis. It's freely available online here and it will cover most of your metropolitan and theoretical needs.]