The game industry shipped a ton of great games in 2019; here are five! Two of them have at least a little to do with feelings, but three have cool guns, so hopefully it all evens out in the end.
Alex Wawro
Blogger
December 18, 2019

Alex Wawro is an editor at Gamasutra and generally a good sport about it.

Who will remember the year before 2020? The year before we embarked upon a new decade, a new generation of consoles, a new U.S. political regime and -- if the predictions of the classic 2011 film "Real Steel" are to be believed -- a new era of robot boxing?

Friends, I tell you now: we will.

The game industry shipped a ton of great games in 2019; here are five I managed to play that are worth looking at, if you haven't already. Remember them in the grim far future of 2020, when automatons battle for our amusement.

Few games put as much blind faith in people to be fundamentally good as Kind Words does, and somehow, it works.

It’s a big risk; players can write each other inane, insensitive, or just plain rude remarks in Kind Words’ letters, and I'm sure some do. But the lion’s share appear to take it seriously, at least so far, and it’s been wonderful to see a game foster a community of players who seem earnestly dedicated to helping each other feel better.

I hit a rough patch this summer; Kind Words launched not long after, and I used it to write a little letter bemoaning my troubles. Within a day I had half a dozen thoughtful, kind replies waiting for me. They really helped; even months later, I still sometimes fire the game up to rifle through them, and answer a few other players' letters while I'm at it. 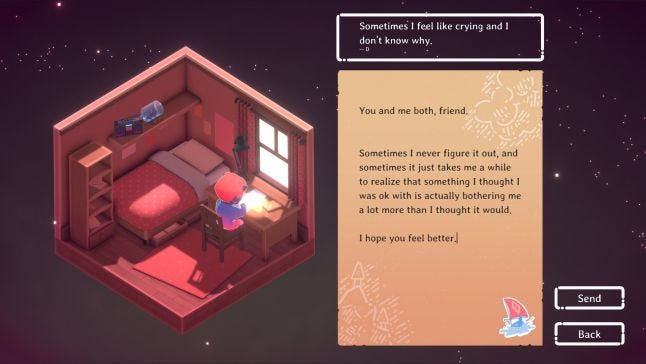 Because you have to, right? You don't have to be good, or right, but you have to let someone know you heard them. That's part of the unspoken agreement: this whole game of mutual support and encouragement only works as long as players are willing to log in and write nice things to each other, week after week, for nothing.

Games push us, constantly, to be better; better than the AI, better than the other players, better than our best run. Almost none of them push us to help each other. Kind Words does both, and for me, it worked. Here's hoping it keeps working for years to come.

People will tell you Kojima Productions’ debut game is a very expensive walking simulator, and those people are right, but also...no game I’ve ever played better evokes the thrill of crossing a stream. Of hopping from rock to rock and feeling a little jolt of joy, of pride at mastering the environment, your breath tight in your chest as you try not to think about slipping and soaking yourself in frigid water.

KojiPro designed a game to give you that thrill, and it got the guy from Boondock Saints to carry everything. Sure, the narrative is leaden and heavy-handed; ignore it. The world is a joy to traverse, in much the same way that I think the landscapes of games like American Truck Simulator are; there's something peaceful about picking up a load and hauling it somewhere, savoring the scenery along the way. 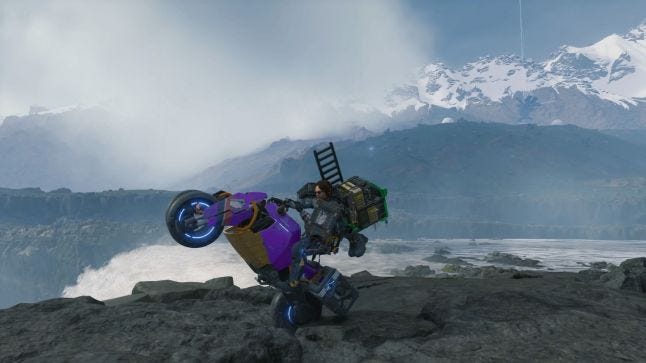 Most of the characters you'll find amid that greenery aren’t terribly interesting, but they’re almost all happy to see you, and I got a genuine warm fuzzy feeling from all the lip service this game pays to the importance of human connections.

And once you get past all the death imagery, Death Stranding is a remarkably murder-averse game; for lore reasons, death is extremely hazardous, so many an encounter with package thieves ends in the enemy or protagonist Sam "Porter" Bridges peacefully passed out in the grass, their cargo stolen. Even if you get caught and killed by an otherwordly monster ghost, Sam can sort of leisurely swim back into his body and rejoin the world of the living. Even though he's out there trudging the post-apocalyptic edge of a human civilization in deep decline, Sam never seems too shocked or stymied by what he's encountered; he just kinda...keeps going.

Nearly a decade ago I sat down behind two programmers in my first talk of the week at my first GDC. I didn’t know either of them (or anyone, really) but I could hear their conversation from two rows back; they were discussing physics calculations for virtual worlds, sharing advice on how to model gravity and light in a universe that, for the moment, existed only in their minds.

I barely understood any of it, but I was hooked; I saw two smart people building whole new worlds in their heads, and I couldn’t stop wondering at how they did it. Now, almost ten years later, Mobius Digital has managed to evoke that same sense of wonder with Outer Wilds, an entire solar system built just to titillate and satisfy your curiosity. 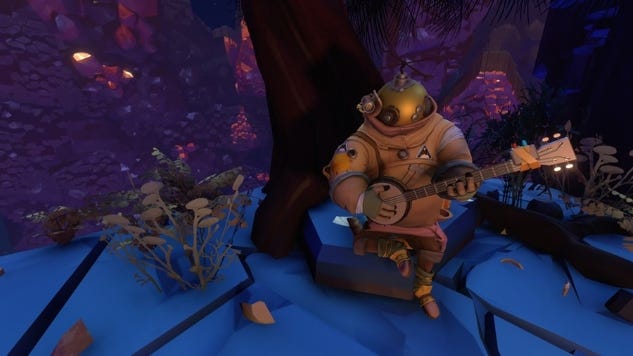 It’s hard to know what the real value of a list of games is, here at the thin end of this long decade; let it at least be a gentle reminder that video games can be beautiful toys, evokers of joy, and few were better at it this year than Outer Wilds.

It’s a charming orrery you can bounce around in over and over, each time learning a bit more about how it works and why it exists. It’s a playable universe, replete with stellar phenomena that inspire real primordial awe and terror. It’s a singular work of game design, and one of the most interesting releases this year.

Blue Manchu’s Void Bastards is a beautiful “one more run”ner, a game with a great core loop (scavenge derelict, often occupied spaceships for supplies) nested inside a stack of progression systems that can keep you playing for hours. 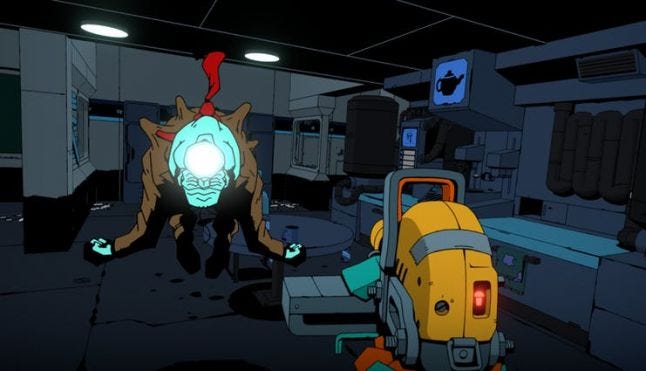 That Blue Manchu was able to make it pop with a colorful comic book aesthetic and a beautiful, biting wit is just icing on the Jaffa space-cakes. It’s never been harder to make a game that stands out, and Void Bastards’ success in an ever more crowded indie game market is something to celebrate.

PlayerUnknown’s Battlegrounds introduced the battle royale genre to my friends and I, but less than two years later it's been completely supplanted by Respawn's Apex Legends.

Cutting the squad size down to three, implementing a smart, context-sensitive pinging system, and filling out the roster with interesting, unique heroes all help Apex stand out in a rising sea of competition; it helps that the fundamental loop of moving, jumping, and shooting feels as satisfying as it did in Titanfall 2. 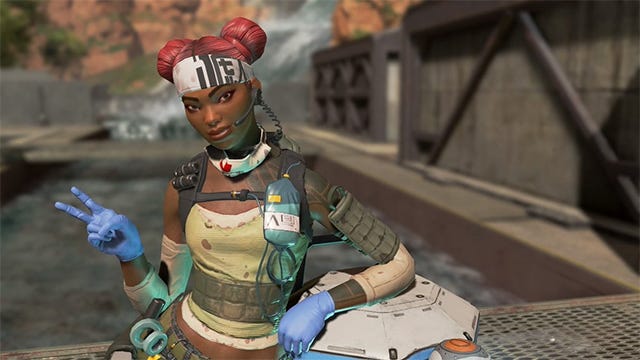 Respawn has a history of making great games, but it’s nice to see the studio rise to the challenge of keeping one supported, season after season, with interesting new modes and challenges. I’ve played more of this game than any other in 2019, with people I love to spend time with, and I can’t wait to see where it goes in the year ahead.