Gamasutra's UK news writer Chris Kerr shares his personal picks from 2015, featuring one game in particular that even he can't believe made the cut.
Chris Kerr
News Editor
December 18, 2015

End-of-year lists are a tricky beast -- we all know it’s nigh impossible to whittle a year’s worth of gaming down to a top five -- and as I came to write this year's annual round-up I was confronted with the surprising realization that, over the past 12 months, all of my favorite games were triple-A titles.

I’m talking about those blockbuster franchises that we sometimes love to joke about, and although you won’t find Call of Duty or FIFA 16 on my list, you will find one or two unabashed big-budget extravaganzas.

In my mind, each and every one of these games has earned the right to be here. I don't mean to suggest this was a poor year for indie game development -- far from it! Rather, I simply found that in 2015, lots of developers at big studios worked together to ship standout games that were massive, technically impressive, and surprisingly meaningful to me.

There are only two real certainties in life. The first? That Bethesda will release a game absolutely dripping in bugs, and the second? That we’ll all fall head over heels in love with it anyway.

Fallout 4 meets both of those expectations, but this year Bethesda made the curious choice to shake up its tried and tested formula, tightening up the shooting mechanics, putting a greater emphasis on action and narrative, and, in what was perhaps the biggest change of all, adding a deep crafting system that allows players to literally reshape the wasteland. 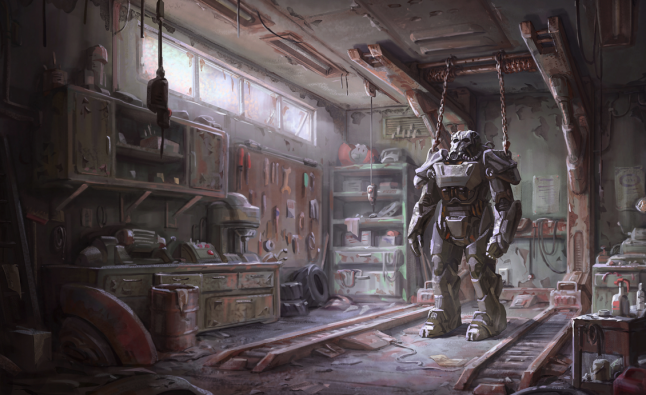 I know, it’s difficult to call any decision made by a developer as big as Bethesda “brave”, but after the success of Fallout 3 any changes ran the risk of alienating long-time fans and newcomers alike.

Instead, they slotted in seamlessly (although the main quest was lacking at times), and now I can’t imagine a Fallout game without them.

Whereas before I would’ve spent my time completing quests, but largely ignoring the intimate details of the world around me, now I can’t help but be drawn to each nook and cranny, like a true post-apocalyptic scavenger, searching for every desk fan, telephone, and used oil canister I can find to help me rebuild the Boston wastes in my own image.

Those new additions mean the world of Fallout is now richer than ever, and when you consider the level of depth present in Bethesda games from days gone by, that really is saying something.

I’m as surprised as you are that Guitar Hero Live is anywhere near this list. Yet, here we are, so it looks like I’ve got some explaining to do.

Aside from successfully reinventing the wheel by making some small-but-significant updates to the guitar in the form of six vertically aligned buttons, which allow for the incorporation of chords and other new combos, Guitar Hero Live’s biggest success is implementing a free-to-play model that isn’t absolutely diabolical.

In fact, it’s exactly the opposite, and was actually the reason I chose the game over Rock Band - although the idea of playing in front of reactive "live" crowds, which is a joy to behold, by the way, definitely helped. 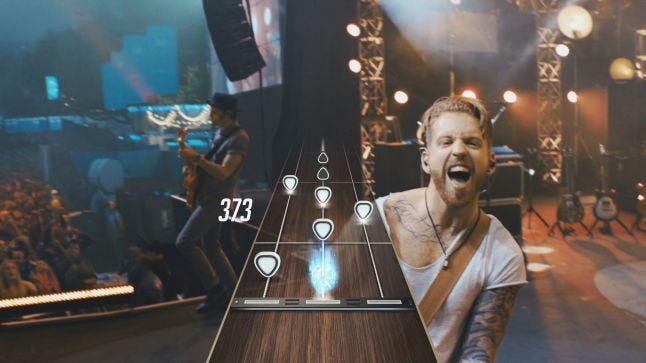 The freemium model cooked up by Activision is, and I can hardly believe I’m saying this, a masterstroke. Built into Live’s online component, Guitar Hero TV, it gives players the opportunity to spend a "play" to strum through one track from the game’s extensive, and constantly updated, online library.

On the surface it might seem like a cynical attempt to hold people to ransom, but in reality it’s a way of giving player’s access to a huge amount of content while sustaining engagement by challenging them to level up and earn even more credits.

On top of that, the series’ signature gameplay, which has definitely benefited from a much needed hiatus, is as preposterously fun as you remember, ensuring Guitar Hero Live marks a glorious return to form for a genre that seemed dead and buried five years ago.

Rise of the Tomb Raider by Crystal Dynamics

Having never played the first game in Crystal’s rebooted Tomb Raider series, I went into Rise without any expectations aside from an inkling that I might be about to boot up a good, if slightly pale imitation of Sony’s Uncharted.

I’ve got no shame in admitting I couldn’t have been more wrong.

The more I think about it, the more I realize that the only word I can really use to describe Rise is “compelling”.

I don’t know what it is, or how it happened, but I found myself unable to put the game down, and not because I wanted to see what the next twist in Lara’s tale would be. Quite the opposite, in fact. 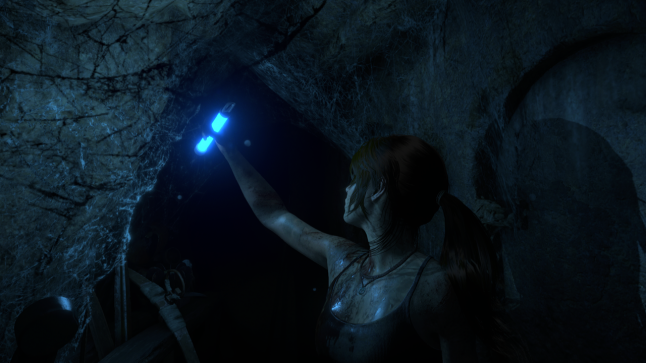 It wasn't the story that had me hooked, it was the world itself. Its hidden tombs and the puzzles within, the hunting quests, the crafting and foraging mechanics, and the upgrade system, slowly giving me the ability to explore even further, dig even deeper, and unlock even more of the world’s secrets.

The highest praise I can possibly pay Rise and the Crystal Dynamics team is by mentioning that, on some level, the game is strangely reminiscent of a Zelda title. Indeed, much like Nintendo’s famous franchise, Rise effortlessly balances exploration, action, and light RPG elements, and even manages to throw a half-decent story into the mix.

Truth be told, Rise isn’t a game I expected to enjoy half as much as I did. It isn’t even a game I expected to play this year (I imagined it’d quickly sink to the bottom of my pile and eventually be forgotten) but now that I have, I can finally see what all the fuss was about.

Despite the fact that Star Wars: Battlefront was slaughtered in some corners of the internet for talking up a $50 season pass before it’d even hit shelves, when the game did finally make its bow, one thing was clear: the designers at DICE had gone above and beyond to capture every drop of Star Wars magic.

From the iconic sound of blaster fire hurtling overhead, to the way Endor’s lush forests spark and burst into flames under the strain of a relentless Imperial assault, never before has a Star Wars game managed to feel so much like, well, Star Wars. 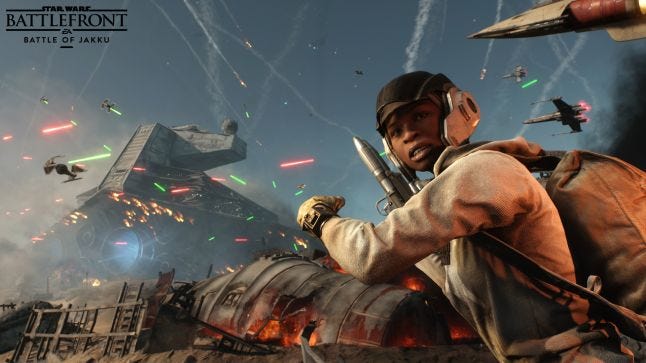 Really, that’s a testament to the work done by the visual and audio teams over at DICE HQ, who scoured the Lucasfilm archives in their quest to make a digital version of a galaxy far far away that's 100 percent authentic.

Sure, the game could use a few more (good) game modes and customization options, but when it comes to Battlefront I can’t help but think back of that age old saying, because sometimes, it really is the quality, not quantity, that’s important.

The Witcher 3 by CD Projekt Red

The Witcher 3 toyed with my expectations for a while, an ill-advised move that almost resulted in me shelving it for good earlier in the year.

I wasn’t expecting it to be such a slow-burner for the first few hours, although perhaps I should shoulder the blame for letting my own preconceptions take hold. 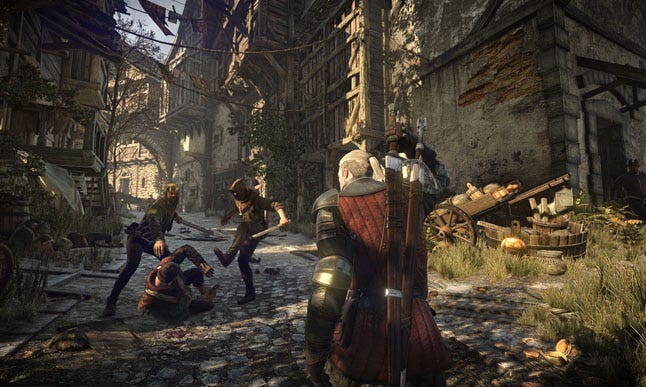 Fortunately I stuck with it, and after trudging through the opening chapter I was rewarded, like so many players, with an experience that redefined what fantasy RPGs can be.

Brimming with vast, sweeping vistas and locations that quickly become characters in their own right; a morally grey story that does away with the tired good vs. evil shtick that’s been beaten into the ground; and a truly unique combat system that captures Geralt’s pirouetting fluid combat style in a way you’d think was only possible in cutscenes, The Witcher 3 was, for me, one of the first games to show off what our next-gen rigs are truly capable of.