If I were to define my favorite games of 2015 as a whole, I would categorize them as a group of short stories--small individual tales that come together to make a bigger whole in different ways.
Game Developer
Staff
December 18, 2015

Bryant Francis is a contributor to Gamasutra

If I were to define my favorite games of 2015 as a whole, I would categorize them as a group of short stories--small individual tales that come together to make a bigger whole in different ways. Whether they’re part of a collection, a large anthology, or just a one-off you read in a magazine, my favorite games of 2015 did their best to strike you in small, specific ways, while still taking advantage of the gaming medium to teach players a little bit about the world and themselves.

Lifeline, on paper, exploded for a simple reason: it was the first narrative game truly compatible with Apple’s iWatch. But with only notification chimes and a lonely, sonorous score to set any kind of mood, it turned out to be a little bit more than that. 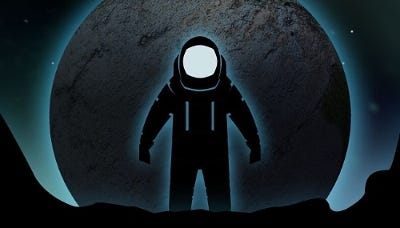 Lifeline isn’t just a text adventure, it’s was a text message adventure---a kind of short story told in a new digital format even with themes ripped from its analogue predecessors. The choice of pacing out the adventure by having its character, Taylor, carry out events in vaguely real-time, helps give players both the freedom to play a story wherever they wanted, and chronologically driven tension to leave them questioning their decisions for hours after.

3 Minute Games’ decision and freedom to approach Lifeline as an Apple Watch-focused challenge gave them a unique opportunity and breeding ground to create a narrative-driven mobile game unlike any we’ve seen yet, and as we enter 2016, it’s likely we’ll see begin to see many games that build their foundations on Lifeline’s clever design. 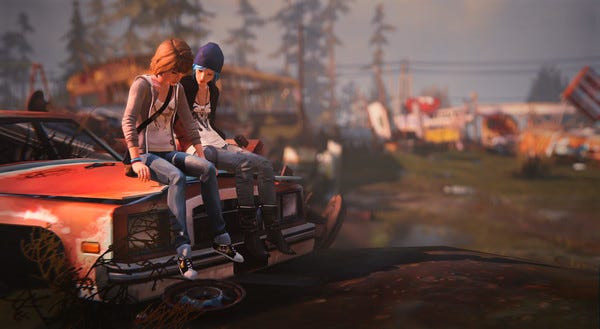 Life is Strange is a set of short stories with a somewhat chaotic ending. It’s a fantasy of what a teen hero like Max could do if she had the power to turn back time. She could save her friends, look smart and cool amongst her peers, and stand up to the clueless adults who have no understanding of their lives, but all the authority.

But as with all teenage tales of unlimited cosmic power, Life is Strange is interested in how things can go horribly wrong, and it successfully sets a series of consequences that show the limits of Max’s powers. Those limits work because they collide dangerously with a real-world evil so frighteningly close to home you wonder why video games need to reach for monsters with horns.

But for all the ups and downs of its writing, (and there are quite a few downs), Life is Strange finds its strongest beats in being this interactive diorama of a teenage life. It build spaces that provide a narrative reward for just sitting down and getting inside Max’s head as the camera cuts around the scene at play.

While the game’s science fiction sensibilities become more interested in how Max will choose to save the day, these banal moments where she is filled with anxiety, confusion, and hope are the culmination of a space earnestly interested in the voice of teenage girls, and give voice to a perspective seen too rarely in video game adventures. 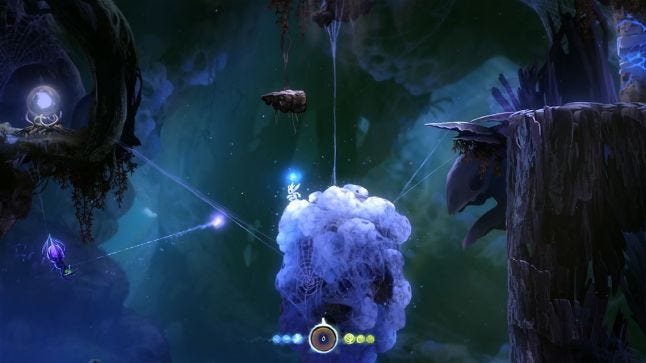 Ori and the Blind Forest is a specific kind of short story---a fairy tale---or a fable, or some other short parable about the loss of children and the price of growing up. The writing and pacing, along with some well-placed tragic moments to tug on the heartstrings, work enough broad strokes to pull the player in, but Ori’s story, told through bounces, jumps, and skin-of-the-teeth successes, is a triumphant success from the animators of Moon Studios.

These encounters, which will push the player to their limits or encourage them how to explore familiar a space with their new powers, only work thanks to finely tuned player animation that both communicates immediate dangers and encourages the player to experiment and string moves together.

It’s a climb up the difficulty curve that can be utterly painful at times, but it works well thanks to a cast of characters that can never be described as “good” or “evil,” just trying to protect their own. The result is a stellar game that asks for players to push themselves in ways they wouldn’t have thought possible---both in their physical skills, and in forgiving their enemies.

Tales from the Borderlands by Telltale Games 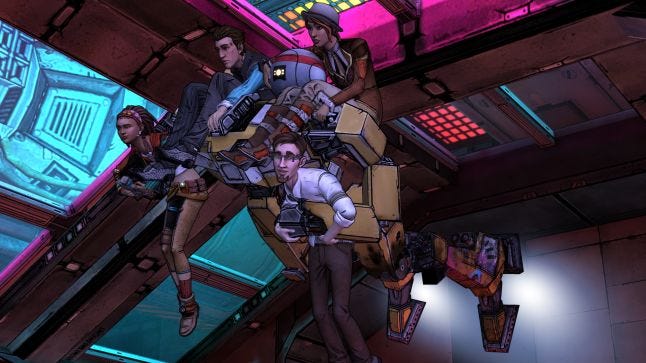 The Borderlands games, however wacky, zany, and offensive they can be at points, still aim high for big picture save-the-world narratives. Tales from the Borderlands, is a much, much smaller story, and for that, it’s undeniably the best adventure in the Borderlands series yet, even with about 95% less shooting.

Mechanically, Telltale’s only provided minor improvements on their choice-and-consequence formula, but from a writing perspective, they’ve finally turned that formula into an adventure that feels wild, earnest, and unpredictable. This best comes to light with fan-favorite robot characters Loaderbot and GORTYS, who plunge into the player’s life with both stupidity and sincerity and become the driving force behind a finale that screams about the awesomeness of friendship and helping the people you love.

For the first time in a few years, we have a Telltale game where the phrase “meaningful choices” doesn’t feel like the biggest and best way to describe what the game is accomplishing. Instead, it’s all about fist-pounds, colorful robots, and finding friendship with people you always expected to hate. And of all the short stories I played in 2015, this is definitely the one that left me cheering and screaming during its highest, most excellent points. 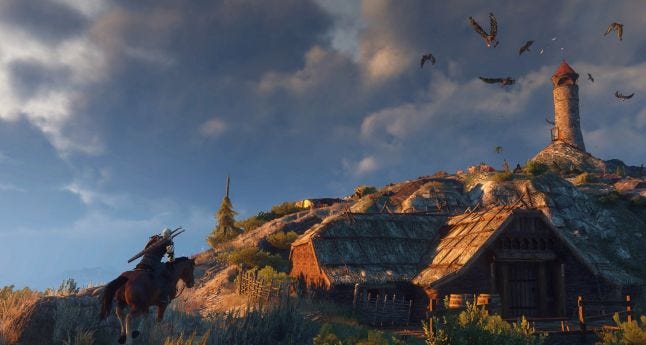 The Witcher 3 isn’t just a set of short stories. It’s a novel, packed with dozens and dozens of short stories around it. While one of Andrejz Saprowski’s books might focus on a central narrative with a few narrative deviations, The Witcher 3 is an open landscape for stories, where the fabled hero Geralt of Rivia can chase down the main plot or roam the countryside in the menial moments we might not see in other adaptations of this character.

The worlds of Skyrim or Fallout might contain some of these ‘games as a platform’ moments, but they’re mostly constructed through environmental clues and left-behind-notes. The Witcher 3 gives the player a chance to become invested in these disconnected threads through dialogue and choice. They can snark, they can ask for more pay, then can offer unneeded advice, or they can just take the job, and become wrapped up in the complicated lives of the people of the Witcher universe.

This isn’t a knock against the game’s main quest---though I confess I found the constant “you just missed her” of Ciri’s presence in the plot a tad grating after long complicated diversions like the city of Novigrad. But ultimately when I think of my time with The Witcher 3, I think of all the fascinating and unsettling moments that happened when I stepped off the beaten path. Whether it was the final encounter with the Women of the Wood or interviewing witnesses in a murder investigation, The Witcher 3 is most alive when it was flipping through the many stories of Geralt’s life---not the ones that put him against the darkest forces of the Universe.