Taking a look at the shmup's earliest integration of having to go out of one's way in order to trick that evil AI. And yes, I discuss why the first game to do so isn't Space Invaders.
Michael Molinari
Blogger
March 11, 2009 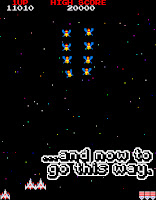 There comes a time in every gameplay type's lifespan (usually occurring in its days of infancy, namely during the golden age of gaming) wherein key choices by the developers - oftentimes "happy accidents" - result in a gameplay mechanic that forever becomes a staple of every proceeding offering in that category.

Since these types of behaviors are taken for granted and are as much a part of our lives as the stale taste of mushrooms is to Mario's mustache - especially in our seventh generation of games - I'm having trouble giving examples other than the one I'm about to discuss, that being the "fake out" in Galaga.

First, allow me to define the "fake out." This is a simple maneuver involving you, the player, to position yourself strategically on the screen such that the enemies' AI will think that's your chosen destination in which to chill for a while.

Suddenly, you move in the opposite direction of your false dwelling, making for advantageous odds in your favor, whether they be for points, a power-up, having less to deal with, or simply to survive.

I speak of the "fake out" so fondly because it's a very important ingredient of our shmup lives. I've found that the very first implementation of its usage (and necessity) was in Galaga, released in 1981.

Space Invaders may have come first, but all shots fired by the aliens were random (or at least unrelated to how awkwardly you hid behind your own bases in fear of losing too early in front of your friends).

Galaxian may have come earlier, but its attack formations were too cosiney, allowing for easy escape. And for those toting the Xevious love, that didn't come along until the following year, so credit goes to Galaga. That was the first shmup that required you to perform the coveted "fake out" in order to survive. 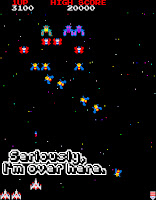 The setup is rather simple: A legion of enemies on the left side of the formation are just itching to dive in succession after your precious, quarter-starved bounty.

You start to move towards the left, making it seem as if you're playing the safe route, surfing inside their tunnel of pain. They immediately change course, aiming right for your cockpit, both bullets and enemy ships glaring towards you.

Suddenly, and without much reasoning, you dart towards the right - the very place they used to be going, but simply can't go to anymore (not because they spent time, money, and energy making on-the-spot changes in ship formations and coordination, but because they were programmed to stop following you once they've already plotted their course) - thusly rendering you safe, without worry of bullets, enemies, or even the dreaded forced-abduction with no lives left.

Here's a little taste of the subtlety that is the fake out. Note the subliminal one at 0:36. Just beautiful.
[YouTube link here]

Oh, and on a side note: Awesome a bit?