Freedom through constraints: The design of Michael Brough's Imbroglio

From the 7X7 grid of Corrypt and the 6X6 of 868-HACK, Michael Brough's play spaces have continually shrunk. His new game Imbroglio is even more constrained: a 4X4 grid. Constraints can be freeing.
Game Developer
Staff
May 24, 2016

Developers often tend toward 'bigger' as they create new games. Sequels must be larger than the last. The next game must have more stages. More expansive maps. The play space is always growing.

From the 7X7 grid of Corrypt and the 6X6 grid of 868-HACK, his play spaces have continually shrunk. His latest release, the well-received iOS deck building roguelike, Imbroglio is even more constrained, with a 4X4 grid size. ("I first prototyped it at 5x5 but that was way too big," he writes on his blog.)

Contained within that tiny grid is the essence of an epic RPG, with artwork and gameplay carefully distilled to maximize the minimalist playfield.

Brough cuts away unnecessary elements to get to the essential bits where the player's actions matter. "While bigger spaces are fun to explore, at any given moment, you're only interacting with your immediate surroundings, he says. "By cutting out the rest of the map and zooming in on one room, you get to focus more on the details of those interactions."

For Brough, the constraints of the small grid were liberating."It feels quite freeing to start making something so small and then realise how much space you still have," he says. "This shouldn't be so surprising--chess is 8x8 and has fascinated people for centuries. But somehow in videogames, the tendency has always been to go bigger and bigger, just because you can, rather than to look closer." 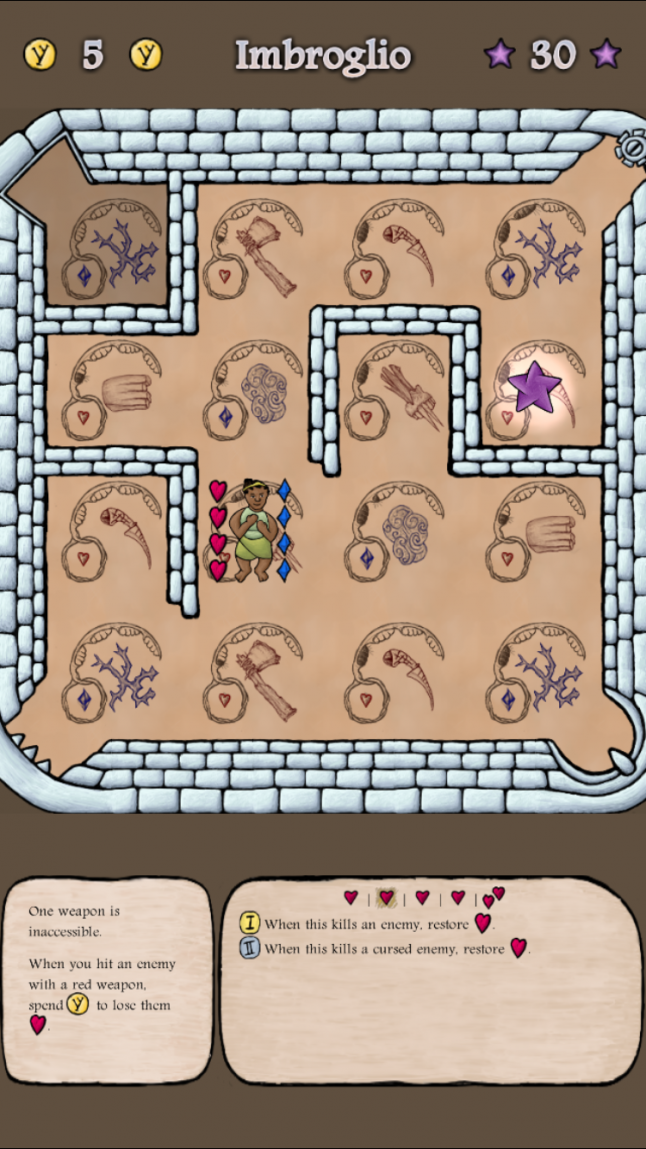 Brough has been gratified to see the reviews of Imbroglio, and not because they're gushing. "If you're having trouble figuring out the game, read one of these folk doing a way better job of explaining it than i do," he tweets.

He takes his best crack at summarizing the game for us. "Imbroglio is a small-scale arena tactics game where every tile has a different weapon in it," he says.

"If you fight while standing on a tile, you use its weapon, so positioning matters a lot. Then as each weapon drinks the blood of your enemies, it grows more powerful."

"Waves of monsters come in through gates at the corners of the pit and you're trying to survive fighting them while collecting healing gems for a high score," he adds. "The weapon layout is customizable, so you can build combos. In a way, that feels a bit like the deck-building of Magic: the Gathering or Netrunner."

There is a dense amount of strategy and planning involved in setting up the tiny gamespace. Each space has to be placed by the player, and all of these have to work well in tandem with each other and the enemy movement.

Managing weapons, tiles, combos, and monster movement creates complex play, but Brough wasn't done adding strategy to his limited space yet. "When I first had the idea of weapons on tiles, one of the weapons I had was one that gets stronger as it kills enemies," he says. "As I played with the design, I thought, 'What if that's the general rule rather than just one card type?' That opened up a sense of overall progression that had been missing when you could have all your weapons fully in play already from the start."

With that, he had squeezed the key aspects of an RPG into the 4x4 grid, creating player progression and strategy within the confines of the space he had given himself. "It started to feel something like the kind of RPG character arc where you start as a level 1 weakling and eventually fight demigods." says Brough. 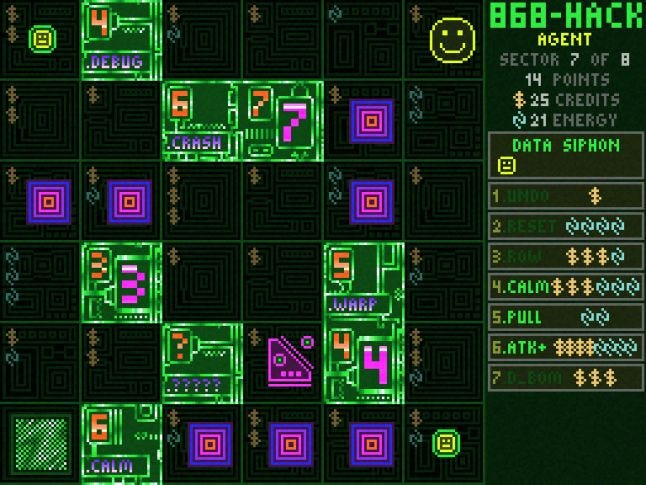 Brough's earlier game 868-HACK had a 6x6 grid, which seems expansive in retrospect.

The 4X4 grid also helped Brough refine what he wanted to do with the game, giving him ideas on how to add complexity as well as better harness ideas he already had, such as his weapon leveling system. "The number 4 was already becoming important--4x4 grid, 4 enemy types corresponding to the 4 corners," he says. "So I went with 4 kills to level, 4 levels to gain, and that seemed about right; it feels significant to level something up, but it's still accessible if you focus on it."

"I tried some different numbers, even just one kill per level, but it felt inconsequential to level things up quickly," he adds. "It needed a certain amount of time to give your actions weight. From those numbers - 4x4 tiles each taking 4x4 kills to level - you get that it takes 4^4 = 256 enemies to complete your board."

"Each game has different needs. Sometimes the atmosphere is most important, and other times the priority is to be able to see what's going on. Imbroglio needs to pack a lot of information on screen, and so a high-res style makes sense."

This limit also made some aspects of the game far easier to communicate, as it has for other games he has created. "With 868-HACK, I had the idea of 'siphoning' map tiles for abilities and resources, and that imposed a practical limit on map size," he says.

"If every tile is carrying that much information -- offering choices about scoring and character advancement as well as combat tactics -- it's infeasible to communicate that for a thousand tiles on screen. Then, with Imbroglio, I had even more information per tile -- damage number and type, experience bar, extra abilities -- so it had to be even smaller."

This also prompted the game's spare yet nuanced art style, which had to easily communicate to the player within the space he had.

"With every game, I am trying to work out what makes most sense for it. Each game has different needs -- sometimes the atmosphere is most important and I am trying to give a sense of place, sometimes you might obscure things for a reason, and other times the priority is to be able to see what's going on." says Brough. "Imbroglio needs to pack a lot of information on screen, and so a high-res style made sense."

The grid size formed a symbiotic relationship with the game over the course of development, enhancing Brough's ideas in some places while helping him come up with new solutions to the challenge of progression and depth in a limited space. 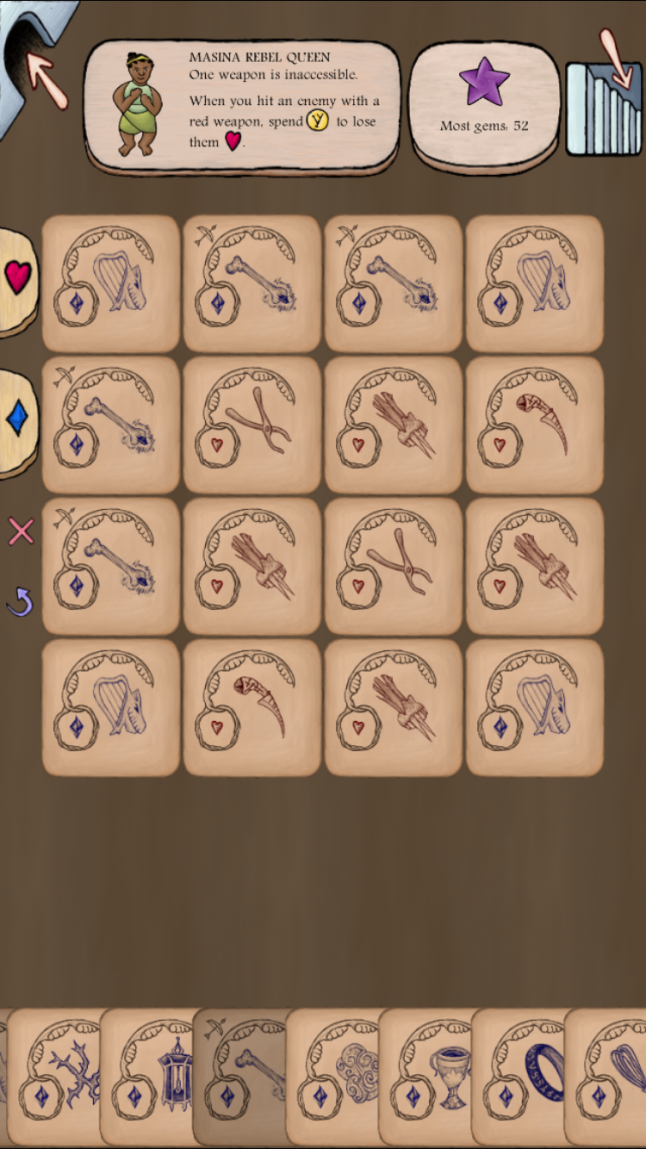 Brough insists that tight play spaces were the natural and logical choice for his designs. "It would be harder to make them bigger," he says.

"I used to think about, 'What would a 5x5 or 4x4 roguelike look like?' as a challenge, but when making Imbroglio, dropping it down to 5x5 then 4x4 simply solved a bunch of problems without adding any new ones."

"Now, I think about 3x3 as a challenge," he adds. "But if I ever make one, it will probably be because it was the easiest size for something to be."

No matter how big the game world is, their actions are intimate and close. What they will do in the play space a developer has created for them will happen in the immediate space around them, whether it be a short puzzle or a sprawling space opera.

Brough has looked at that relationship between the player and game and closed the distance, putting all of his focus onto the player's interactions.

Through this zoomed-in perspective, Brough found  solutions to problems he had in development, helped add clarity to player strategy, and distilled the heart of an epic strategy RPG into a 16 square grid.

"Imbroglio arose fairly organically, just feeling out what worked given the basic idea to start with, but with an open mind for strange possibilities," he says. "In the end, it feels quite contradictory -- a long leveling arc inside a tiny space. But it works as a game, and I hope the perversity adds a pleasant tension."