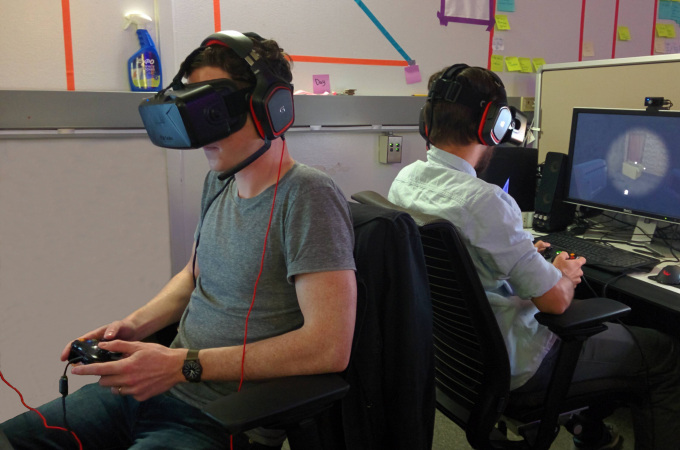 At the beginning of 2016, we set out to explore a realm of game design we hadn't seen done before - disjoint, 2-player puzzles in VR. In our game Shackle, players find themselves back to back in a haunted room, divided by darkness. Seeing opposite halves of the room, they must coordinate actions while maintaining a low profile in order to escape, or face certain doom. 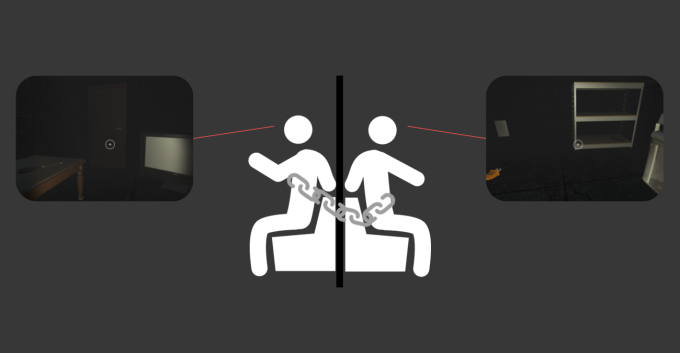 Players rely on one another to see and interact with what's behind them.

When development began, we found ourselves designing in darkness - while there are plenty of puzzle, horror, and cooperative games to research, we had trouble finding any with the same constraints. The closest we found was the popular Keep Talking and Nobody Explodes, which uses a single VR headset to "blindfold" the players from one another. While this certainly gave us a frame of reference, there was no denying that we were going to have to dive head-first into the abyss, and start developing designs we thought would work. After putting our vertical slice in front of fresh eyes, we quickly began to learn what was working - and what wasn’t.

To put these ideas into context, let's take a look at them in reference to a simple puzzle - unlocking a combination lock. Players (let's call them Jerry and George) must do the following to complete this task:

1.) Jerry must notice a torn map with an incomplete sequence of numbers on it.

2.) George must open a desk drawer to find a shred of the map with the rest of the numbers on it.

3.) Jerry and George must piece together the entire sequence, and use it as the code to unlock the lock.

Here's the rules that helped us make this dynamic feel natural:

With just 5 weeks left until release we're doing our best to continue learning and polishing our experience. If you're interested in updates on the project, or just supporting our crazy endeavor, give us a follow!