SEARCH
A minimum of 3 characters are required to be typed in the search bar in order to perform a search.
Design
10 min read
Blogs

Open world games have become some of the biggest money makers in the industry. But the high cost of development can make them a risky venture thanks to several important design consideration that can make or break them.
Josh Bycer
Blogger
January 08, 2013

Open world games have become some of the biggest money makers in the industry. But the high cost of development can make them a risky venture thanks to several important design consideration that can make or break them.

Since Grand Theft Auto 3 came on to the scene over a decade ago, game makers have been trying to outdo each other with coming up with open worlds to explore. The open world genre is one of the most demanding genres to create, where the game space is just as important as what the player is doing in it.

From Arkham City, to Mars and several interpretations of New York City, the open world genre is full of multiple interactions and gameplay systems. The genre has really exploded over the last few years as different designers have been figuring out the elements that work and don't work within the genre.

Let's begin by dispelling a common myth about the open world genre: they are not sandbox games. After the release of Grand Theft Auto 3, many people referred to it and games of the genre as sandbox games, due to the freedom and scope of the world. However, these titles no matter how open the game space, are not a part of the sandbox genre.

Sandbox games are those where there isn't a set way to play the game. The player is given the freedom to do whatever they want using the tools and items available to them. These games may or may not have progression, but there is never a point where the player can say that they "beat the game."

Some examples would be SimCity, The Sims, Mine craft and Terraria. The player can play these games for as long or as short as they want, while playing towards either minor goals the game presents, or personal goals.

Another example of what is not a sandbox game: are titles where the player has the freedom to decide how to complete goals. Games like Spacechem, Banjo and Kazooie: Nuts and Bolts or campaigns in city builders.

In these games, the player is given an overarching goal for a level, and then the player is free to figure out the solution from the available tools. Even though the player has the freedom to work with the tools available like in a Sandbox game, they are still working towards arbitrary goals set by the designer.

When it comes to open world titles, the first thing any designer has to understand, is that there are two types of actions available to the player. We'll define these as "fine" and "gross" for this post. Gross actions are those designed with the purpose of the player moving around the game space and are used more often. While fine actions are those for interacting with the world or other characters and occur less often.

An example of a gross action would be the player making use of the grappling hook and parachute from Just Cause 2 to get around. While a fine action example would be fighting thugs in Batman Arkham City.

One of the biggest challenges when creating an open world game is balancing out the design of both fine and gross actions. This is due to the fact that the player will be constantly switching between the two based on the situation at hand, and any cumbersome design or mechanic is going to be noticed right away. 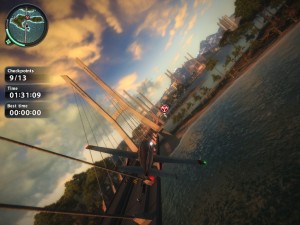 Just Cause 2 allows the player to switch between moving, shooting, gliding, flying and driving at the drop of a hat.

In a normal game, the player will only have one available set of actions to use and understand while playing. But open world titles demand that extra system due to the size of the game space.

Because the main point of an open world game is exploring said world, gross actions are usually given top priority.

But by doing that, it makes the fine actions appear cumbersome and less rewarding. If you ever played an open world game like the first Prototype or Crackdown, and had a hard time targeting enemies with melee attacks, you know what I'm talking about.

Only a few of the open world games released have well defined mechanics in both groups. The Assassin's Creed series gives the player a move set for combat, getting around and performing stealth actions. Another example would be from Batman Arkham City where the player can glide and grapple around the game space, use gadgets to solve puzzles and fight crowds of enemies.

How well the different mechanics are utilized depends on how quickly and easily the player can transition between the different groups. And one of the best IPs that made use of this was some of the Spiderman open world titles.

The agility of Spiderman was translated into the game by allowing the player to switch between fine and gross actions easily : Swing into a crowd of enemies, web zip up out of the way and then come back down to finish them off in the span of a few seconds before swinging away. One example that worked well using this concept was Spiderman Web of Shadows

Speaking of movement, it is one of the most polarizing details of an open world game and can make or break it for some.

The Matters of Movement:

Moving around in an open world is one of the most important details to consider when designing, as it represents the majority of the actions by the player.

The big distinction when it comes to movement in open world games, is the setting itself. Exploring a fictional setting gives the designer more leeway in designing movement systems compared to a grounded world.

Regardless of the setting, movement is considered the top of the gross actions and a major point of any open world title. There are far more examples of open world titles with poor or boring movement, then there are great.

The trick is that moving around the world has to be engaging enough so that the player doesn't go on auto pilot while playing, but simple enough that it doesn't get in the way of the other actions. The environment design also plays an important part which I'll get to why in a minute. I've come up with a simple way to gauge how interesting movement is: "the straight line test."

Basically, the longer the player moves in a straight line, the more lackluster the movement system is. We can see this in grounded titles like Red Dead Redemption where the player is just riding their horse for long stretches of time. But this can happen even in games based around super human abilities. 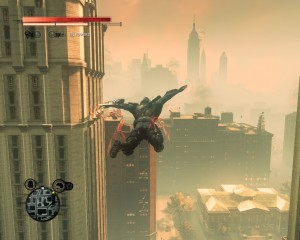 While Prototype 2 does eventually let the player climb up skyscrapers. By then their jumping and gliding ability will supersede any challenge.

In Crackdown, all the buildings already dwarfed the player from the beginning, and got higher and higher as the player progressed. But in Prototype 2, the building sizes stay largely the same until the very end.

What ends up happening is that in Crackdown, even though the player is progressively jumping higher, they still have to maneuver around and climb buildings. But in Prototype 2, the player can just hold forward, jump and glide in one direction until they reach their goal.

The Assassin's Creed series also has great movement even though it is a grounded design. Thanks to how agile the player is with the ability to grab almost any edge and maneuver across roof tops.

Now, grounded games do have a way to break the straight line test, and that is with the use of aerial vehicles.

The use of aircraft can give the player freedom in exploring the world and can be set up with separate challenges and abilities to further test the player. It's important however not to downplay ground movement in favor of aerial, as what ends up happening is that players will disregard all ground options of transportation in favor of going airborne.

If the movement system is engaging enough, it helps to enrich the act of exploring the world. The bonus is that the designer can create movement challenges or mini games to further challenge and award the player.

Lastly, besides fighting, driving and exploring, the designer can also fill the world with items for the player to find. Placing random doodads seems like the easiest of the three points of this post to get right. However, making collectibles interesting is usually what separates a good open world title from an amazing one.

Collectibles can take many forms but there are three consistent points that determine a good system from a bad one.

One of the best examples of good collectible design would have to be Crackdown for the 360. In the game, the player is on the hunt for agility orbs: green floating items that can be found throughout the world.

The orbs emit a faint humming noise whenever the player is close to one, giving them an idea of where to look. Each orb the player picks up will slightly increase their max jumping height while giving them experience to their agility category. When the player has enough experience to level up agility, they'll not only jump higher, but run faster too.

As you can see, the orbs hit every point and are worth it for the player to find. As a contrast, in Assassin's Creed 2, the player can pick up feathers. The feathers are hard to spot when the player is running around and give the player a small increase to their villa value. This raises the amount of money the player gets every few minutes.

The problem with Assassin's Creed 2 is that money loses its meaning the longer you play and eventually there will be no reason to find feathers other than for going for 100% completion. And by making them harder to spot, means the player is less likely to drop what they're doing and go after them. 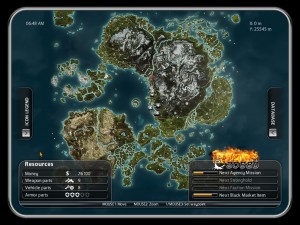 The Just Cause 2 world is full of challenges and collectibles to uncover. Providing a reason to explore both for gameplay purposes and completeness.

The use of building collectibles towards completion can work if it is tied to the main gameplay. In Just Cause 2, every collectible the player finds adds to their chaos rating: this unlocks new missions and items for the player to buy.

While in Batman Arkham City, a lot of the collectibles are designed as mini puzzles in the environment for the player to solve. And they are tied to the Riddler challenge story arc.

The open world genre is one of the few genres that directly benefits from improvements in technology. Better engines mean bigger and more expansive worlds to explore. With the next generation of consoles coming up soon and the announcement of Grand Theft Auto 5, it will be interesting to see how things develop over the next few years.