Facebook and social game designers have been trying to attract hardcore gamers back to the platform, but is this actually viable or are designers barking up the wrong tree?
Josh Bycer
Blogger
June 24, 2013

Facebook and social game designers have been trying to attract hardcore gamers back to the platform, but is this actually viable or are designers barking up the wrong tree?

Reprinted From My Site: Game-Wisdom

Over the last year, part of Facebook's plans going forward to retain and gain users to the site was revealed. This involved attempting to attract hardcore gamers with new, more involving games.

Facebook's track record so far has been poor with titles like Insomniac’s Outernauts, the Dragon Age social game and the numerous games from Zynga. And given what we know about social game design and their competition with free to play games, I'm not exactly holding my breath to be sucked into Facebook anytime soon.

Social games are not designed the same way as other titles. The main goal inherient by their basic design is not about attracting fans, but taking money -- From limiting mechanics to constant micro transactions and bugging your friends to help you.

These mechanics are so prevalent that there are conventions and presentations aimed specifically at ways to get more money out of your social game audience.  The design of taking money instead of providing gameplay has created a stigma against social games among the hardcore.

The first thing that any social game aimed at hardcore gamers would have to be "trimming the fat" regarding all the social mechanics aimed at maximizing profit over play. No limiting mechanics, no reason to bug people and no constant transactions.

In other words: remove the "social" aspects made famous by the social genre. The reason is that hardcore gamers are more attuned to game mechanics than social gamers and will pick apart any game that emphasize spending money over playing.

If someone wants to play a game without spending one cent, or playing with anyone else, then the game should not in any way hinder them.

Free to Play design has gained major traction over recent years. From smaller developers releasing their own games, to the MMO transition to the market, we have seen a number of well thought out, polished and original games released.

But with the social game scene, any growth of the genre has been stymied by companies trying to outdo each other in -- who can get the most money out of their customers first? When one social game reached a point of popularity, you can just bet that other companies will attempt to "borrow" some of the elements for their game.

Now, if Facebook designers are serious about attracting hardcore gamers to the platform, this should in theory cut down on the number of copycats. One, because the more complex the game is, the harder it would be for someone to replicate fully. And second, hardcore gamers have a greater sense of brand loyalty and would call out anyone who tried to outright copy their preferred game.

There is one big advantage and disadvantage that the Facebook platform has over Free to Play games. The advantage is the accessibility. You can access Facebook from any number of sources and can play a game as easy as 1, 2, 3. To play a free to play game, you need to sign up, make sure the game is installed, and you can't play it anywhere compared to a Facebook game. 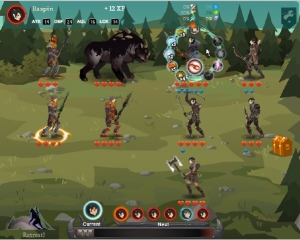 Dragon Age Legends was one of the first Facebook titles to have more advanced gameplay. But that wasn't enough to convince gamers to spend money

With that said, Facebook has the problem of being a set platform.  What that means is that someone who wants to design a game for it, is limited by the technical limitations of Facebook.

Free to Play titles are designed using their own software and client and are only limited by the time and money needed to develop it and not by the limitations of a secondary platform like Facebook.

Titles like Path of Exile and League of Legends may not have the graphical fidelity of Call of Duty, but have their own art style and look good nonetheless.  More importantly, they visually stand out from each other and are aimed at different markets of hardcore gamers.

That last sentence is the big hurdle for anyone attempting to make a hardcore social game: Creating a specific fan-base. When we look at social games today, they are aimed to be as accessible and far-reaching as possible. This by itself is not a bad thing, but hardcore gamers want specific designs. Someone who likes MOBA styled games is not going to play Path of Exile for example.

Simply put, a hardcore game is by and large aimed at niche audiences who appreciate the unique gameplay. Not something so simple that everyone and their grandparents can play. Both social game designers and Facebook would have to get used to not having games that earn vast profits or a huge number of fans quickly.

The goal to grow the Facebook game scene is a long difficult road ahead. Free to play game design has gotten such a head start, that they may not be able to catch up. The million dollar question is: Just how hardcore would the most hardcore social game actually be?

Even if developers do go outside the social game box to develop new games, would they be able to compete with the growing Free to Play market? If they're not careful they may show up for a race with the most superior horse and buggy... to face a sports car.