What is engagement? To me it’s just someone paying attention to the game and not wanting to do something else either in the game or outside of the game. Basically it’s contentment with the interaction they’re experiencing. So what is a ritual? To me a ritual is just a specific set of actions that are taken in a certain order for a certain result.

This subject touches a lot on abstraction in games or how similar game actions are to real life actions. I actually wrote a whole article about mechanics that skew towards real life, which I call diegetic mechanics, and you can read about it on Gamasutra here.

The method of engagement that this article talks about is an expansion of this idea.

What Can Be Gained?

I’ve wanted to make a video or an article about this subject for a long time. The issue was that I didn’t really know why I liked these kind of actions, why that kind of experience was good for a game, or why anyone would ever want to deal with the mundane elements of life in a virtual world where they can all be skipped.

After thinking about this off an on for months and having a conversation with a indie developer friend of mine I figured it out. I concluded that these things are engaging not because of the actions you’re taking themselves but because they promote a mindset and behavior that makes the other actions, conversations, stories, and choices of a game far more compelling. Or put more directly, they make you act in a way that maximizes the enjoyment of the game.

So they’re a device to make the player do what the game designer wants. Just like putting a light in an otherwise dark room, or having a character yell through a radio to “Press the 'A' button! Press it!” But these forms of player direction are entirely external. What I think makes ritualistic actions in games so powerful is that it changes how the player thinks by making or letting them reflect while also acting.

So Let’s Dive Into Some Examples

Jalopy is game about a road trip with a junky, little car that needs constant care. This game makes you do everything bit by bit, pick up the gas can, open the hood, open the cap, pour in the gas, close the cap, close the hood, take the gas can back to the trunk. Now you have gas. Yay. 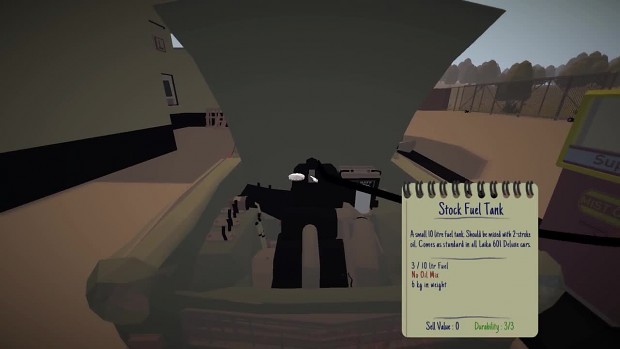 Compare that to a racing game. You have infinite gas in a racing game. Stopping for a pit crew would stop the action and it’s just a bunch of pixels anyway so they skip that step. They just let you race.

Would stopping for a pit crew make you play racing games differently? Of course. You’d need to think about your fuel usage and not only how fast you’re going. You would need to strategically get your tires switched to get more traction at critical parts of a race. It makes you think about the game differently.

Red Dead Redemption 2 is a game about being an outlaw in the old west. You have an outlaw crew and they live in a camp. This game lets you run around, rob people, kill everything, go shopping, have a shave, clean your weapons, and upgrade things. 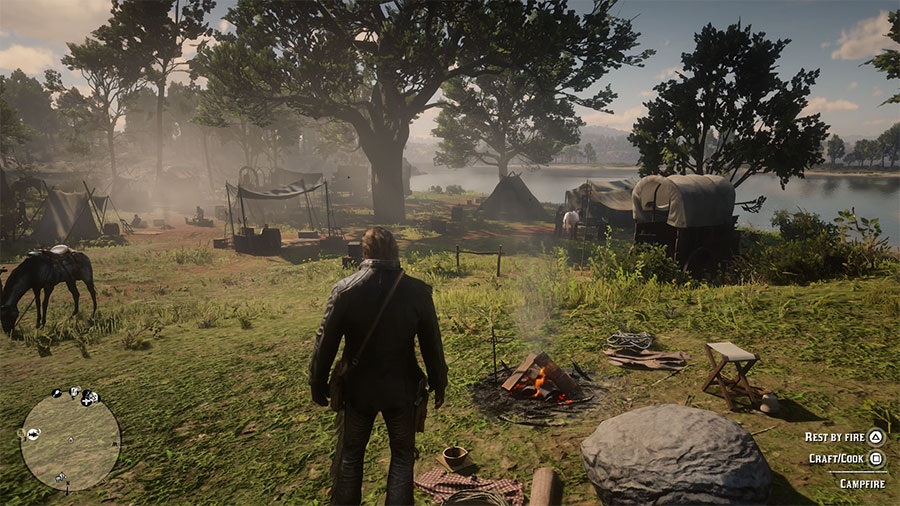 The part I’m most interested in is that you cannot run in the camp. Normally you can sprint and jump around like a jackass, but once you’re in camp... you’re walking. Why would a game about letting you do whatever you want whenever you want force you to walk around these outlaws?

They want you to treat these people like people, they want you to examine the useful elements of the camp, and they want you to think about where you’re going in camp instead of just running around to bump into whatever catches your attention the most. This ritual of walking around makes you treat this part of the game the way the designer wants you too, like it’s a group of outlaws you collaborate and live with.

Breath of the Wild

Breath of the Wild is a game about being a savior to a world well past its prime after you previously failed to save it. You can climb, glide, fight, explore, solve puzzles, and cook.

The cooking in this game is a wild mix between crafting systems, inventory management, and exploration. 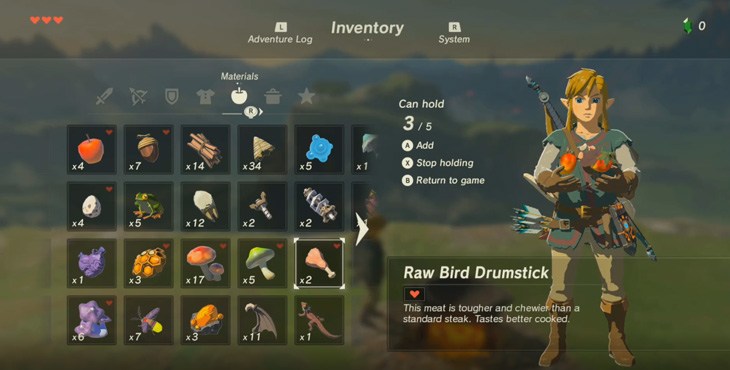 You go into your menu and add edible items to your hands. Each item you add shows Link, the player character, holding them in a big pile in his arms. Then you leave the menu while Link is still holding all the items and chose where to drop all those items you’re holding. If you drop them in a cooking pot then an upbeat instrumental song plays ending with a triumphant stringer as you find out what that pile of items turned into. Now you have a new meal with properties based on the ingredients.

They want you to explore, experiment, examine, learn, and apply what you know by breaking up what could just be a button press in the menu. You are treating the world like it’s there, the menu is a way to organize your actions not replace them. This promotes all of these pillars for the game and even makes them an easy, fun experience for the player.

What was good design for a long time was how enjoyable the main gameplay loop of the game was, but I personally feel that good design is a collaboration between the player and the designer that allows the player to have the intended experience.

This abstraction away from real world actions culminated into there being only a few mechanics in a lot of genres and old mechanics from the genre happening automatically or just being removed.

I went back to play The Elder Scrolls IV: Oblivion, one of my favorite games, and was reminded that the game starts you with a healing spell. It doesn’t have passive health regeneration, but it does have passive mana regeneration. So this spell that everyone starts with lets you go into a menu, equip the spell, press the dedicated “cast spell” button, wait for the cast time, and see the mana bar get converted to health. 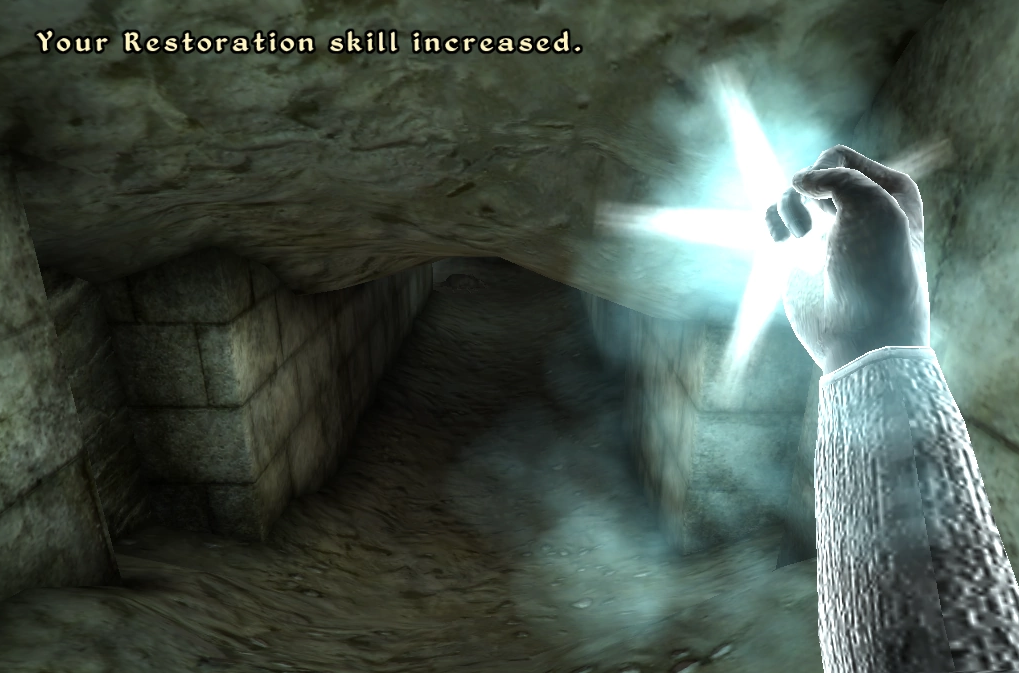 Compare this to Call of Duty: Modern Warfare where your health just ticks up over time as long as you aren’t currently taking damage. A lot of people would look at that change and say “This is good design. This recognizes the player’s intent and automatically serves its purpose.” But not having to do any action on the player’s part removes that dynamic gameplay element of Oblivion. It incentivizes the player to brute force solutions to problems and blame the game if it doesn’t work.

The same thing is occurring in both games; a regenerating resource is increasing the player’s health. But those individual actions in Oblivion each matter. Here’s a list of how these actions break down into gameplay.

One of my favorite additions to Call of Duty: Black Ops 4 is how the healing works. You press a heal button, an animation plays, you get healed, and then you can’t heal again for a few seconds. Streamlining healing in previous Call of Duty games removed a major tactical element the game could have had. With Black Ops 4 they added this mechanic so that players have to think about where and when they heal and try to play the game in a fast paced but intentional way. 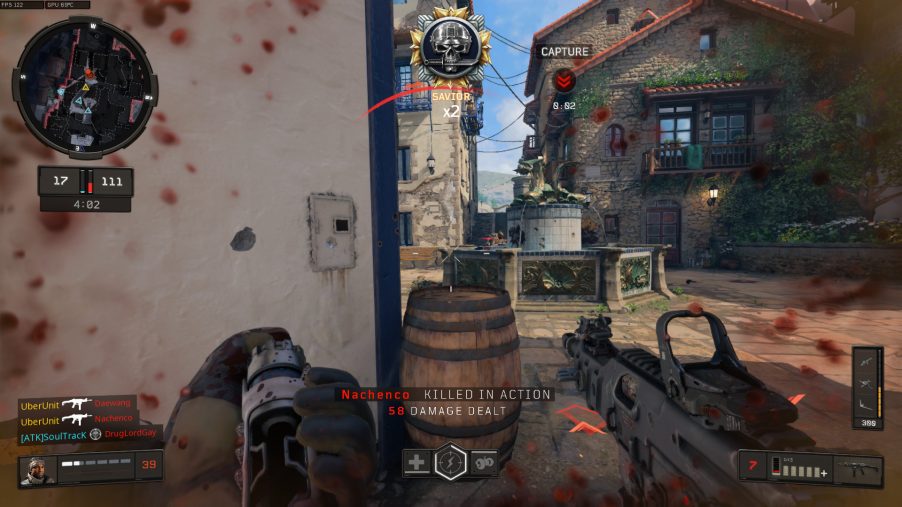 The actions the player needs to do changes their behavior in ways that increase their connection to the game and let them feel the conflict in what should be a tense situations. By having not just gameplay loops action loops, rituals, the player can get in the mindset you want them to be in when engaging with your game.

This sort of slower pace isn't meant to be a good idea in all games but mainly games that have a higher emphasis on history, locations, characters, and systems. Letting the player think and act at the same time can be critical to letting them engage with the game without being lost, confused, or bored.

Let me know what you think about this design pattern, how it's used, or any other examples you have of games that use these kinds of techniques.