While Obsidian gears up on new games like Grounded and Avowed, it hasn't turned away from last year's standout hit The Outer Worlds. This month saw the release of Peril on Gorgon, a new DLC adventure for the developer's capitalistic dystopian RPG.

To lead up this DLC, Obsidian tapped lead narrative designer Carrie Patel, who took over game directing duties from Leonard Boyarsky and Tim Cain. It's a huge task for any game developer to take the role, since it often involves a move into leadership over departments they weren't previously involved in.

What do players want in narrative DLC?

Peril on Gorgon is structured similar to some of the DLC content you might have seen in BioWare's RPG games from the 2009-2014 period, or what Gearbox has used to fill out its Borderlands releases. They're specific stories sequestered away in a new area of the game, meant to be experienced by players who've reached the endgame or new players attracted to the title with the release of new content.

Peril on Gorgon takes place on the sequestered Gorgon asteroid, home of a mysterious research facility. Patel credited the post-release development of Gorgon for giving Obsidian time to look closely at what players responded positively to in the original game, which helped her team hone the vision for the DLC. 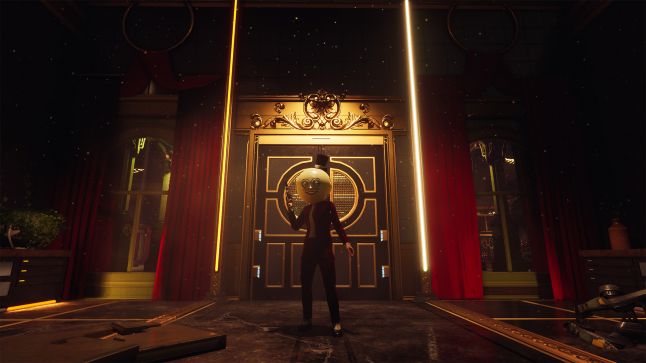 She said this led Obsidian to look closely at the game's Marauder enemy types and the in-game drug called Adrena-Time as sources of inspiration, since both go somewhat unexplored in the main game. Unlike most of the other games' areas, Gorgon draws players into a noir-type adventure by way of a package containing a severed arm, where a mysterious heiress tasks them with tracking down her missing mother.

Patel credited lead narrative designer Kate Dollarhyde with helping shape Peril on Gorgon's overall thematic direction. "One thing that Kate specifically brought up was the idea of the Manhattan Project and the notion of these people who work together on something terrible and destructive, and then they sort of split up and fell apart from each other," Patel said.

She said the team looked at the problem as "how you tell a story where someone's personal experience is very much what grounds  a much larger epic, world altering experience?"

What's neat about Patel's described approach is this storytelling focus centers on the game's non-playable characters, rather than the player character. She compared it to The Outer Worlds' other planet-driven arcs, which focused on local disputes informed by a system-wide crisis, and drift away from the game's main quest.

"This is one of the thing that I think that I think is very interesting about RPGs in general is that this genre has a reputation for being all about the the survival of kingdoms the conquest of world...but I think what many players really attached to are stories that feel personal."

Building a language to lead around

When it came to taking over the role of game director, Patel said there wasn't necessarily pressure to live up to Cain and Boyarski's original vision, and that the main challenge was in learning to provide vision for other, non-narrative departments that were outside her previous purview.

The DLC's noir-focused vision meant the team had to figure out how a far-off asteroid could resemble the classic look of '40s crime flicks, and how character and story could be filled out without an area filled with bustling NPCs.

"The pulp noir version of The Outer Worlds had really big implications for environment art and area lighting," she explained. "[As a director,] it's really helpful to just say 'here's the vision we want to create, and as a cross-disciplinary team, if we're all on the same page about this, what are the different tools that we have from our disciplines to do that?" 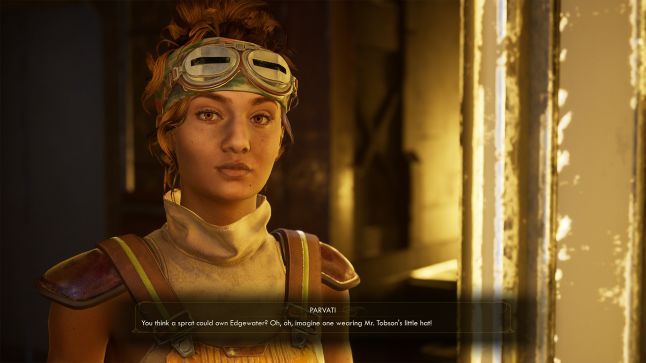 Laying the foundation for making that shared vision meant learning how to ask questions over her seven years with the studio. "I think doing well in that transition is very much about learning how to ask the questions that you need to ask," she said. "I will never be an expert programmer or an accomplished artist. But I do need to be able to talk to the programming and the art teams to understand what their processes and concerns are and how that affects the content we're gonna make."

Patel's narrative designer background gave her a new perspective on a classic RPG problem--what happens when you make great content, only for the player to speed right by it, or ignore it, on their choice-drive adventure? She explained that Obsidian's procedure by this point is to test and build around the possibility of any NPC in a questline being killed, but part of the process means adopting a mentality that players may not be approaching your game for the same moments you enjoyed in maknig it.

"Part of the beauty of an RPG, I think, is having a structure that is open and flexible enough to give all of those players enough room to make their story the way they want it," Patel said. "I think as a designer, you just have to accept that like, 'okay, I put this thing here, not everyone's gonna see it, but the people who are interested in it, who do look for it and find it like they're gonna I love it.'"

"In a way that makes it even more meaningful because you kind of know who you're creating those moments for."

Patel's leadership rise comes with one particular complication--the COVID-19 pandemic that moved the team to remote work. Any leader has particular challenges in uniting the team, but without face-to-face interactions, the normal tools of team unity aren't available to her. This led Obsidian to push for some creative teambuilding efforts.

One of them was Peril on Gorgon bingo. "[What] we actually did as a team that was that was pretty fun is have [Twitch streamer] Cohh Carnage play through the DLC over the last few days, and we set up an office bingo," Patel said with a laugh. The boards were specifically built to cover Peril on Gorgon's wilder moments, to see what he'd find in his run.

"It was something we could do to remotely just to connect around the stuff we worked on in a really light hearted social manner."