Devs reflect on the impact and legacy of Burnout Paradise

We could have titled this feature (in which Burnout Paradise co-creator Alex Ward & other devs reflect on the design & impact of the influential open-world racer) Paradise Lost & Found, but we didn't.
Kris Graft
Publisher
March 06, 2018

“Nobody was interested” in Burnout Paradise prior to its release, series co-creator Alex Ward tells Gamasutra.

“I remember taking it to E3, and pretty much nobody came to see it. The folks running EA [the game’s publisher] were thinking: ‘get that game done and then make another one’. We were just happy to survive it, really.”

The team at Criterion Games did a lot better than survive – they created one of the most-loved driving games of all time. Fans’ passion for the open-world racer remains to this day, and EA is poised to capitalize on that by releasing a remastered version of the game later this month, a full decade after the original's 2008 debut.

So what made it so special? And how, if at all, did it change the racing genre?

According to one of its creators, the idea for Paradise can be traced back to open-world games like Crackdown, Test Drive Unlimited and – in particular – Pandemic Studios’ Mercenaries: Playground of Destruction.

"I wanted it to be about discovery and exploration"

“Mercenaries was like my GTA,” says Ward, who left Criterion in 2014 to help start Dangerous Golf dev Three Fields Entertainment. “It was the first game I was able to overplay, to spend far more hours in it than the designers intended. The main realization I had was that the world, the landscape, was that game. You could have a lot of fun doing quite inconsequential things: can I make these cars crash there? What happens if I crash a helicopter here?”

"The main realization I had was that the world, the landscape, was that game. You could have a lot of fun doing quite inconsequential things."

It was that sense of freedom that Ward tried to carry over to Burnout Paradise. “My philosophy was that if me and you both played it for three hours, we’d both do different things. The idea was that it was this incredible world built with things to race and chase and smash, and you’d play with your friends, and it’s your game, and you can do whatever you want whenever you want no matter how many conventions that breaks. I wanted it to be about discovery and exploration.”

The result was a racing game without any defined tracks. Every junction in Paradise City could launch a new event, be that a race, a takedown mission or a stunt challenge. Players could start these at any time and exit whenever they wanted by stopping their car and then driving off to do something else. During races, players were simply given a finish line, and could take whichever route they thought would be the quickest.

The freedom extended to multiplayer, too: Ward says his aim was to create a space where people could make friends, almost like a “driveable chat room”. Players could roam freely about the city alone or in groups, making their own fun or completing challenges at their leisure.

And while it didn’t work for everybody – some fans disliked the lack of structure – it worked for most players, among them other developers.

“I was blown away by it,” says Paul Coleman, chief games designer on Codemasters’ DiRT series. “When it first came out I 101-percented it, got all the licenses, smashed every billboard, and played all of the DLC up until the Toy Cars pack [more than a year after release].” 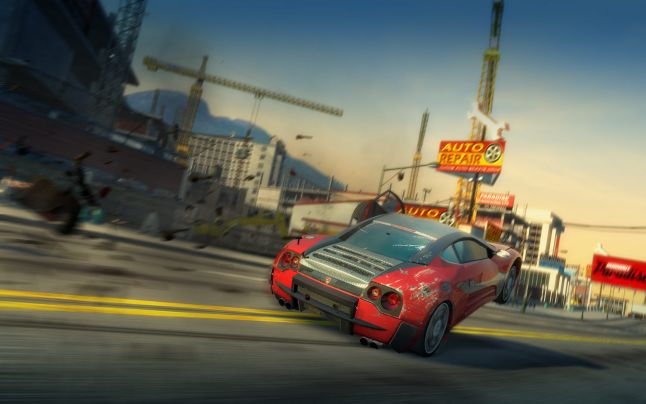 It was the game’s open-world setting, Paradise City, that kept Coleman coming back. Series such as Need for Speed, Midnight Club and Test Drive had already taken stabs at open-world racing by the time it released in 2008, but Coleman says Paradise was the first game to do that style of play justice – and he still believes it’s the most complete open-world racer ever built.

Laying the foundation for a generation of open-world racing games

“I think the Paradise world just felt so much nicer to exist in,” he argues. “It made people take note that you didn’t have to have a predefined track to enjoy a driving game. You see it today in games like [Forza] Horizon and The Crew, those areas have lots to do, but I still don’t think anybody has captured the right kind of size of package like Paradise did. The scale of the city and outlying area felt right for what Paradise was setting out to do. There was something to do at pretty much every junction.”

The open world is also what Lee Mather, creative director of Codemasters’ Formula 1 series, best remembers about Paradise. As Mather argues, it was a “brave” decision to ask the players to rely on instinct and memory to win races but, ultimately, one that paid off. “Coming to the end of a race you’d see the culmination of everybody’s different routes, joining you coming from different directions, so it still produced an exciting finish to a race…without being on the same piece of tarmac.”

The handling of the cars was spot on for the setting: a mixture of speed and control blended with the close-up crash physics that the Burnout series is famed for. Mathers recalls just how well it flowed: “You’d get into a rhythm, and you’d pick your shortcuts and crash through the signs, and from start to finish it was exciting and fast, it was never jarring. If you clipped a wall you had an awesome crash and then you were straight back in the action.”

Far from simply admiring Paradise, Coleman says that other developers used it as inspiration for their own games. Paradise “opened up” possibilities for the DiRT series and gave the development team “confidence” that a more free-form style of play would work, particularly in multiplayer. “In DiRT 3 we were able to shape some of the content choices and discipline choices around the style of play that Paradise had opened up. We made our first foray into open areas, and it started to become more Tony Hawk in terms of driving around and doing tricks rather than going from point to point.”

Burnout’s ‘Freeburn’ multiplayer – which allowed a small group of players to drive around the city in a single server – was particularly influential on Coleman.

“It was the notion of mucking about in an open area, having tangible rulesets to all either compete together or against one another," he says. "Without Burnout doing some of that stuff up front, there would’ve been a lot more question marks about what worked and what didn’t work. It gave us a lot of confidence...what we were doing was different but spoke to that style of competitive and co-operative play.”

The game’s influence can be seen clearly in other games that came later, says Coleman, particularly in 2012’s Need For Speed: Most Wanted. “You feel like you’re driving around in Paradise, but it’s a different city with licensed cars. The challenges and billboards, they’re all there, I really enjoyed the opportunity to play another Paradise-style game. It worked for me.”

As well as offering inspiration, Paradise provided “motivation to want to do better”, Coleman says. That’s especially true of the amount of content it offered, with multiple, meaty updates after its release, including ones that added motorbikes, a day-night cycle, new game modes, and a sizeable island built for stunts.

“It was incredible value for money, with reasons to keep coming back," he continues. "It certainly set a difficult precedent for everyone else to try and follow. We’d more likely be expected to release two games for that amount of development. It was a challenge for us to step up to that level, and I don’t think we’ve ever really achieved that.”

But despite its influence, Alex Ward says that when the game came out it “didn’t feel like a big success”. That perhaps stemmed from its time in development. He was never told what he could or couldn’t put into the game (it was his brainchild, after all), but it was clear than many people disagreed with the direction of Paradise.

"It was a challenge for us to step up to [Burnout Paradise's] level, and I don't think we've ever really achieved that."

“Nobody else wanted to make an open-world game,” he says, adding that EA was always reluctant to put as much cash behind the Burnout series as they could’ve because they thought it lacked the “cultural relevance” and showbiz appeal of the Need For Speed series. “That just used to annoy us because we all worked really hard on it.”

So, part of Paradise was about defying expectations, and making sure that the EA sales staff were inundated with orders from retailers that had sold all their copies of the game. And it worked: the game sold a million copies in its first three months, and the decision to carry on pushing out content stopped players from trading it in, which was a major concern for publishers at the time.

Ward says that whenever he returns to the game, it’s “very hard to look at it without saying ‘that’s wrong, that doesn’t work’”, and says there are lots of features that he wanted to add but that never made it into the game. But equally, he recognizes that it was “ahead of its time” in almost every way, as well as being “the world’s first [and arguably, only] social driving game.”

However you remember Burnout Paradise, the influence it had, and the respect it still commands, is clear. The remaster of the game is not just a good excuse to revisit Paradise City –  it’s a chance for a new generation of players to get behind the wheel.

“I’m looking forward to going back to the HD remaster,” says Codemasters’ Coleman, “partly because I want my three-year-old son to experience it for the first time. He’s probably a bit young for it, but he loves cars, and I think with the right, smaller PS4 controller he’s going to thoroughly enjoy playing in that area.”

He won’t be the only one.