A few years ago we began developing the JRPG Edge of Eternity. The game has recently reached its Early Access stage and though are still far, far, far, FAR from finished, we already have learned many valuable lessons about how to approach Early Access.

Be as transparent as possible

We are but a handful of developers, nine to be precise. Even though Edge of Eternity has many qualities going for it, we couldn't allow ourselves to be deceitful of what would be the final product: it is and will remain a game made by a small indie studio.

Being transparent was the best way for us to insure the players will be well-disposed toward your game throughout the whole development. Before the beginning of the Early Access, we were getting increasingly worried that the players would chalk Edge of Eternity as being on the same level as the heavyweights of the genre, like Final Fantasy or Dragon Quest - and that they would felt betrayed realizing that not all of the production values we could offer could be on the same level as those games. 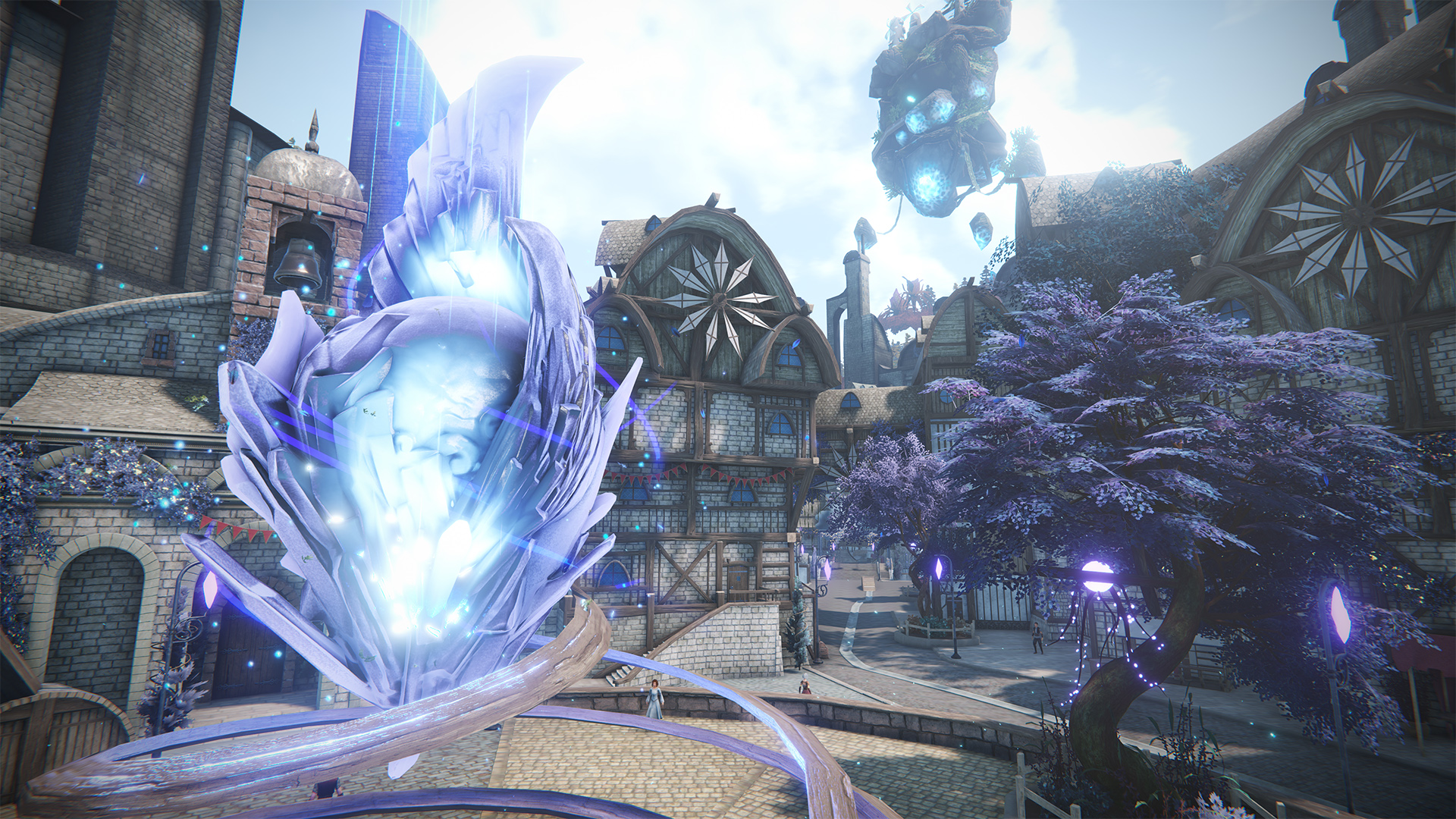 So even if we worked our hats off to provide the best vistas and environment we could, we had to make sure the players would not confuse us with a big production game. So we had to do some evangelizing to make sure everyone knew that Edge of Eternity was an indie game. 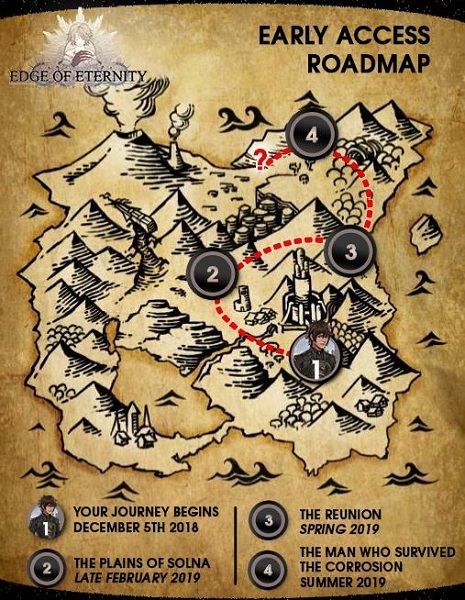 It came with publishing a full calendar of upcoming content and features for the next months. Nothing is worse for players to invest themselves (and their money) in a game where they are unsure of the payoffs.

Environment design, narrative beats and the calendar of updates

JRPGs are a narrative-heavy genre, which obeys quite strict rules when it comes to its story-telling. Much of the time, the fate of the world is at stake, the characters develop strong bonds throughout the story, plus there is the inherent theme of getting stronger (both of power and character.)

How can a story be told, and how can a world be fleshed-out when developing a game in Early Access? One of the problem with Early Access is that some players will discover the plot as the game is getting developed - adding storyline content to zones that already have been explored by Early Access players might not be a good practice - especially if they foreshadow elements that will be exposed element later in the game. 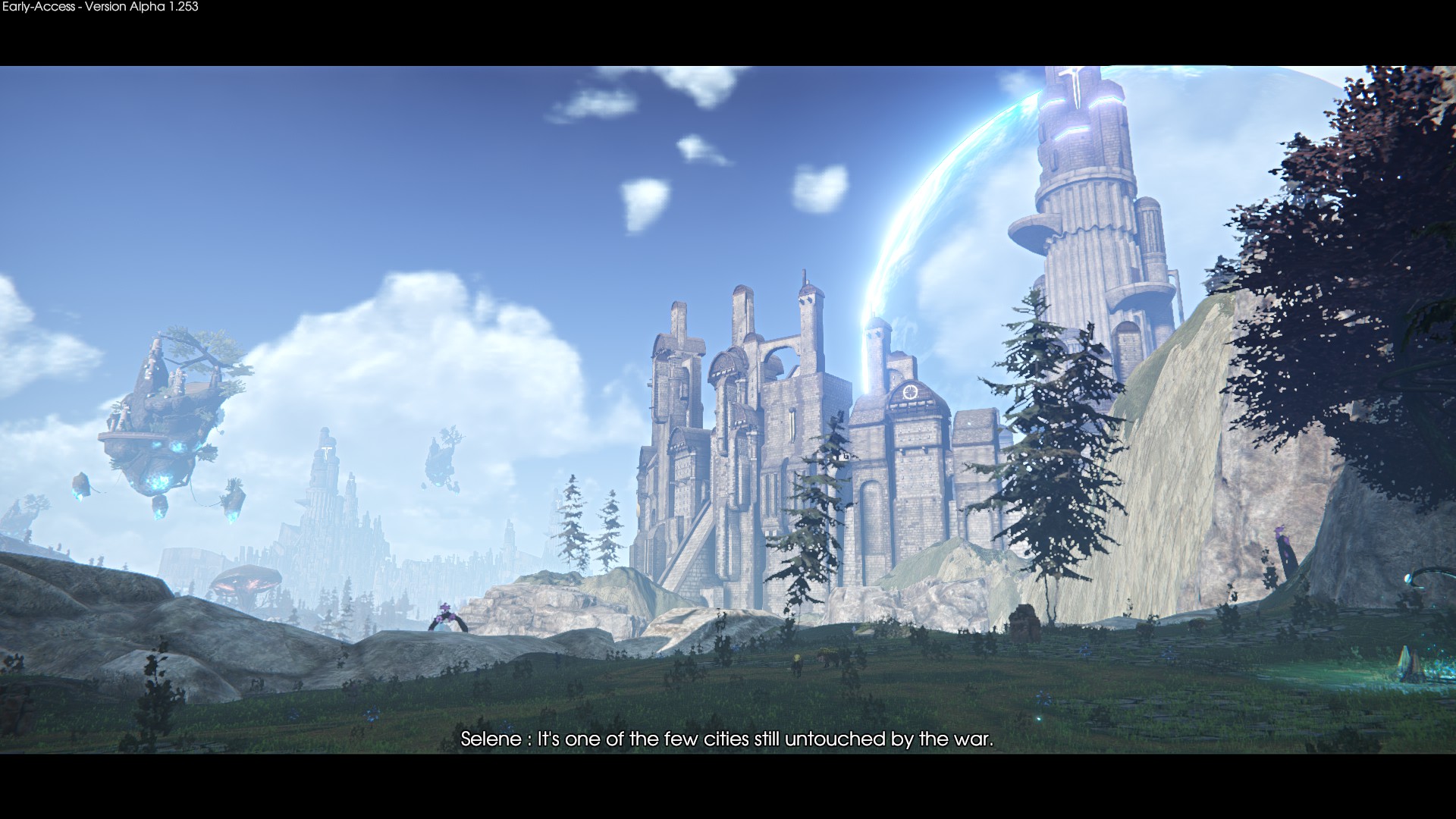 We are making an exception with the introduction, though. For the moment, the introduction is a non-playable slideshow placeholder. When the actual introduction will be implemented, the players, regardless of their progression, will be able to start up a new game and get up to speed with the new storyline content - of course, we are introducing sufficient foreshadowing and plot elements in the actual Early Access for players not to be completely surprised when a critical plot-point directly related to that yet undeveloped introduction will come up on screen.

So at that point, we decided to treat every update as a chapter, and each of those chapter like a self-enclosed episode - like an anime episode. Each of those chapters has its own stakes, its own theme, and details a specific aspect of the plot, or the characters, or the world - with a build-up and a conclusion - all the while serving the overarching story.

What definitely helps us - despite appearances - is that Edge of Eternity is an open-world game - with large sprawling zones that get unlocked every time the player finishes a story chapter. Each of those zone presents new quests, both main quests and side-quests, which allows the player to discover that new content organically - by exploring the world. 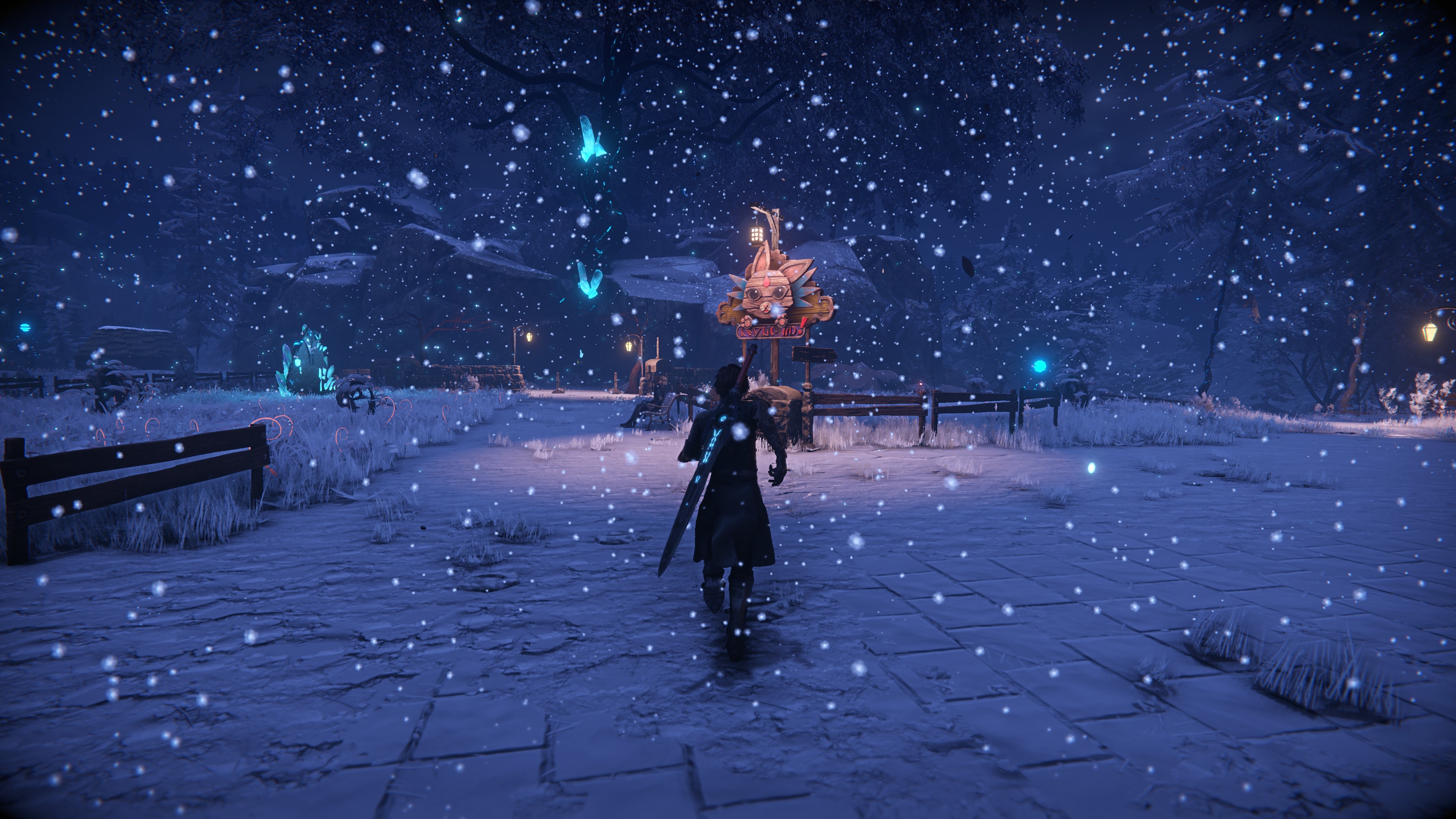 Commitment to the players

Of course it comes with commitment to the players. In every regard, Early Access developers are supported by their goodwill, interest and money. First of all, they are the best QA developers could ever hope for: they know best what they yearn for. One can unquestionably trust a player's feedback when they go to great length posting a long message about what they thought of their experience.

Unquestionably trust the players feedback, as they are sharing what they felt while playing the game: if they felt bored or disconnected from the game somewhere, there is obviously a problem to address. But always take with a pinch of salt the solutions they may suggest or come up with: while very often players offer sound advice alongside constructive criticism (we are aiming our game towards aficionados of the genre - so it is to be expected for them to be connoisseurs, if not experts), the developers need to never forget that they are the one with the long-term vision. 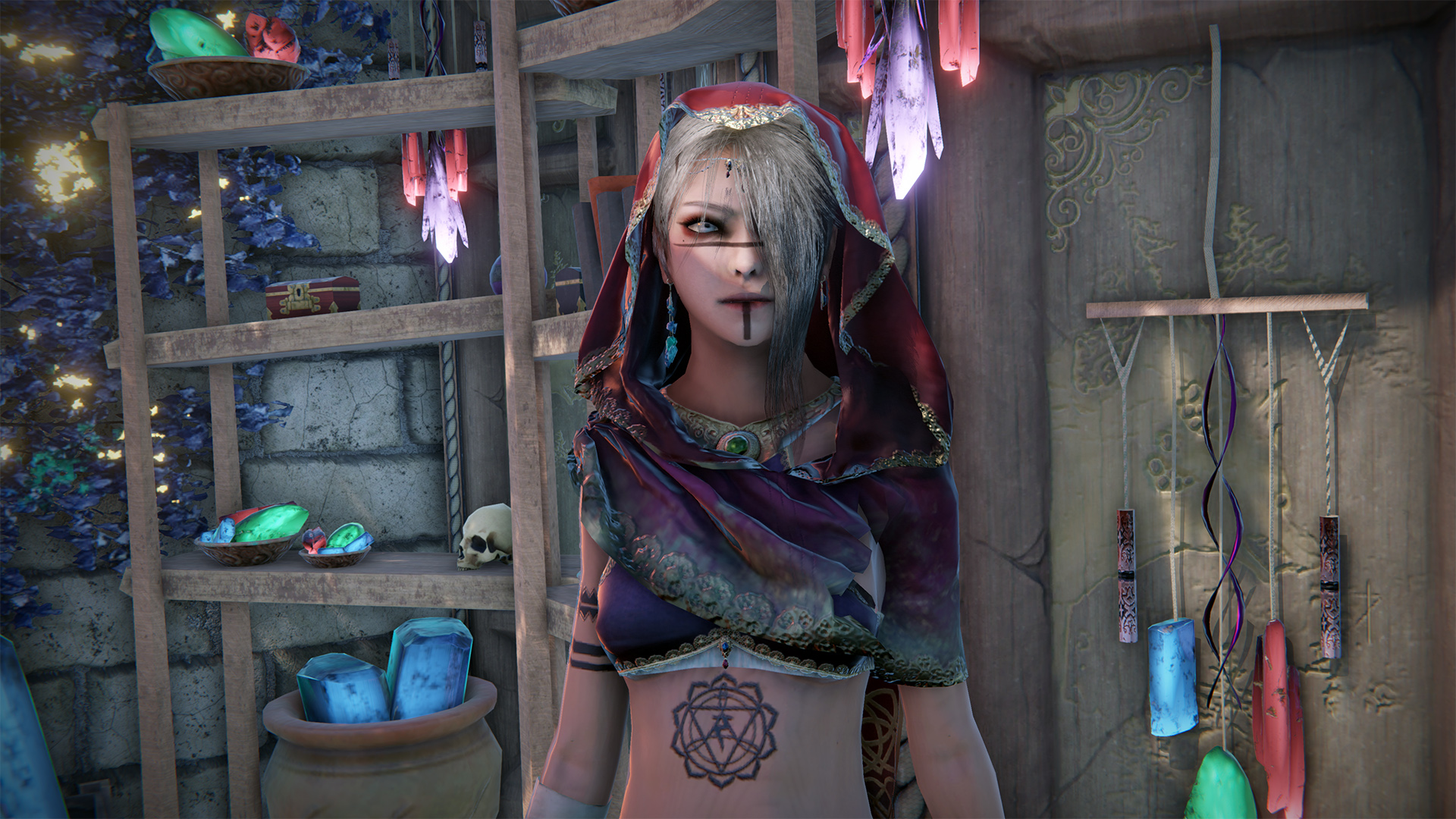 Perhaps every Early Access has its honeymoon, a short period of grace, and perhaps we are still in the middle of it. Still, we have made the choice to be as transparent as we can with our players, even if it sometimes mean developing things, adding features we had not envisioned. Adapting to the players need is not necessarily a short-sighted endeavor, as they can bring the attention of the developers on smaller aspects that may have been overlooked (and that might be easily added.)

So, in short, our experience with Early Access has been successful. Also stressful, without a doubt, but certainly doesn't amount as the same amount of stress as a full release. To be able to spread the stress of the players' reception over several months instead of a few days - is certainly another good - if unexpected - bonus of this Early Access.