In this article we talk about Warhammer 40,000: Space Wolf visuals and how we work with them.
Anastasia Skachko
Blogger
April 24, 2017

Warhammer 40,000: Space Wolf is a turn-based strategy with elements of a collectible card game. It's being developed by Kaliningrad-based company HeroCraft under a Games Workshop license. The game was first released in October 2014 on iOS. In July 2015, the Android version came about. Early Access version on Steam was released in February 2017.

In this article, we're going to talk about the game's visuals.

Warhammer 40,000 is a miniature wargame that takes place in a dark techno-phantasy fictional universe developed and produced by the British company Games Workshop. Our game tells a story of a Space Marines Chapter known as the Space Wolves.

We are paying a lot of attention to the visuals of the game, and we discuss every element of the universe with Games Workshop. For example, the characters' appearance – their armor – is a highly complex defensive system with a thousand-year-old history, multiple variations, and subtle details. Each element of the armor has a function, and without any of them the armor would be incomplete.

Terminators are elite Space Marines of the Imperium wearing heavy armor which combines the best qualities of power armor and dreadnought technology. It's a heavy suit of armor insulated from all environmental exposure and equipped with built-in personal weaponry. 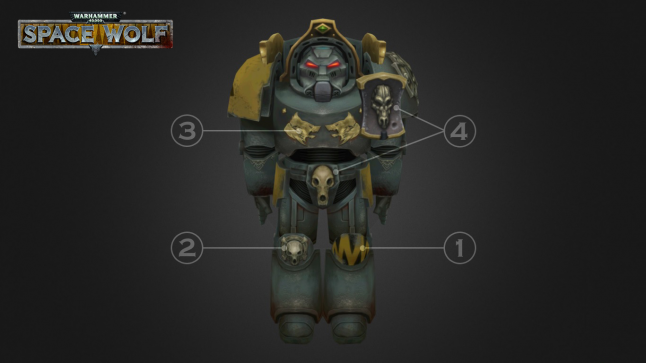 Black and yellow are the colors of the Wolf Guard, a company commander's personal guard. On Fenris (the Space Wolves' home), black and yellow were originally associated with nobility and respected tribesmen. The pattern of triangles on the left kneepiece (1) is a symbol of the pack in which the Space Wolf served before joining the Wolf Guard. In this case, it symbolizes a wolf's jaw.

The right kneepiece (2) bears Wolf Lord Ragnar Blackmane's symbol (the Wolf Lord of the company featured in the game). The two heads on the breastplate (3) is a protective symbol that depicts Fenris wolves Freki and Geri, constant companions of Leman Russ, the Legion Primarch (i.e. founder) whose "descendant" is this Space Wolves Chapter. Skulls on the belt and the shield (4) are marks of battle valor. Since both use elements of a skeleton and bones, it means they were given, among other things, for being wounded in battle. 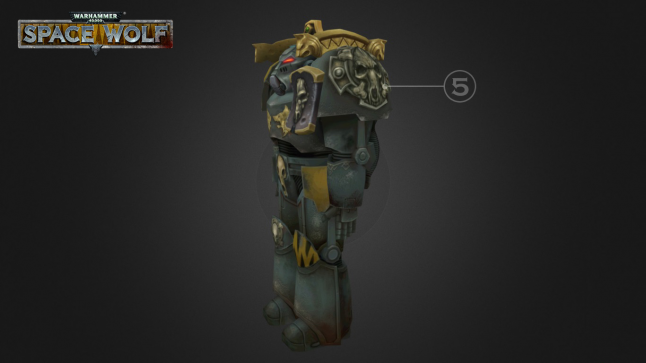 The layout on the left shoulder is the special symbol of Ragnar Blackmane's tactical task force (5). It's combined with Crux Terminatus, a special service reward that allows the Space Marine to wear Terminator Armour. 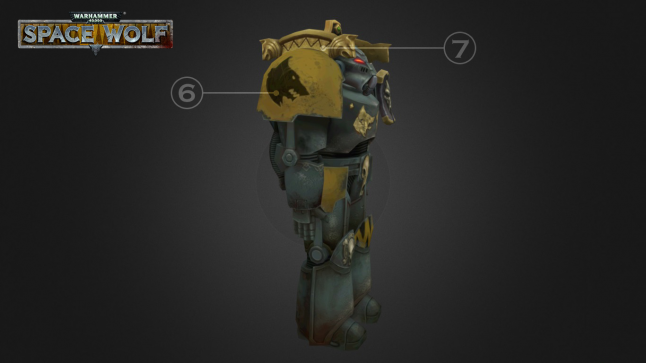 The wolf's head on the right shoulder (6) is a symbol of the company and of Wolf Lord Ragnar Blackmane personally. It's preferable, though not obligatory, that all members of the Wolf Guard replace their pack symbol (usually placed on the Space Marine's left shoulder) with the Wolf Lord's symbol. In this case, the symbol was not only replaced but also repositioned, and the pack symbol is now on the left kneepiece. Decorations behind the pauldrons symbolize Morcai, the two-headed spirit (7) who is a guide and protector of the dead, occupies a central position in Fenris mythology. 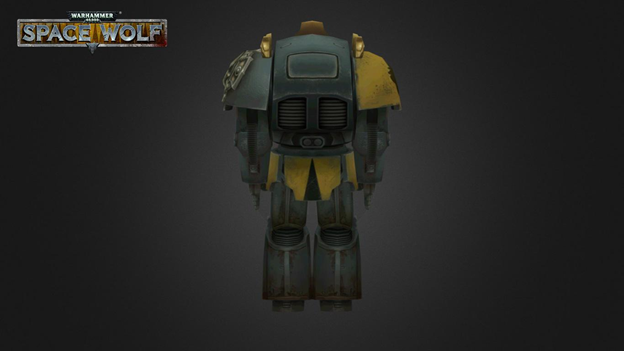 We begin by collecting reference materials to give the executors an understanding of the task. Usually there are several people working on one character: a 3D artist, an animator, a texture and special-effects artist, and a sound designer. The materials are collected from official source, but high-quality fan art can also be used. We also take a look at products under license, but, naturally, materials produced by Games Workshop are our main source of reference. 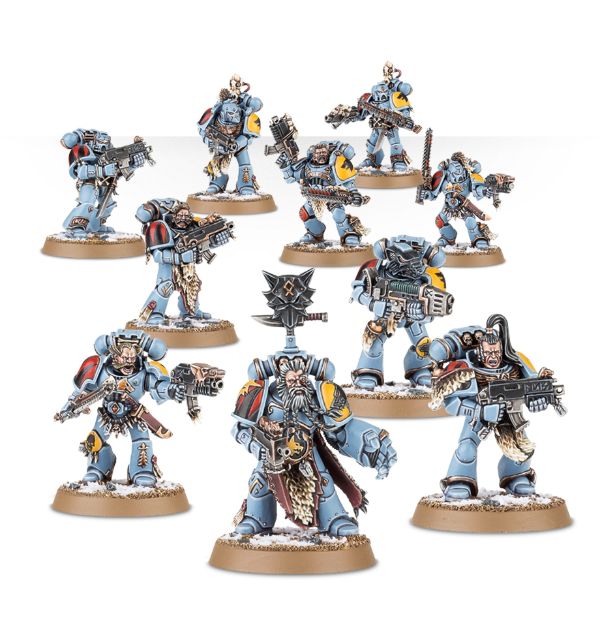 We don't do sketches, as all armor elements have already been established; basically, all we have to do is copy them.

Between 3,500 and 7,000 triangles are allotted to each model in our game. Why such a spread? The characters that the player is seeing all the time (the protagonist and his squad mates) are more detailed; for instance, a fully geared Terminator consists of about 7,000 triangles. The models that the player sees less frequently (those representing the Chaos Forces) consist of approximately 3,500 triangles. We don't use high-polygon models, as they're more resource-heavy; we're sticking with low-poly ones. 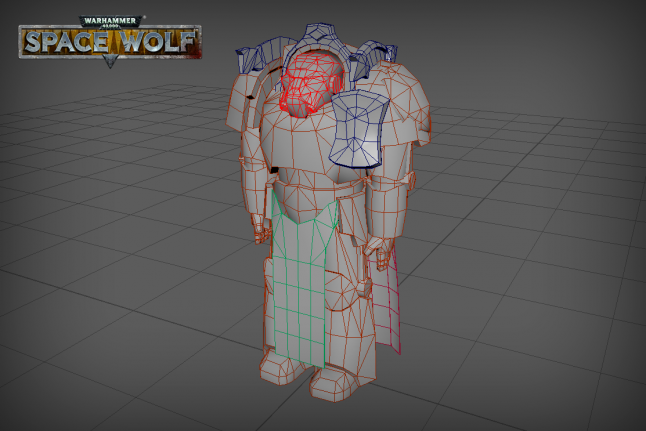 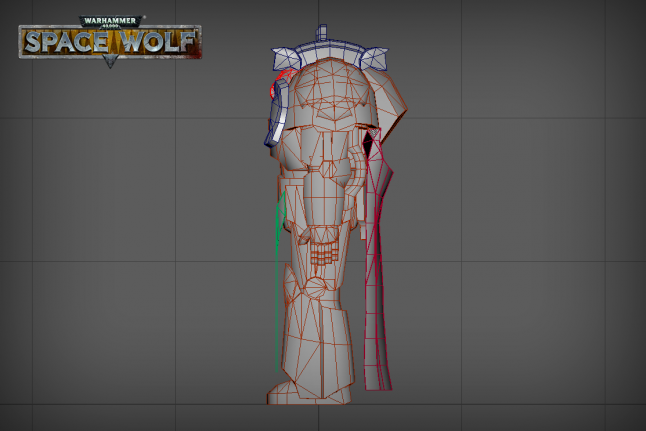 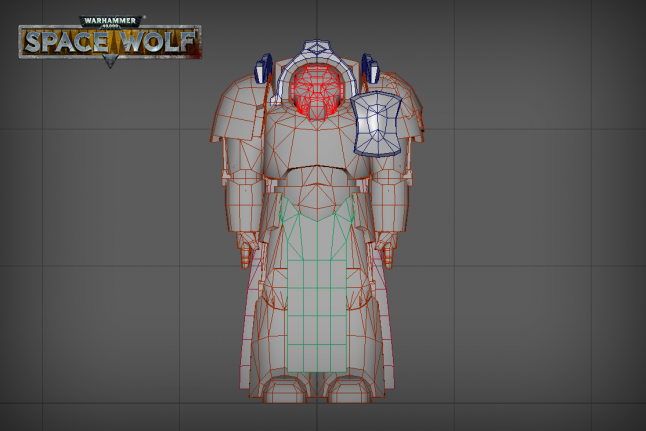 The head of the Warhammer 40,000: Space Wolf project knows the universe very well, and he can point out mistakes or deviations from the source at the model-creation stage. If everything is fine with the model, the artists start working on textures.

We use UV mapping to accomplish this: a map of the texture coordinates. With that done, the textures are painted by hand. Two types of textures are used in the mobile version: diffusion maps (color-based) and specular maps (shine-based). The source is painted at 2048x2048, then scaled down to 1024x1024.