"The main objective of Absolver was to create an online action game that reflected the beauty and depth of martial arts combat."
Kris Graft
Publisher
August 28, 2017

Absolver is a striking game that immediately grabs your attention in trailers and screenshots. It has a distinctive, surreal art style, with its sleek masked characters and sprawling natural settings.

Even in stills, the game conveys a sense of motion and crisp action that few games have captured.

But art and animation only gets you so far in this industry, a lesson Absolver creators Sloclap games studio seems to have taken to heart.

The real test for co-founder and creative director Pierre de Margerie was building fast, entertaining combat that matched the quality of the art, and balancing that combat around a core RPG progression system.

"The main objective of Absolver was to create an online action game that reflected the beauty and depth of martial arts combat," de Margerie says. "We wanted to create a game where player encounters and knowledge transmission were a key part of the experience."

De Margerie wanted to make sure that sort to knowledge transmission — organically learning how to be a better fighter each time you encounter another player — was more important than arbitrary stats or numbers.

Absolver's nuanced, impactful melee combat is in inherently skill-based, built around a number of martial art styles that define what moves and special abilities are available to them. It also relies on stances determined by how a character is facing their opponent, which gives players access to different Combat Decks or suites of attacks. 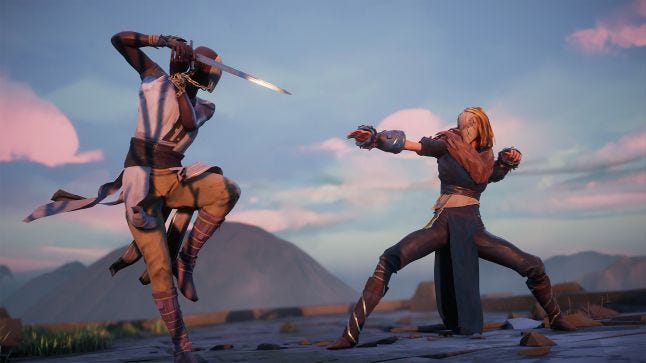 "RPG progression has an impact on the NPC enemies on your path. The archetypes will change depending on the player's level, and on whether players are alone or in coop."

"The Combat Deck is the main tool for defining your character's playstyle, and we implemented RPG mechanics to allow players to further refine their playstyle," he says.

"Variations linked to RPG parameters are less important than in usual action RPGs — one player will never have twice the XP as someone else — but they do allow us to have difference between characters, in the same sort of range as fighting game characters."

That progression system also helps determine what sort of enemies players will encounter as they make their way through Absolver's beautiful, deadly world.

"RPG progression has an impact on the NPC enemies on your path," says De Margerie. "The archetypes will change depending on the player's level, and on whether players are alone or in coop."

But in terms of player-versus-player combat, de Margerie and his team wanted to ensure that character progression wasn't the only factors in matching players against each other. 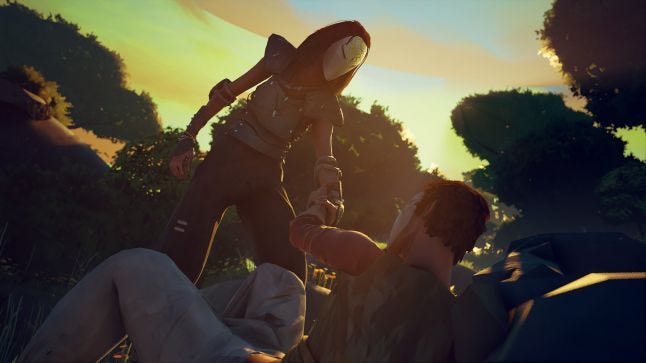 "When challenging other players in PvP game modes, players will be matchmaked in priority with other players of similar level. But the 'RPG level' is not the only factor taken into account: skill rating, which is used to measure the intrinsic player skill in combat, is also used for matchmaking." Especially towards the end game, skill will trump XP every time.

"The progression system has a soft cap, so RPG stats have less impact as players progress: player skill is what matters the most, especially between high level players."

"The progression system has a soft cap, so RPG stats have less impact as players progress: player skill is what matters the most, especially between high level players."

Out in Absolver's open world, however, players of different skill and experience levels can freely encounter each other, which is key to de Margerie's concept of mentoring and knowledge transmission.

"A Prospect," which de Margerie explains is the rank given to new and untested players, "can meet an Absolver, creating an opportunity to learn from (and get helped by) higher level players. Also, friends of different skill levels should still be able to invite each other and play together." 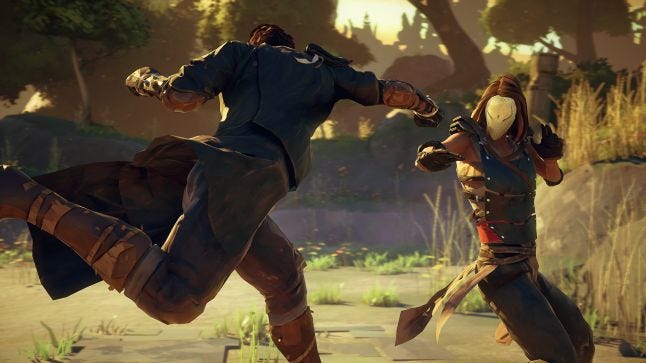 In my time with the current beta build of the game, I found the RPG systems to be a way to flavor your character in minor (but meaningful) ways, but not dramatically change the way the game plays or the combat handles.

Putting those systems more in the background, as a support system to real learning and skill, makes the task of balancing the game easier, but de Margerie makes it clear that it's a work in progress.

"We hope the current system will be pretty well balanced on release," says de Margerie. "But this will be a live game, and we certainly plan on updating the game after launch!"

"We may tweak certain attacks and update NPC behaviors if needed. We have very cool plans for additional PvE content after launch, with new environments and enemy archetypes."