SEARCH
A minimum of 3 characters are required to be typed in the search bar in order to perform a search.
Announcements
Alert
We are currently working to fix issues with cut-off articles and incorrect URLs. Click here to report an issue.
News
Gamasutra is now Game Developer! Click here to learn more about the change, what's new on the website, and what's next!
PreviousNext

Space combat simulators have been a staple of video and computer games since the beginning. From Spacewar! to Elite to No Man's Sky, as technology has advanced, the genre has seen all kinds of approaches to flight combat design.

Enter Double Damage's Rebel Galaxy Outlaw, the recently-released sequel to 2015's well-received Rebel Galaxy. According to Double Damage co-founder Travis Baldree, Outlaw is a “sci-fi/blue-collar pulp fiction in space,” closer to “the punchy fireballs-and-oil aesthetic of Mad Max" than “the elegance and futurism of most science fiction.”

This same punchiness defines the moment-to-moment experience of playing Outlaw. It’s less than 15 minutes from the animated introduction before the player -- as the scarred and sardonic Juno Markev -- is trading shots with pirates, weaving and barrel-rolling from the cockpit of a space junker while guitar solos shred from the radio.

“We still wanted that early feel of being down on your luck, hard up for cash, and scrambling for an advantage that’s intrinsic to classic Privateer and blue-collar crime fiction," said Baldree. "But the explosions and weapons fire should still feel innately satisfying even if you’ve only got two credits to rub together.”

A combat feature inspired by Call of Duty 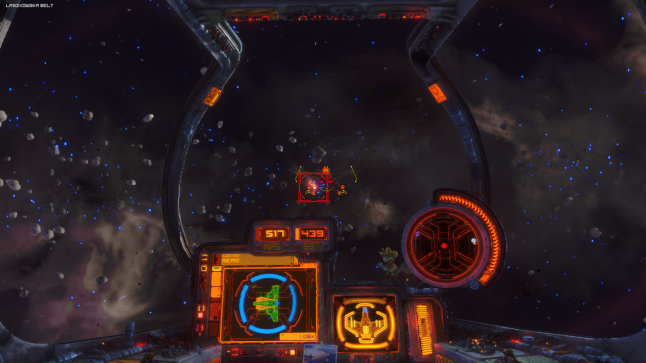 Key to Outlaw's immediate accessibility is the (totally optional) "autopursuit" feature. By locking on to an enemy ship and holding down the left trigger, Juno will automatically orientate toward that target and tail her quarry at the appropriate speed, keeping the target in view. It's quite the change from typical flight sims where the target is constantly zooming out of view, and dogfights consist of an endless series of big loop de loops.

There’s still plenty of challenge in balancing power output with evasive flying, but the immediacy of autopursuit means combat stays exciting while still allowing players without a digital killstreak stretching back to the genre’s heyday to feel the thrill of outmaneuvering skilled opponents.

“Howie [Day], our art director, was playing Call of Duty: Infinite Warfare and mentioned they had a key you could hold to basically make you feel like a space badass and follow your target while doing automated maneuvers.”

What existed as a combat aid in Infinite Warfare became, in Outlaw, “a tool that’s useful everywhere -- from following and matching speed to a friendly target, or tethering your view to a waypoint, and functions in conjunction with the hard-lock target system so you can basically use it to ‘find’ a target anywhere in 3D space.”

Baldree initially tested and decided against implementing flourishes like barrel rolls, but after tweaking elements like target prioritization, arrived at the iteration of autopursuit as it currently exists.

“It has the additional benefit of ‘smoothing out’ a lot of the jaggies of overcorrection in classic space sims, so the dogfights end up feeling tighter, more controlled, and more cinematic," he explained. "You get to spend more time with your target up close rather than endlessly jousting a distant dot.” 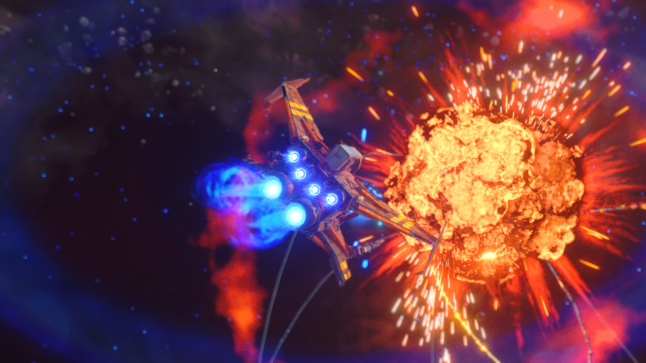 A dogfight is only as good as the pirate lord or zealous cultists on your tail are dangerous. Individual enemy AI pilots have several different values to dictate their behavior in combat. These two factors -- which Baldree refers to as "bravery" and "skill" -- decide how foes engage, their use of countermeasures, how aware they are of incoming missiles, and how apt they are at surrounding Juno.

“Mostly ships feel different due to their maneuverability, survivability, and their weapon and turret configurations," he said. "Comms add a little gravy to that and make them more flavorful. But those ships' properties are tuned to evoke a general feeling -- the zealots are all generally zippy and irritating. The Red Devils tend to use tracers and autocannons and have a more solid and punchy biker feel to them.”

The AI buddies Juno can meet and recruit to call on in a pinch are balanced in a similar way, with their ships and arsenal lending them personality. As well as providing some solid combat support, or at least a distraction in hairy encounters, these companions are also a great ego boost, frequently complimenting Juno’s piloting chops.

A huge factor in making Outlaw’s dogfights feel cinematic and varied is that all-important moment players defeat a foe in combat. Sometimes, an enemy ship will tear apart instantly. Sometimes they’ll catch fire and lose control, careening into the outer hull of a nearby space station, sending you a final transmission of the moment they realize they’re space dust. There’s something almost Pavlovian about how bespoke and finely-tuned the delay between tearing the ship apart and the final explosion feels. And it’s no accident.

“It’s one of those numbers you just twiddle endlessly to try to dial in on a specific frequency of occurrence," said Baldree. "Sometimes you want that instant ‘bang’ on impact, where your ordnance detonates them, and sometimes you want that corkscrewing death that might collide with something else.

"Once any target enters ‘death throes’, any subsequent impact results in instantaneous detonation -- very satisfying if they curve into the side of another ship. Ordnance based deaths (missile impacts) are generally always instantaneous, because it’s more satisfying -- lobbing a torpedo and having them instantly explode is a great feeling. It’s all the rewarding ways we could assemble to break the pinata.”

With such a focus on making ship-to-ship combat the star of the show, it seems natural a few ideas would be jettisoned along the way. The team “left remarkably little on the cutting room floor,” said Baldree, but a few weapons still didn’t make the cut. A mine launcher (“lobbing stationary objects in front of your moving ship isn’t a terribly great idea”) and more beam weapons (“it just didn’t have the kick of projectiles, and felt anemic”) were both tested and abandoned. 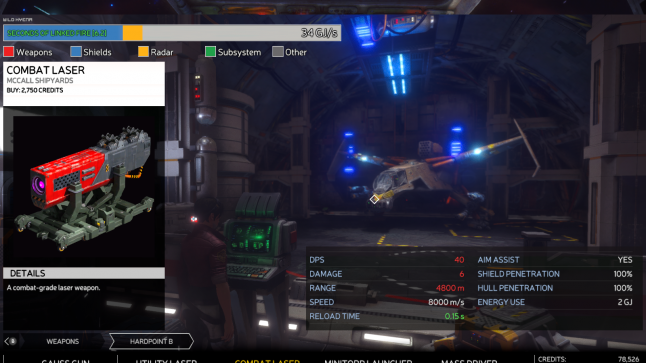 “Howie would still love a ‘fire-all-missiles’ button for that Death Blossom moment, but I’ve been stubborn about the balance, control, and performance implications.”

The team had also initially planned for the larger capital ships to have various subsystems the player could take out individually, but this felt antithetical to the pace and feeling of combat established elsewhere. Instead, they went with destructible gun-turrets.

“Eliminating turrets captured that element of precision strikes on a bigger target better than disabling a systems feature you might not be able to ‘read.’”

“At a more macro level, Erich [Schaefer, president at Double Damage Games] and I really discarded a lot of our old action-RPG balance playbook," Baldree said. "Instead of worrying about a long treadmill of incremental updates, we refocused on less weapons and ships, but more interesting character classes [instead of] character levels. We came at it from a different approach, in that the combat should always be satisfying and fairly fast-paced, and that any ‘balancing’ that drug that pacing out wasn’t the sort of balancing we needed.”

Aside from the broader design choices, there were smaller moments Baldree and his team brought into the game. Moments like Juno flipping off foes like a truck driver that just got cut off, or the pilots that hang in space after you tear a ship apart.

“We cared a lot about little moments and touches in the game, and hopefully it shows, and gives people a little smile when they catch them," he said.