William Pugh, the game designer known for his work on The Stanley Parable and Accounting +, explains his approach to humor in games, and the importance of preserving the joy in ones' work.
Phill Cameron
Blogger
February 25, 2020

Comedy is a difficult thing to get right in video games. It’s certainly not impossible, but it’s a task that many have struggled with over the years.

William Pugh, however, has made a name for himself in the industry for his offbeat comedy games: from his collaboration with Davey Wreden on the hugely popular interactive drama The Stanley Parable to his hilarious and elaborately-titled debut game with his studio Crows Crows Crows, Dr Langeskov, the Tiger, and the Terribly Cursed Emerald: A Whirlwind Heist. Perhaps nowhere is this more apparent than in his recent collaboration with the Rick and Morty creator Justin Roiland’s studio Squanch Games, a partnership that resulted in the VR title Accounting+.

Accounting+ casts players as a candidate participating in a bizarre VR accounting experiment. Players will explore a collection of peculiar worlds and will encounter all sorts of weird and uncomfortable situations as part of the test, in a strange and humourous adventure that will likely be familiar to fans of both Roiland and Pugh’s previous work.

In order to achieve its loud and abrasive type of comedy, the game relies heavily on improvisation, with the team at Crows Crows Crows and Squanch Games trying not to overthink the process or risk losing the game’s spontaneous charm. Over the course of half hour at Yorkshire Games Festival, we chatted to Pugh about his unusual approach to game design, as well as his advice for others making comedic games.

The story behind how Accounting+ got made is just as hectic and unconventional as the game itself. It came about from a lie that Pugh told Roiland about working at Respawn Entertainment. Roiland was in San Fernando, California and wanted to see if he could tour the Respawn studio, so the Yorkshireman Pugh, being ever the opportunist, reached out on Twitter pretending to be from the studio, despite not even living on the same continent.

After admitting to being less than truthful about his employment status in a direct message to Roiland, Pugh introduced himself properly and the two hit it off, with Roiland having previously played The Stanley Parable. From there, the two began discussing some potential ideas for a collaboration, eventually settling on the concept of a VR game.

Pugh explains, “It was like, the only thing that had kind of been done in VR was essentially tutorials for the hardware or showcases for the hardware. [It seemed like] the whole purpose of all of these games was to sell investors on this format being something that was going to make billions in 10 years. So the idea was what if we have a game like this, that is uncomfortable and not nice to play and kind of aggressive. Like it’s going to be easy and comprehensible and a child can get it, or people who get spooked by loud noises.”

The format was a huge influence on the type of jokes in Accounting+. For instance, the story continuously references the fact that you are wearing a VR headset, with the tutorial in particular being a painfully slow persistence gag about tutorials in VR games.

Here Pugh voices an in-game assistant called Clovis, who relays the information needed to play the game at a sluggish pace, to the inevitable frustration of those playing. This isn’t really a joke in the traditional sense, in that there is no explicit set up or punchline. Instead, it is an indirect riff on tutorial levels, which feeds on player expectations of the genre.

Hilariously, although the tutorial does a great job of introducing the interactions to non-VR players and establishes the self-referential humor, Pugh tells me that the scene has resulted in the game demoing poorly at conventions, with some players not necessarily getting the fact that this section was intentionally frustrating. Something that is admittedly quite humorous in itself.

Much of the voice lines in Accounting+ were improvised. How it would work is that Pugh would give the actors specific beats they would need to hit and then the actors would go away and record their lines separately, coming up with their ad libs to spice things up.

“The tree guy level, we sat down and we thought about what would be cool,” Pugh recalls. “We noted that down and then Justin essentially grabbed the mic and just ran for six or seven minutes and he cut that up himself.” 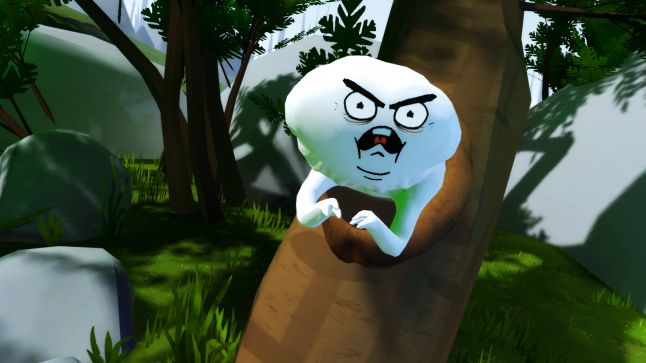 Pugh highlights another early scene to demonstrate how this worked. This particular scene takes place in a back alley, where the player is confronted by a gang of animal creatures. He continues, “[That scene] has got Rich Fulcher as the dog. Cassie Steele as the rabbit. Then you’ve got Vatche Panos as the mouse, who is another kind of Rick and Morty person. All of these three recorded separately and they all improvised separately. And then what happened was I went in and each of them had like a thirty-minute-long voice file with all the cues and I edited that into they are all speaking together.”

This allowed them to achieve the games a more laidback and spontaneous energy, with the actors not just doggedly sticking to script, but experimenting and exploring what they personally found funny within set parameters. The approach gives the game a sort of slapped together feel, despite its three-year gestation.

“You want it to be thrown together in a way,” explains Pugh. “Because I’ve found generally if you’ve spent a long time working on something it gets old and you start to lose the joy.” He adds, “If I told myself after Stanley, you’re going to make a car chase sequence where you’re killing a bunch of cops with flowers while Rich Fulcher from The Mighty Boosh in dog form is shouting you from the front of the car, that would have made me so happy.”

One of the most pressing issues with writing humor for interactive games is that it is very easy for the player to get distracted or miss an important beat. To get around this, Accounting+ is what Pugh calls “content-rich,” with players constantly being barraged with new jokes and situations to react to.

“It’s very difficult to force people to stop,” Pugh comments. “There’s so much stuff packed into Accounting+. The radio in the game, for instance, has, I think, 16 different pretty funny gags and no one is going to listen to all of them…I think you…could have made something that was twice as long with the same parts really."

As an example, Pugh recalls one specific scenario where a player skipped a section of dialogue during a court trial scene where they are judged for the murder the VR king. In this case, the player managed to accomplish this through opening the box of little public defenders on the table too quickly, triggering the next set of lines. This demonstrates some of the problems with pacing comedy in an interactive environment.

Despite Pugh being a font of knowledge about alternative comedy, over the course of the interview he often seems reluctant to give any definitive advice. In closing, we ask him why that it is.

“I don’t like giving advice, because I don’t think I have the answer to succeed at this,” explains Pugh. “For me, I just feel like I’m just doing the best I can do and figuring it out. I could absolutely destroy this game critically speaking. I could point out why this really sucks and why it doesn’t achieve what it is trying to achieve, but in a way…it doesn’t matter.”