Now, the company has released its next game Afterparty. If Oxenfree was the studio's snarky teenage little sister, Afterparty is its anxious, insecure, hard-drinking college cousin. In this entry, players take control of Milo and Lola, two graduating college students who've landed in the depths of Hell and now must drink their way out.

A few weeks ago studio co-founder Adam Hines dropped by the GDC Twitch channel for a chat about Afterparty's alcohol-fueled dialogue trees, the challenges of embracing new narrative structures, and how to write authentic younger characters in the video game format.

Afterparty's first major difference from Oxenfree is the use of semi-customizable dialogue trees. In Oxenfree, players always had three choices available to them in the game's branching conversations, and the game evolved based on the dialogue and plot choices they made.

But in Afterparty, players only have access to two dialogue options by default. To access the third, their character needs to chug one of many drinks available at the in-game bar, giving them a shot of liquid courage, some alcoholic anger, or a bit of tipsy flirtiness depending on the drink.

The first design reason for this conceit, Hines explained, was to rewrite drinking mechanics as "fun" and not just a hindrance for players.

"We definitely wanted to make drinking be fun in this game and to be 100 percent fun and not be any sort of a hindrance or penalize you," said Hines. "Because in every other game...you’ll drink and the screen will get wobbly and you can’t walk. And we obviously can’t do that with this game because the entire game is about going to bars and having a drink and have that affect you."

This design drastically expands the number of choices in Afterparty compared to its predecessor, but Hines says it lets players take agency over their personality type and how they approach gameplay puzzles. He pointed to one puzzle where players could either rile themselves up and start a fight, or  get cocky and challenge an NPC in a game of beer pong. "It kind of dovetails into the puzzles and kind of how you want to approach certain obstacles and goals."

To wrangle all these choices, Hines said Night School's design priorities didn't change that much moving from Oxenfree to Afterparty, but like many choice-driven games, it meant the team needed to allow for a broader array of player decisions to navigate a space. "Whereas in Oxenfree or other narrative games it’s very just context space," explained Hines. "It's just the things that you say above your head and the menu are exactly what needed to be in at that time. 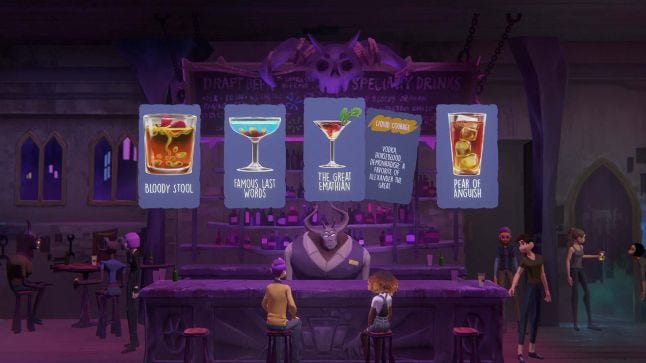 "But in this game of course if you’re drinking a drink and the drink makes you really angry, there has to be an angry choice for every possible time you can speak in that bar. That made it hard sometimes because it’s like if you want to challenge someone to a fight we have to let you kind of do that and have it somehow get back to the main plot and spiral out of control to this whole other game."

"That was the hardest part-- making it feel like you’re able to customize your experience as much as you would want to but not make a game that has 800 hours worth of content."

Part of Afterparty's conceit is that it's a comedy game, and not to explain the joke, but one of the most important tools in a comic's toolbox is timing. Hines explained that Afterparty's replayability comes from of its array of jokes, many of which don't show up on a player's first run.

But even with total control over content, actors, line delivery, and triggers, Hines said that Afterparty's comedy was still one of the toughest elements to designs. "Honestly the tough part yeah particularly with comedy is the timing. If the timing is off even a bit then the joke is killed."

Players wandering around the game space then becomes one of the biggest enemies to ensuring proper timing. "So there’s very little times where we’ll force you to stand here or lock in the view-- we definitely had to do it more than in Oxenfree because there’s way more going on on the screen."

Hines pointed out that the Afterparty's bar-themed environments made it easier to hide those control-yanking moments. In Oxenfree, players were explicitly tasked with exploring the nooks and crannies of a haunted island. In Afterparty, they're on a stool, or sitting on a couch, or leaning against the bar.

"It was still hard at times," said Hines, with some regret. "We’ll watch people play it and go ‘here comes this brilliant joke!’ and then they’ll walk off screen right as it hits but you just have to let that go because of course the freedom of being able to skip it is worth so much more than ‘now you got my dumb poop joke that I put in there.’"

Hines also broke down one of Night School Studios' secret weapons for railroading players into essential information and jokes--the art of a well-timed interruption. In most games, interruption is a structured even, unfortunately baked into dialogue and telegraphed by voice actors cutting themselves off before the next actor can step on their lines. 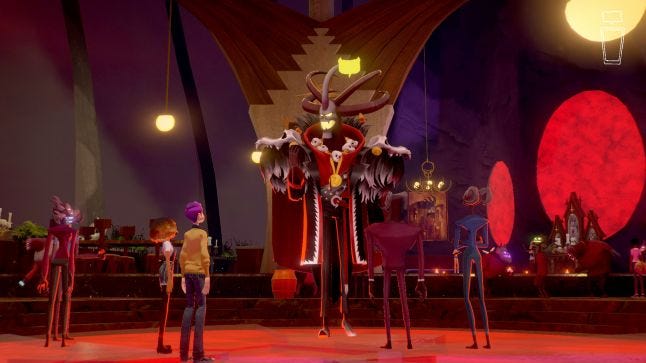 In Afterparty (and Oxenfree), characters interrupting each other is a baked-in mechanic. Instead of waiting for lines to finish, if the player is advancing through the game while characters are talking, the game will fire the new lines of dialogue, then if necessary, have the characters pick up their conversation from where it left off. "The sad answer is that it’s just a lot of writing," Hines explained. "There isn’t really a trick to it, like how to make the interrupts work is that you just put a ton of bookmarks in the conversation."

"What that means is that when we know at any point you can cut off a line or cut off a thought, now this has to be three or four or five lines then that can feed right back into what they were saying."

Hines had strong opinions for why this feature helps games like Afterparty stand out. "I never really want to hear repeating dialogue in a game because it breaks your immersion," he said. "You get that a bit in Afterparty just because you’re able to challenge demons beer pong and lose, and you have to be able to re-challenge them in situations like that where we can’t write infinite versions of ‘OK again, beer pong.’"

"So you’ll just have to hear repeating stuff there, but as much as possible I [want] it to feel like it’s just a natural flowing talk."

It's worth noting that Night School Studios is now two for two on games that center around youth and transitioning to adulthood. Hines laughed when it was pointed out neither he nor co-director Sean Krankel had been the age of their characters for a while, and explained Night School has a specific vision about creating character voices.

"This is going to be very random reference but I remember when Dawson’s Creek came out, the reviews for that show were like ‘No teenager talks like this. They talk too smart.’ And I remember thinking ‘Why is that a bad thing? That’s OK!’ Hines said."

"If the character’s sound different than how you would naturalistically expect them to be able to express themselves it’s OK as long as the stories are impactful and interesting and the characters are unique and engaging, then you’re doing your job and that’s all you need to worry about."

Hines said both Milo and Lola each have unique driving motivations Hines thinks still connect with the young people they represent. Milo's character is founded on a classic "fear of missing out," and Lola embodies a sense of being overwhelmed by the horror of the world. 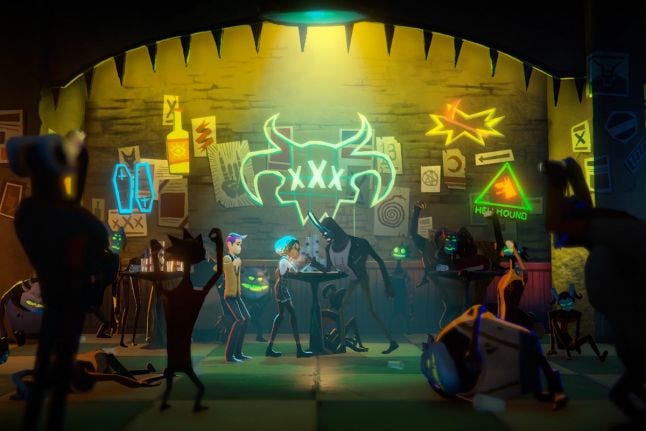 Milo and Lola also are another example of one of Hines and Night School's prime interests---telling genre-blending stories semi-reminiscent of a streak of '80s movies. "I don’t think you’ll ever see us make 100 percent comedy, 100 percent horror, 100 percent action," Hines explained. "Afterparty could have just been a bar crawl and you’re out with a bunch of random people and you’re getting out of college and you’re thinking about what’s next to do, but we wanted again, something crazy to add so we just put you in Hell."

"So we’re always going to have kind of a mix of things, and we like the counterbalance those things make."

It's a different take on the Amblin Entertainment-inspired game design culture, prioritizing the mix of coming-of-age and genre over the genre. But it's all a part of a stab at authenticity, one that will likely continue in the games that come after Afterparty.

For more insights on the development of Afterparty, you can watch the full chat with Hines in the video below.