Design notes from the making of Treachery in Beatdown City

Treachery in Beatdown City's lead developer breaks down a different way to do retro-themed games for your benfit.
Bryant Francis
Senior Editor
April 15, 2020

When developers make games with a 'retro' aesthetic, they often rely on a specific set of references that defined the early days of video game history. But with Nuchallenger and HurakanWorks' Treachery in Beatdown City, the past isn't just a time to revisit, it's a treasure trove of tones and references to remix and make modern.

With nods to Escape From New York and the limited AI programming of games like Double Dragon, lead developer Shawn Alexander Allen and his collaborators have created a fascinating spin on what it means to make 'retro' games. To that end, Allen was gracious enough to share some of his thoughts on the decisions behind Treachery in Beatdown City's development, which you can now read below.

What were the origins of Treachery in Beatdown City, and what was the point in development where you thought "this would be a great game?"

A brief history: I wanted to make games after meeting a bunch of great people who were doing just that, and so I looked at what I felt was missing. At the time beat ‘em ups were very few and far between, and they still are, so I decided we should do that. While developing the game, I had an idea to make it more turn based, and we were off making it happen.

In Fall of 2012 we had a build with our character Brad fighting three Ugly Johns. We built all of the hooks -- enemies took turns, avoided bunching up with each other, moved around the player, and the space nicely, and the flow of the fights felt good, so we decided to go forward with it. 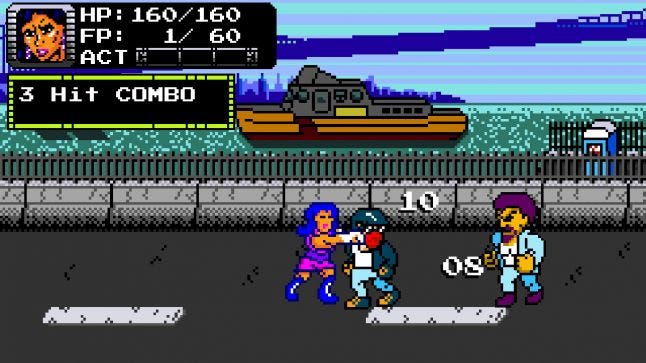 Treachery in Beatdown City owes a lot to Double Dragon and other specific arcade/NES-era titles. What was your philosophy for preserving design choices from these classic games versus updating them for modern sensibilities?

I think it owes a lot in theory to these games. Like, our aesthetics are inspired directly by Bad Dudes, Ninja Gaiden, Teenage Mutant Ninja Turtles, and Double Dragon on the NES, specifically (not the arcade versions). Final Fight (Arcade, and Mighty (NES)) is also a big inspiration.

But the design choices I focused on preserving were a bit more theoretical in nature.

In Double Dragon, if you watch the first two enemies who come up to you and do nothing, one will always try and surround you, which I thought was pretty brilliant, and it drove our goals for design, to make it feel like the enemies were always trying to surround you.

We studied a lot of overworlds for games before deciding on how to best implement our node based system, which was built to give players the most direct path forward, which is also a key design philosophy in beat ‘em ups - always go forward, path deviations should be kept to a minimum.

In general I think I tried to design more with the concept that beat ‘em ups were going for design wise, and less focusing on specific elements to lift.

TiBC is more directly influenced, from a gameplay standpoint, from Hybrid Heaven, Fallout 3, and Fire Pro Wrestling. But this is always to enhance the fighting system, and make it live up to what fighting lots of people with your fists should be like.

You’ve given a few talks over the years about cinematic and artistic influences, and how game developers can take advantage of them. Can you discuss the ones that informed Treachery?

Our intro theme was inspired at least in concept, by a slowed down version of the Escape from New York theme.

Graffiti and tagging is everywhere, so much so that Kickstarter backers got to make their mark on the world by adding their poster "bill" or I’d design some graffiti for them.

I love dirty New York movies, like Midnight Cowboy, Teenage Mutant Ninja Turtles, and Mean Streets, and those greatly influenced the game’s tone (and there’s an “I’m walking here!” reference in there.)

Bruce Lee movies, and the social justice element of his themes (like fighting people who are anti-Chinese, in Chinese Connection) both directly and indirectly influenced the game. Bruce Lee movies influenced Yoshihisa Kishimoto, creator of Double Dragon, and that “dirty fighting” he pioneered inspired our game. 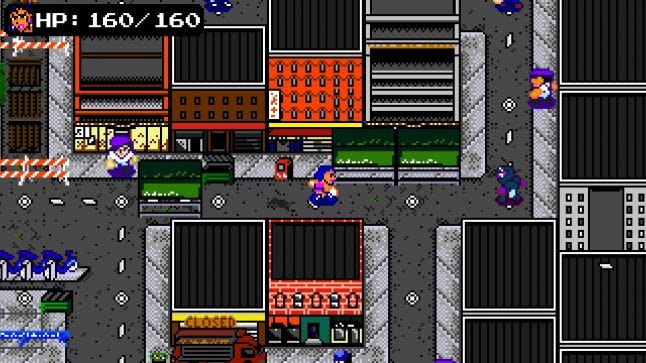 What was your approach for managing the game’s RPG economy (experience, money, items) as a small/solo developer?

We don’t have money, or "experience" -- players level up at the end of maps, and gain new moves in "Grudge fights," which are not something you can skip.

Part of why we did this is we didn’t want to inundate the player with the need to grind, which Michael Brough (868 HACK, etc.) referred to as being a bit sociopathic in a talk he gave at NYU several years back. Basically grinding = killing as much as you can. And since one of the game’s themes is fighting only who you need to, we kept all of that to a minimum.

Another idea is it didn’t really fit in with the design pillar -- I wanted the players to gain new moves, and learn elements of the game as they learned the moves. We gate using say, a combo and uppercut back to back by giving the player an initial limited amount of FP on the first map, and then open it up on the second map. This allowed us to give players moves, while trying to avoid having too much of a good thing. We wanted to avoid having no reason, or understanding, for using different moves.

For items, we decided to be pretty plentiful at first, giving out fewer as the game went on. But each map *should* have enough items to get you through. In general I would play fights and say -- wow, that was tough, let's add something here. We'd also put items that heal specific ailments nearby -- right before you're introduced to a knife toting bad guy, we give you bandages that heal Bleed.

Lastly, Treachery took a number of years to develop. While there’s something understandably stressful about that as a developer, what do you think worked well about keeping your design and development process consistent during this time period? Is there any experience you’d share to another developer who suddenly realized their small solo game was taking a long time to complete?

Our process wasn’t very consistent because life wasn’t consistent. We’ve had lots of reasons that have driven the project off course, most of them monetary or health related. I don’t think I was very good at leading the project years ago, and it took losing a lot in my life in 2014 to really start to understand what needed to be done to get the game out, as well as how to be a better manager. One year Nico, the programmer, had to get emergency dental work the week we were supposed to be done with some features. Inverse Phase, the musician, has had to move all over the place, and now has an RV that he has to maintain. We also have had to divert our time to assorted part time jobs, and full time day jobs which eat up a lot of time, but also keep the lights on.

The only thing I can think of to say if your game is taking a while, is shut up about it. We had a lot of press around the Kickstarter and Playstation Mobile stuff a while ago, and I realized we only had so many PR cycles left, so I stopped talking about it to press, stopped trying to get it into shows (especially because they are expensive, both dev time and money wise!) and toiled away in a newfound obscurity.

When we knew we were actually coming out in the next year or so, we reemerged, and got a lot of great press from the transformed visuals and game focus.