Design 101 is back! Today we talk about the core concept behind keeping players engaged.
Game Developer
Staff
July 07, 2015

Welcome back to Design 101. Last time we talked about how the same simple Event Structure supports thousands of great games. If you missed out any of the previous articles, you’ll be able to find the archives at the bottom of this piece.

Today we’re going to be talking about Emotional Alignment. This concept is the cornerstone of keeping players engaged in your game. There’s a lot to get into, so let’s get started.

A playtester is wandering along one of your game’s dirt roads through the countryside. Seeing a forest in the distance she decides to walk towards it, only to run smack into an invisible wall at the road’s edge.

“Seriously?” she says, “An invisible wall next to the edge of the road? Thanks for reminding me I’m in a videogame.” This makes you sigh. It’s well known that players hate invisible walls. Maybe now that level designer will listen to your objections.

An hour later the playtester is walking along a narrow bridge over a lake of boiling lava. A stalactite crashes down from the ceiling and she dodge-rolls away. The roll should have sent her tumbling off the bridge, but instead an invisible wall catches her at the bridge’s edge.

This time the player says nothing.

What’s going on? Why is an invisible wall so frustrating in one circumstance and fine in another?

The two scenarios seem similar on the surface. Neither scenario makes sense to have an invisible forcefield blocking player movement, so both should break immersion. As is common in many playtest reports, the player has misdiagnosed the real reason for her frustration.

So why is the lava bridge’s invisible wall so much less bothersome than the one at the side of the country road?

It’s because most players don’t want to plunge into lava.

The country road’s invisible wall does mess with immersion, but that’s a red herring. Its real crime is arbitrarily preventing the player from doing something she wants to do. She saw a forest and wanted to go explore it. The game has thrown up an arbitrary barrier to her desire. This creates a negative player reaction.

In the lava bridge scenario, players want to stay out of the lava. When an invisible wall catches their fall, they don’t have the same negative reaction.

To writers this probably sounds rather familiar.

Good stories feature protagonists with a strong desire to achieve their goals. They need this desire to push through all the adversity that a good Event Structure is going to throw at them. Frodo wants to end the one ring's curse enough to march into Mt. Doom. If he didn't the story would end rather quickly. 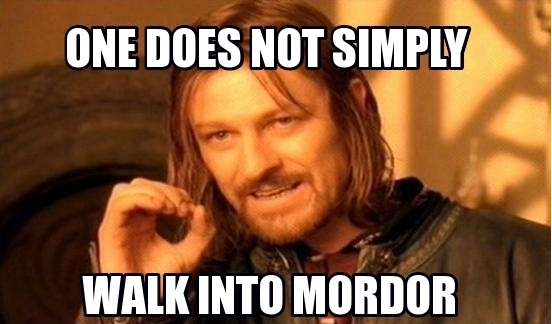 This is even more important in games. I’ve mentioned in previous articles that if movies, books and plays are forms of storytelling, then games are story living. The player doesn’t live vicariously through a Luke Skywalker on the screen, the player is the protagonist in her own story. If your players aren’t in Emotional Alignment with your game, they might stop playing entirely. At best they’ll be bored or frustrated.

Unfortunately video games have long hammered players into grudging submission. Video games have the luxury of forcing their players onto the only paths the programmers prepared. The players can grumble, but they have to accept it or quit. Consequently, many designers have spent hours on end trying to figure out why their players just aren’t “getting into the game”. In reality, it’s the game that’s pushing them away.

If you want to master Emotional Alignment, video games aren’t the place to look. For the real acid test, we turn to Dungeons and Dragons.

In Tabletop RPGs there are no invisible walls and no conversation wheel with three-to-five planned-out options. If a player wants to punch the king in the middle of a grand speech, he can do it. That could throw off the whole Dungeon Master’s plan for the evening, which is called “derailing” the adventure.

Imagine a scenario where the adventure designer wants to introduce a new villain. The designer has the villain walk into the players’ tavern and announce that he’s kidnapped someone from each of their families. He has a job he wants done, and if they do it he’ll let the captives go. Otherwise, they’ll be murdered.

This would make a compelling start to a movie. It makes a terrible start to a roleplaying game.

In a movie, we can easily understand why the heroes might keep each other from attacking the villain. There are sound and logical reasons to play along with his threat for the moment and hop on the story’s rails.

We can imagine how a video game might handle this moment. One common choice is to make the villain mysteriously immune to damage at this point, though you’ll suddenly be able to kill him in a boss fight later down the line. This is the kind of reality-break that is as unrealistic and silly as an invisible wall. I still remember emptying endless rockets into Gunther in Deus Ex, only to watch him shrug it off. Maybe he wasn’t so outdated after all.

Another common choice is to hide the villain in the safety of a cutscene. You’ll suddenly be jerked out of control of your character, the camera angle will often change, and you’ll watch yourself having a conversation with the villain. You might want to attack the villain here, but you’re suddenly not in control anymore. This is as quietly unsettling as an out-of-body experience. While it can be done well, your Emotional Alignment will get undermined if the character starts acting in a way you disagree with.

A great example of this can be found in The Blackwell Legacy, the first installment in the Blackwell adventure game series. This is what creator Dave Gilbert had to say:

“There was a key moment in the first Blackwell game where Rosa needs to speak to a woman named Nishanthi. Nishanthi is in the park, playing her flute in front of a crowd of onlookers. A normal person would just walk up to her and say 'Excuse me' but Rosa is too shy to approach her in front of a crowd. Instead, you have to solve a puzzle in order to draw Nishanthi away from the crowd so Rosa is comfortable enough to talk to her.

As a character study, it worked. It's a natural thing for Rosa to do, and it really hammered home her sense of isolation and cemented her as a social misfit. But for a player involved in an interactive experience? It was frustrating.”

The Blackwell Legacy demonstrates why good video game writing is different from good screenwriting. While Rosa is a well written protagonist for a novel, she suffers in an interactive medium. So what are some good examples of game protagonists?

Bioware has built its reputation on powerful narratives. What are their player protagonists like? Usually they’re idealized characters with rather little depth and no true flaws. Pretty much every good character can end up liking them, falling for them or at the very least treating them as the next coming of St. Awesome. Heck, you’re literally named as the herald of the world’s Christ figure in Dragon Age 3.

Bioware protagonists are close to perfect examples of what the internet likes to call Mary Sues. To quote Wikipedia, “A Mary Sue or, in case of a male character, Gary Stu or Marty Stu is an idealized character, often but not necessarily an author insert and/or wish-fulfillment.“

In non-interactive mediums, a Mary Sue is almost always a hallmark of terrible writing. For video games, at least one company has made it the foundation of their franchises. While the companion characters are often deep, fascinating and flawed, Commander Shepard and the Warden are idealized blank slates that act on our behalf. They just happen to have considerably better zingers.

This isn’t a universal approach to good writing in games but it definitely works. It also does a good job of highlighting the core differences between games and other mediums. You can certainly create deep and flawed protagonists for your games, but you still have to find a way to ensure that the player is firmly locked in Emotional Alignment.

How do you ensure this?

Making it Happen - Motive and Opportunity