When you hear the word “coffee shop,” what pops into your mind? A cozy place where you can relax while drinking a warm cup of coffee? The initial idea of infusing that experience into a game itself came from Fahmi Hasni, Coffee Talk’s writer and game designer.

While the game designer enjoys his coffee at his favorite coffee shop almost every day, the rest of the team actually spends almost zero time at a coffee shop. So, how do they manage to pull off the mood in Coffee Talk? Here we have Andrew Jeremy, Dio Mahesa, and Fredrik Lauwrensius as part of the Coffee Talk team to answer that question.

But before we get into that, let us take a look at the studio where Coffee Talk was born, shall we? 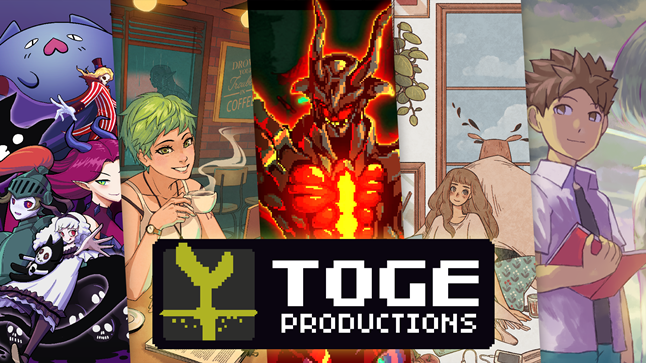 If you claim yourself a game enthusiast ever since the Flash era, you might have already heard of Toge Productions’ hit series, Infectonator. Established in 2009, this Indonesia-based indie development studio has been focusing on developing strategy games as their strong suit. With Coffee Talk, the studio decided to get out of their comfort zone and try to explore making a narrative game.

Andrew Jeremy, being one of the first to join Toge Productions, has been in charge of sound engineering and music composing for the game they have produced. In Coffee Talk, he acted as the composer and the project manager for the game. This is the first time he ever experimented with making lo-fi chill hop music, which, turns out, is loved by many.

Recently sharing his experience with the team, Coffee Talk’s lead artist Dio Mahesa also confessed that this is the first time he designed the whole art/characters for a project in anime-style - he himself is more known for his semi-realistic-styled drawings. Familiarizing himself with the new style sure was challenging, but he is happy with what he has achieved.

Last but not least, we have the youngest member in the studio, Fredrik Lauwrensius, whose role is the lead programmer of Coffee Talk. Having joined Toge Productions in 2017, he first started as a programmer in the production of Infectonator 3: Apocalypse. Coffee Talk is the very first project that he has handled from the very beginning.

The whole design of Coffee Talk itself is based on simplicity and comfort. However, it’s not that simple to make things look ‘simple.’ If anything, it takes effort and lots of revisions and great attention to detail. 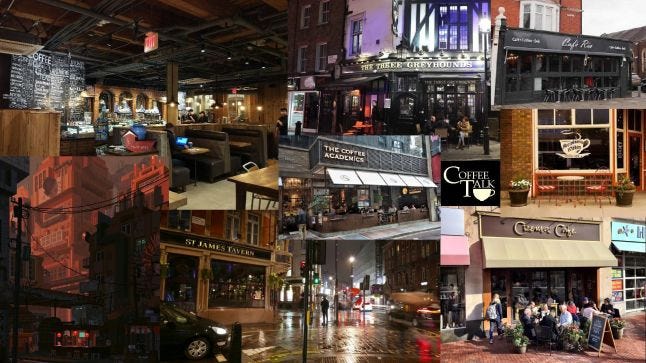 Even though the place is set in Seattle, none of the people in Toge Productions have ever lived there. Therefore, doing research was the top priority before settling on anything -- starting from sneaking a look through Google Maps satellites, searching for pictures of coffee shops in Seattle and its surroundings, and even videos.

A glimpse of the ‘world’ through the café windows

People like to occasionally stare in windows. In Coffee Talk, we want players to be able to experience that sense of escapism by looking at the environment surrounding the place through the café windows. 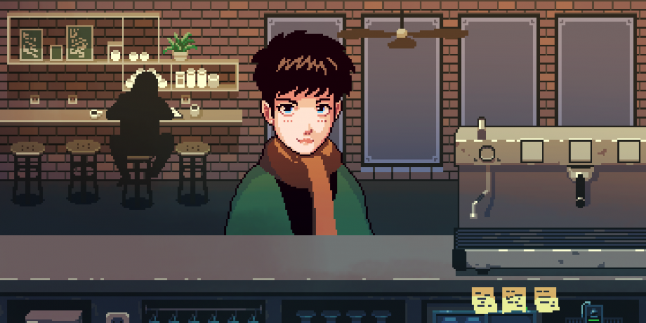 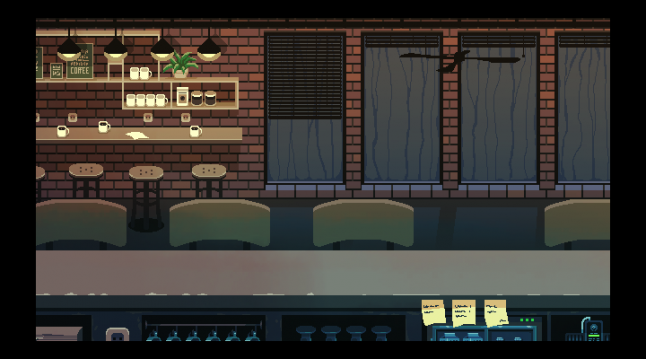 After: Make it rain!

Some find peace on rainy days. It’s even better if we have a place to keep ourselves dry and comfortable. So, the rain was the first thing we added to the environment. In the development, Fredrik, as the programmer, has to keep in mind the intensity of the raindrops falling so as not to make it too little or even too much, even though it could change as the day changes in the game.

The next detail added was the passerby, which, if you look closely, have their own distinct fantasy-race characteristics. It is to remind the players that the game is set in an alternate universe where fantasy races live together with humans in the world that we know today.

Other than those, we can also see cars passing by quite a few times, which requires lights and reflections! As we can see from photos and illustrations, the blurry reflections on a wet road help build a realistic image of a rainy night. We got it from the neon signs and car lights, plus the sound effects, of course.

All in all, we want the little details to make a huge impact on building the in-game ambiance.

Aside from that, a coffee shop wouldn’t be perfect without nice, relaxing music playing in the background, wouldn’t you agree? It’s a place where we want to chill, after all. In composing music for Coffee Talk, Andrew was inspired by the popular genre of lo-fi hip hop music. 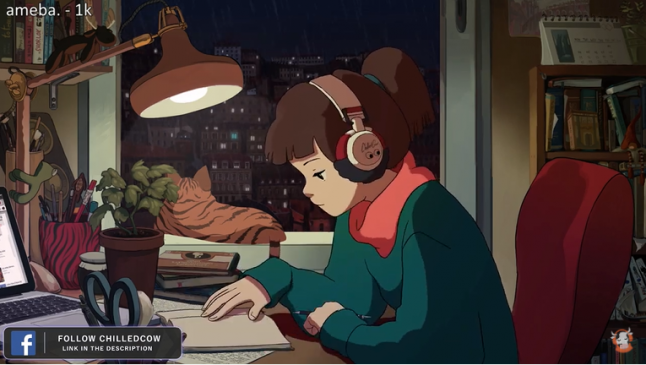 Lo-fi, or low fidelity, despite being translated as ‘imperfection’ in music recording/producing, becomes an aesthetic which is liked by many. The little-but-frequent noises we found in the music creates a nostalgic vibe with a calming effect. According to Andrew, Coffee Talk’s music itself is composed by sticking to the main core of a jazz chill-hop style music.

How does he find the perfect blend of lo-fi music and café vibe? As many cafés tend to use jazz music, listening to many types of jazz is the key. It is important to understand how the music works in order to give the listener a café-relaxing experience.

When mixing the arrangements of jazz music, Andrew used a particular method of lo-fi chill-hop mixing processes. It is, among others, adding compressions, low fidelity EQ, and even vinyl crackles for some tracks, and other things necessary for making lo-fi jazz hop music.

See what the barista is brewing

Now that we are already sitting in a café and vibing with the music, don’t forget to order something!

In Coffee Talk, we don’t want you to just serve drinks to people and go. Just like in a coffee shop where you can see what your barista is making, here we want you to enjoy the process of brewing drinks by inserting a little bit of storytelling into it.

As you can see, there are several ingredients that you can pick to make a drink. You will have to choose the base, primary, and secondary ingredients. After you are set, a sequence of images of the brewing process pops up so that you can feel the progression. Making different drinks will show different images, of course. The inspiration for this came from Papers, Please a puzzle simulation game created by indie developer Lucas Pope. 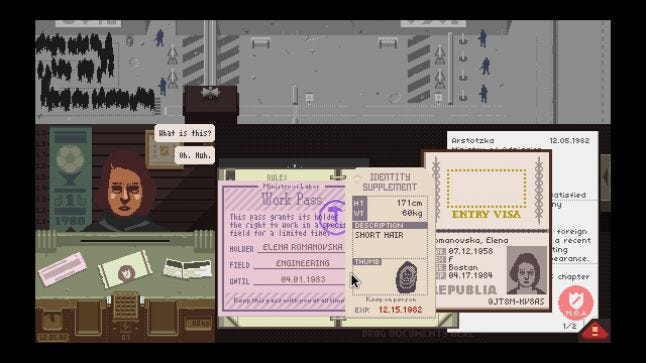 We feel like adding a sense of progression to the brewing process is necessary for the players to develop a feeling that they are the barista—as the game is a barista simulator, after all.

You are the artist and the drink is your canvas

We believe everyone knows Bob Ross and wished to be able to enjoy painting as much as he did at least once, because we do, too. In this case, we are trying to bring ‘the joy of painting’ into a cup of warm drink through the latte art feature. You can take as much time as you want when creating latte art in Coffee Talk. No rush!

Don’t worry about making mistakes, as you can improvise those happy little accidents with the tools provided and or there’s always the reset button if you want to start over.

When developing this feature, the programmers first had to think about what the players could do in making latte art, such as pouring milk and etching. Later on, after watching dozens of latte art videos on Youtube, they began to tweak the milk’s fluid consistency to make it as close as the real latte art-making experience. After all, we wanted this feature to serve as a medium to realize the players’ barista-fantasy as well. 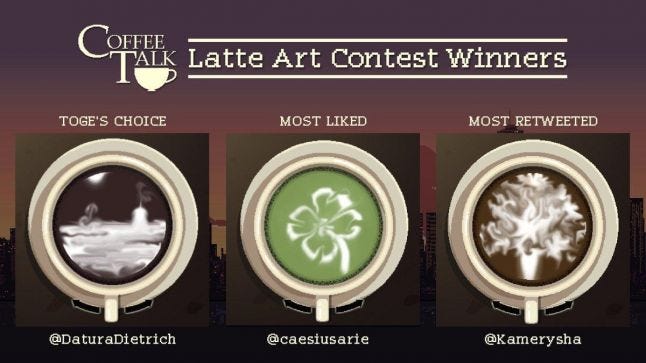 It was essential that, in making a design process for the overall aspects of Coffee Talk, to stick with the core idea of creating a calm and comfortable environment for the players. Starting from setting a mood board as the bible, to delivering a satisfactory UX/UI by combining a suitable art and sound for this particular game.

The barista simulator is what makes Coffee Talk different from the other visual novels. That’s why the team put an extra effort into developing the brewing and latte art mechanics. There were a lot of changes happening in the process, but they had to be able to adapt to it. For example, the latte art feature almost got cut from the game. However, in the end, they decided to continue to work on it so as to make Coffee Talk fun and enjoyable as a game, and a calm, soothing place to hang out like in a real coffee shop.