Creating conversations from card game mechanics in Signs of the Sojourner

"Our hope is that while playing, folks will consider who they want to build relationships with, and how, and why, rather than the equivalent of blasting through every branch in a dialogue tree."
Alissa McAloon
Editor-in-Chief
June 28, 2021

Signs of the Sojourner is a card game of conversations as the player explores a new world and meets the people within it. There's no going back from whatever you say, though, so players will need to think before they speak.

Gamasutra spoke with the team at Echodog Games about the Excellence in Design-nominated title, learning about what thoughts went into turning conversation into a card game, creating a narrative that continued no matter how your chats went, and capturing the finality that comes when the words leave your mouth while speaking to someone.

Who are you, and what was your role in developing Signs of the Sojourner?

Kattan-Wright: Following a design internship and a QA gig, I started off working on MMOs at Nickelodeon for several years. I eventually moved into mobile games, where I met Holly and Zach. A few years after that we got back together for our first indie endeavor!

Rothrock: After I got my Fine Arts degree, I started my first industry job at an educational games company, 1st Playable Productions. I took a break and did animation work for a while, but games kept calling me back! I met Zach and Dyala making mobile games. Eventually, I left that company for a contract with Giant Sparrow to help finish What Remains of Edith Finch. Then, I worked a slew of other contracts until I began working at WayForward. I really enjoyed WF, but Dyala’s indie-call-to-action was too good to pass up! 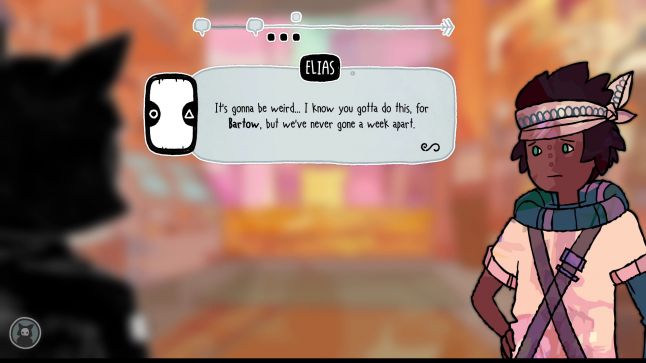 How did you come up with the concept for Signs of the Sojourner?

Kattan-Wright: I had been thinking of ways to explore conversations in games that didn't rely on dialogue trees for some time, or "dialogue as gameplay". Eventually, I landed on cards and deckbuilding as a way to represent your character rather than your combat abilities and the like. The lack of perfect control over what cards you might draw and be able to play felt like a good fit for the lack of perfect control you have over your emotional state and how others understand you or interpret what you do and say.

The themes of travel and finding or returning home, for me, started with considering my own family's history as refugees and then immigrants. Once the three of us dove more into it, though, we found a lot of common experiences in our own lives of traveling for education or work, of both moving to new cities and countries and having to adapt, and then returning home having been changed by those experiences. And finally we also wanted to establish a setting that would allow us to at least briefly explore other issues that were important to us without blowing the scope out of control.

Signs of the Sojourner was built in Unity, and we used Inkle's Ink scripting language for all of the writing in the game. Holly used Photoshop, and of course things like Google, Git, and other free programs like realtimeboard (now Miro I believe) for remote whiteboarding.

What interested you in exploring conversation and connecting with people with your work?

In large part, the idea came about from wanting to explore conversation and social mechanics outside of dialogue trees, especially in a context that isn't about defeating enemies. Part of that meant a game where there is no losing, where the systems encourage you to reflect on your own experiences, and that has high stakes that aren't about the threat of death.

We've gotten a lot of responses from people surprised that the game is emotionally challenging, but our hope is that while playing, folks will consider who they want to build relationships with, and how, and why, rather than the equivalent of blasting through every branch in a dialogue tree. Not always getting what you want or having conversations go how you plan might be frustrating, but that's also how life and social interactions work. Of course, another aspect is to still encourage that, putting yourself out there and taking those kinds of chances, trying to understand where others are coming from. 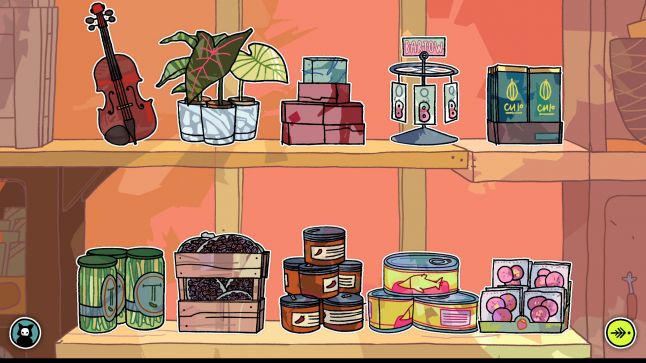 What challenges did you face in turning conversations into a card game? In creating a game around that interaction?

The biggest challenge was probably finding a way to make the conversations feel collaborative, or at least not antagonistic. Which isn't to say that we wanted to avoid conflict, but rather find a system that could ideally handle different sorts of conversations without boiling them down to a re-skinned combat system or the like. Figuring out core mechanics that actually feel like conversation, even if they're not literally modeling conversations, took a good while and a lot of iteration. Part of the challenge there was also in balancing the complexity of the systems and narrative and how they interacted, and how it's all communicated in the UI.

What thoughts went into the game's art style? How did it enhance the conversational play, do you think?

Rothrock: The game’s visual style was a journey, to be sure! I wanted it to be something that people would look at and say “I’ve never seen something like this before.” I’m primarily a 2D artist, so I indulged in pushing the flatness of the art, which played into the higher concept of the protagonist using old maps and notes left to them. I also love the intimacy of a hand-drawn aesthetic.

It started out very ornamental and had to be scaled back a lot through iteration, just like our gameplay. The game is half dialogue, half cards, all UI. I didn’t want it to feel that way, though. It needed to be as natural and casual as a conversation, but as gripping and engaging as… a conversation. I hoped, too, that the imperfect lines of the drawings would evoke the simultaneous feelings of unfamiliarity and recognition one might feel when traveling to someplace new.

The game continues to progress regardless of how the player's conversations go. What interested you in not having a 'correct' way to move forward?

In a game about conversations and connecting with people, it made sense to us that you have to live with your decisions, including mistakes or miscommunications. The idea that you aren't winning or losing conversations - that fundamentally that's not really how most conversations work - would be undermined if we literally made you lose and retry bad conversations. The cumulative effect of your conversations and relationships on how your character and deck develops is crucial to the overall experience. 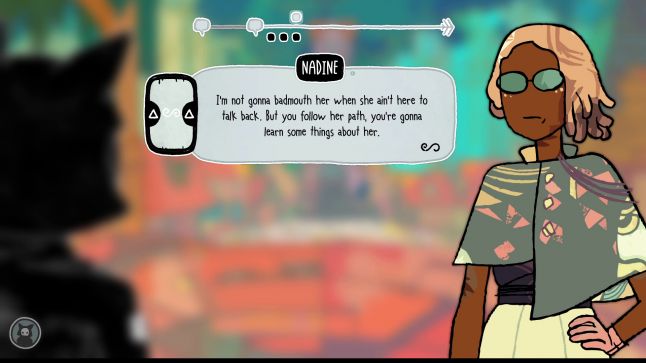 How did you design the narrative to accommodate for this ability to take the conversations in any direction? To deal with so many different conversation possibilities?

So, a nice thing about the abstract nature of how the card game plays is that, a lot of the time, players will make their own associations without us having to explicitly refer back to something they had done previously or respond to every possible card outcome and game state. There was some of that of course. Quite a lot of the conversations have alternative lines depending on how previous conversations went or other things the player may have done.

We did try to balance having far-reaching storylines with fairly self-contained ones, the latter of which helped in terms of dealing with the potentially-huge possibility space. There were plenty of ideas we had to discard though, both for scope and for it being questionable how much impact they'd actually have. For example, an early version had the outcomes directly influenced by which symbols were most played, rather than just looking at overall concordance or discordance.

There are also some areas I would have liked to explore more deeply if we'd had more time and resources. For instance, there are some conversations you may want to purposefully tank because you disagree with the sentiments the other person is sharing, but I'm not sure that was well understood in all the cases. It could have been interesting to explore how disagreement through concordance vs discordance could suggest very different narratives and relationships. Needless to say, though, there was already a huge amount to deal with both in terms of design and writing without piling on all the possible "what if" mechanics. Save those for another game!

What do you hope the player feels as they work through conversations with others and explore your world? What would you like them to take away from it?

We hope players find relatable experiences within the game, whether reflecting on their own travels or just social interactions in general. Be open to new experiences, take risks, and remember a conversation is never just what you're saying to someone!