Creating compelling puzzles in Rise of the Tomb Raider

Crystal Dynamics' last Tomb Raider game was a reboot in the form of a gritty and action-heavy coming-of-age story. The studio's followup, Rise of the Tomb Raider, aims to get back to the franchise's roots with a renewed emphasis on exploration.

According to Crystal Dynamics' senior designer, Jeff Wajcs, one of the team's main priorities when approaching Rise was to put the "tomb" back in Tomb Raider. They aimed to create levels that were giant, inviting, traversable puzzles.

In order to do that, Wajcs and the rest of the design team tried to pinpoint what makes for a perfect puzzle experience for players.

"For me, the perfect puzzle exists at the intersection of economy of mechanics and compelling layout," says Wajcs. "By 'economy of mechanics,' I mean that the puzzle is lean and mean, with only as many objects and mechanics as it truly needs. Each object in the puzzle needs to contribute both to the solution and the player’s understanding of the solution, and it's more economical for one object to do two things than to have two objects."

To ensure each tomb is filled with purpose, it's important to identify an overarching goal early on. That goal, or as Wajcs calls it, Lara's "Big Problem," will inform everything else about the tomb.

"For me, the perfect puzzle exists at the intersection of economy of mechanics and compelling layout."

Wajcs says there are several questions the team asked themselves to make sure that their level layout was compelling. "Is it interesting to explore? Is it interesting to look at?  Does the layout fit the puzzle like a glove, or is it squished and squashed in some places?"

Another key element of the tomb design was ensuring that Lara had a variety of unique things to clamber around on. "Different things can make a layout compelling," says Wajcs. "But in my experience, verticality and asymmetry always help."

Making it clear when players have hit a dead end

Once they've determined the form and layout of the puzzle, Wajcs and the Crystal Dynamics team set about disguising the obvious without ever overtly leading the player astray.

"I like to compare puzzles to mazes: there are a couple paths to the goals and there are a lot of dead ends," he says. "It's the designer’s job to communicate to the player when they have hit a dead end, and to encourage them forward when they are on a good path." 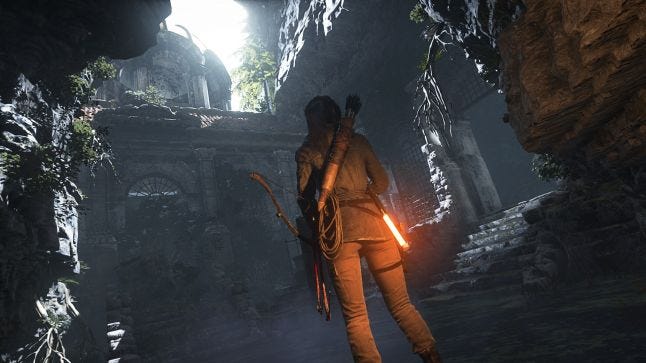 "A puzzle’s worst case scenario is when a player keeps trying something because they attribute failure to poor execution on their part."

He adds that play testing is essential to determining where those stopping points are. "A puzzle’s worst case scenario is when a player keeps trying something wrong because they attribute the failure to poor execution on their part. It's a dead end, but they don't not know it. A lot of design inaccuracies are flushed out by our play testers with no puzzle experience."

Wajcs points to one of Rise of the Tomb Raider's earlier tombs, the Ancient Cistern complex, as an example of how small tweaks here and there can completely alter the way a player engages with the environment.

"The puzzle has Lara throwing small explosives around a tomb in order to blow up various barriers, and there's also a sluice gate that affects the water level that Lara used to open by standing on a hanging platform," says Wajcs. "We had players enthusiastically throwing the explosives onto the platform because it seemed like the natural thing to do, even though it did not accomplish anything. Getting the explosives to land on the platform was also difficult, so players would spend a lot of time on it." 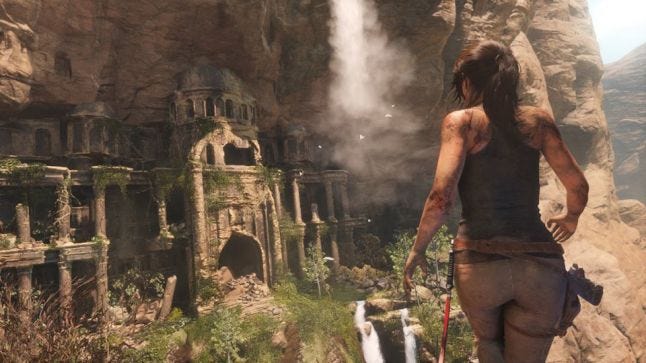 In response, they turned the platform into a simple bar that Lara could hang from. "It was a simple change that did not affect the puzzle’s solution, but it removed a very nasty dead end. A fair puzzle must be able to be completed and enjoyed by a wide spectrum of players."

"Puzzle engagement often comes down to pacing," says Wajcs. "Throwing 10 puzzle elements at a player at once will just bewilder them. It is much better to control the order in which the player learns things."

He says that one of his tricks is to make the first couple of interactions as free and easy as possible. "It's what I call the puzzle’s 'Onramp.' The player makes progress, gains some momentum to encourage them further, learns a bit about the puzzle, and, most importantly, formulates expectations for what comes next."

Most of the puzzles in Rise were engineered with simplicity in mind. "Many of our puzzles are simple on purpose, and the rest have enough different moving parts that we have plenty of ways of tuning difficulty." 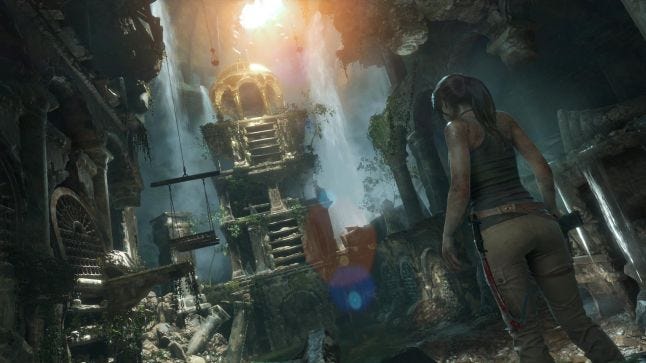 Wajcs says that keeping puzzles simple also gives the developer more control: the less complex a puzzle is, the more easily it can be adapted and fine tuned.

"A puzzle is never quite right on the first implementation," he says. "Puzzles that are too simple or too hard can always evolve towards a more balanced difficulty. That is often the biggest part of a puzzle designer’s job."