Creating A Board Game On Platform Cooperativism

How I created a board game on the theme of platform cooperativism and its difficulties, as outlined by Trebor Scholz (so an "edu" board game).
Pietro Polsinelli
Blogger
November 21, 2017

I am a videogame designer that creates applied games: I work with field experts and create (diegetically connected :-) ) games that deal with complex topics – as shown here. 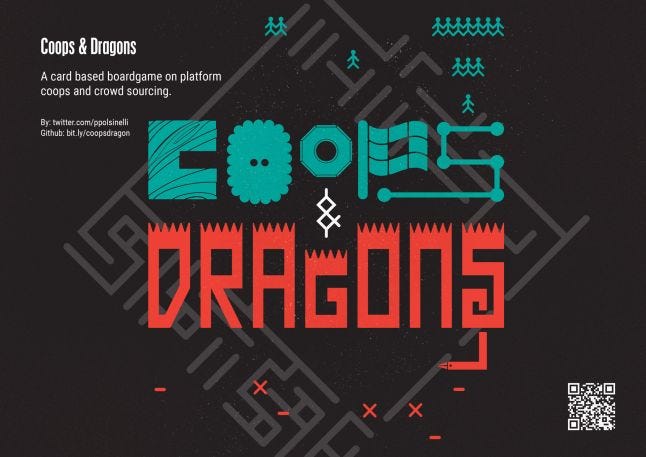 I always assumed that the skills required for video game design and those for board game design would be quite distinct, so I was a bit nervous when I started testing a board game idea that came to me after having taken part (as video game designer) in creating a project proposal on platform coops. 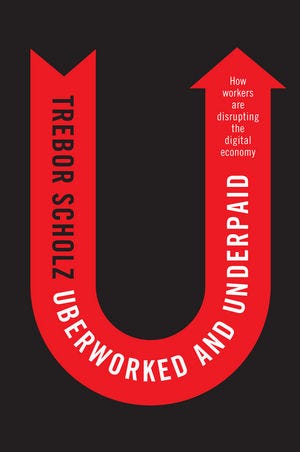 My first reference has been the book Uberworked and Underpaid: How Workers Are Disrupting the Digital Economy by Trebor Scholz. The theme is complex and only those working on the theme are aware of its relevance, so as an attempt to escape the (so common in "do good" projects) self referential trap I thought of creating a board game to make the introduction to the theme more accessible.

So I put the game together working with the amazing designer Pino Panzarella, and we created a first draft. We also put the game materials and rules on Github. 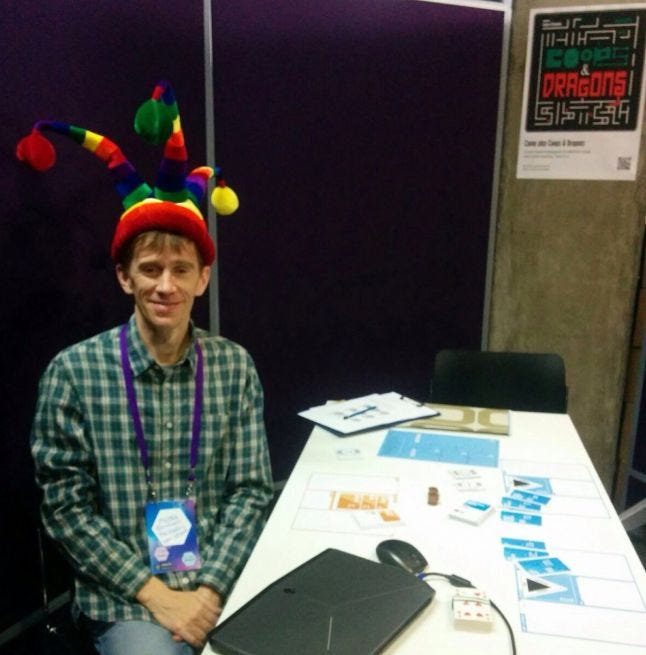 I proposed to present and play the game at MozFest 2017 and... they actually liked the game and gave me a little stipend.
So I did the first play tests, did a lot of changes, but the base mechanics was working.

As usual in applied games, you have to take the core of the specific topic, decide a mechanics and use it to extract rules from the topic at hand.
In this case I chose a role playing game where the “master” is a mega corporation (actually, three in one) and tries to economically crush the players each of whom is a (platform) cooperative. 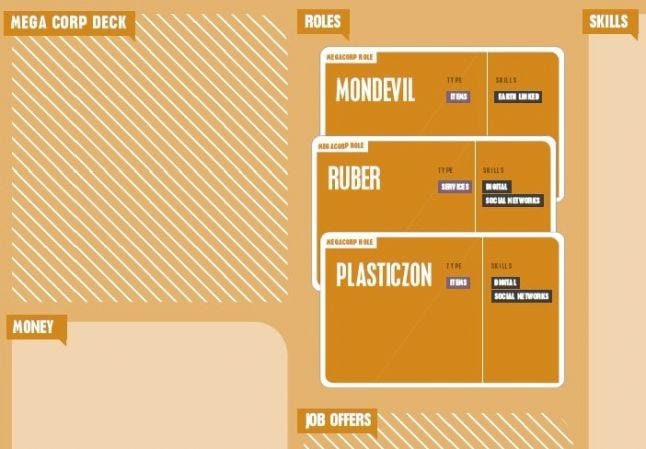 The players can decide in the gameplay to play as a team of each for him/herself.
The domain is represented through skills and both state and actions are modeled with cards.

Initially I thought of having the full game just a set of cards: so cards both represent the full state and are a way to act - inspired by Dominion.

Dominion is only made of cards.
https://boardgamegeek.com/image/461966/dominion?size=large

But given the non trivial overall game state, I soon found that giving pre-designed spatial areas where to put cards depending on their state was very practical. 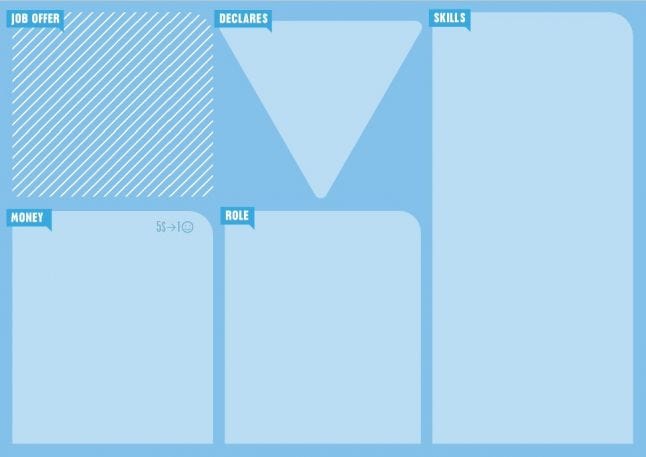 The COOP’s support board.

At MozFest I had several passionate board game players come to try it, and also two well known game designers, and they all liked it. I also had a wonderful game master, Dario Violi, to help me. 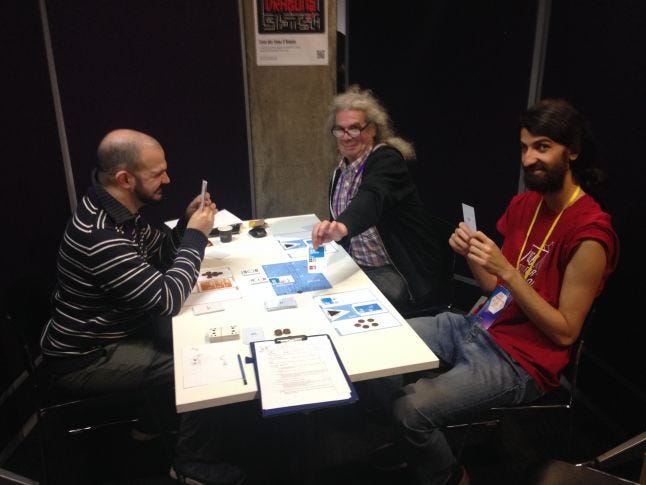 They particularly appreciated the spatial solutions for maintaining state, like:

At the last day of the festival I had people still playing at the booth when everything else was over; actually the security guys had to (kindly) throw us out :D 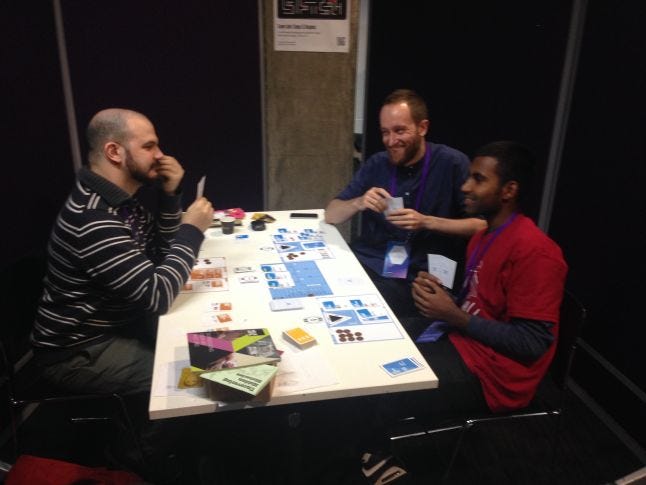 Player’s feedback was pretty amazing and we managed to revise and fix the game during the festival, improving the gameplay and causing some imbalances. I collected all suggestions and with Pino we released a new version. Some of the great ideas suggested:

Another wonderful experience was players discovering unexpected ways to use the cards, and seeing different play styles, more aggressive, defensive or cooperative.

Here is a video where I explain how to play:

What skills are common between board game and video game design? Well, usability and simplicity considerations are points in common. The fact that a game has to be compatible with limited time availability is something I considered. And a common problem with card is in checking that the combinatorial space defined is consistent and balanced, so limit the set of possible values and combinations between cards.

So? Well, it’s time to play: here is a video where I  explain how to play, and on Github you get the PDF to print in A4 format recto/verso.

A note on MozFest

I presented Coops And Dragons at “The world's leading festival for the open Internet movement”, called MozFest, organized by Mozilla, and I can indeed confirm the festival’s slug; Mozilla is the organization that for example creates the Internet Health Report. I presented my applied games at the Science Fair that starts the festival, and that was awesome with so many people coming to check my games and so much free wine provided that I got a bit messed up in the end :D

After that first evening I had my booth to check so I could take part in only a few workshops: one on democratizing artificial intelligence (I am still pondering about the ideas we collected for museum visitors...), another on cooperativism and one on storytelling .
What impressed myself and several other first time participants was the high quality level of the workshops, both in terms of the facilitators and of the participants. FEEDBACK: Somehow we didn't expect that from the online presentation (hint hint) :-)

I also had the opportunity to present the Coops And Dragons game principles in an open discussion. The service and support provided by the “space wranglers” was awesome (thanks Mark & co.). So... thank you all mozzillians and I encourage you reader to learn more about the open web movement.