Celebrating the Tutorial Design of Skullgirls

Today's post looks at how Skullgirls featured an amazing tutorial for the fighting genre and something game designers should learn from when teaching someone how to play a complicated title.
Josh Bycer
Blogger
July 21, 2015

Sometimes there are great examples of design that beg to be examined further, such as the level design in Mario Galaxy and The Binding of Isaac's replayability. For today's post I want to talk about the fighting game Skullgirls and how it featured one of the best tutorials I've ever seen from the genre and is easily the gold standard that should be copied for other titles.

The fighting game genre is unusual in the sense that while it doesn't have a huge learning curve to start, the jump from beginner to advanced is huge and is great for the competitive crowd, but a nightmare for new players.

Where the strategy genre tends to hit the player with everything at once, fighting games feature a layer of complexity that most titles of the genre rarely talk about in the tutorial or manual. Moving into advanced play requires more than just performing special moves reliably; you need to understand mechanics like zoning, punishes, attack priority and combos.

The problem with the fighting game genre is that it's next to impossible to learn the intricate details of the design through play due to the speed of combat. Most matches tend to last about three minutes or so and that's not enough time to be able to digest what is happening and learn new mechanics and tricks. You can't learn combos during the middle of the match for the same reason; in the heat of combat it's hard to commit new information to memory. Like the strategy genre, mastering competitive play is about practice, practice and practice, getting everything down before taking that to the competitive scene and other players. 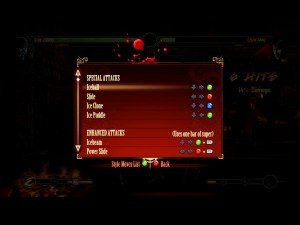 Most fighting games only teach the player the bare minimal to play the game without touching on advanced mechanics and rules.

However even the act of practicing is met by difficulty due to the lack of actual in game knowledge. The problem is that most designers treat their tutorials and guidance simply on the act of beating the game's AI and the mechanics mentioned above are overkill for the limited AI of the game.

This presents another big problem: Most fighting games only teach the player how to fight an AI and not other people.

While yes, most fighting games do have a free practice mode for players to practice moves, without any further guidance, the player will have a hard time figuring out the advanced rules and things to watch out for.

Playing Mortal Kombat X, even though the game had streamlined special moves, there was a huge gap of missing information on how the game works. Looking at the move list from the pause menu, there was no mention of where attacks hit, what special moves do or even talking about understanding attack priority and zoning. What usually ends up happening is that the players who beats the story mode will try the online play and find themselves outmatched without any idea of what to do in order to improve and will either turn to online tutorials or just quit.

That's why I wanted to talk about Skullgirls and why it should become a standard and a must play for people wanting to learn the fighting game genre.

Class is in Session:

Skullgirls was aimed at the competitive scene from the get-go with a variety of characters and advanced mechanics and rules similar to the Marvel vs. Capcom series. Because so much of the game was not only built around mastering these mechanics but the various characters, the game needed a robust tutorial.

The tutorial we got was one of the most fleshed out ones I've seen from any game in the genre and structured brilliantly to take a player through a crash course of the rules and characters. It started off with the basics that any fighting game tutorial covers: What the buttons do, how to block and grab, the meters and so on. From there things got in depth with discussions on combos, attack ranges and height, using meter and so on. This also taught the player about what attacks to use based on the enemy's position and avoiding damage.

Then the tutorial went into detail on every character in the game -- What makes them special, a breakdown of all their attacks, special moves, EX attacks and more. By the end of the character's part of the tutorial, the player is given an inside look at all the parts of how that character works while practicing their advanced combos. 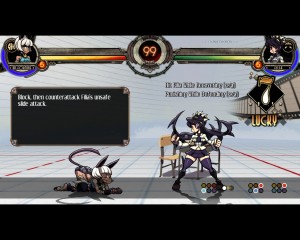 That level of detail is rarely seen in tutorials and gives the player a step by step guide into mastering the game.

This to me is the perfect way to introduce players into fighting games and I would suggest people new to the genre to play Skullgirls even just for the tutorial so that they can understand the basic fundamentals of the genre that most other games won't cover.

To summarize this for designers reading, the tutorial flow went basic controls, character specific abilities and combos and finally advanced moves that involved the tag-team system. Building the tutorial in this framework gives the player everything they need to understand the game while doing it in an order that makes sense.

If you build it, People Will Fight:

Skullgirls was an all around impressive game and for the developers to have the foresight to design such a great tutorial along with the art style and fighting system is amazing.

If you haven't checked out Skullgirls yet due to the complexity of the genre, it's one of the best games for newcomers to get into thanks to not being a part of a long established series and the amazing tutorial we talked about today.