A gaggle of designers reminisce about working on SoccerDie: Cosmic Cup for the Nintendo Switch.
Game Developer
Staff
December 03, 2019

Hi there! I’m Ken, a game designer at Pipeworks Studios. We are celebrating the Nintendo Switch eShop launch of SoccerDie: Cosmic Cup, the world’s first bullet hell soccer simulator and our very first self-published original IP! Now that it’s gone out into the world, I’ve got a bit of empty-nest syndrome. So as a part of my grieving process, I’ve gone around pestering the rest of the design team, trying to capture their thoughts and reflections around the creation and balancing of this gloriously weird little gem. 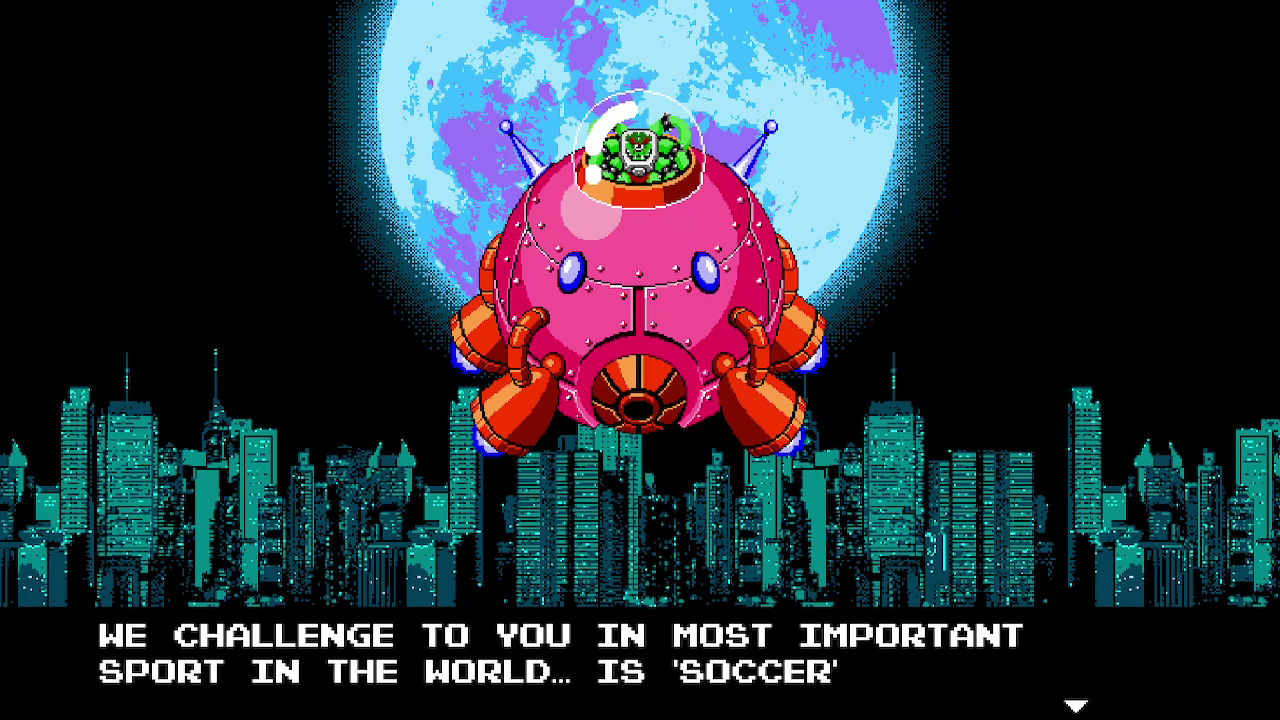 SoccerDie was initially born during an internal game jam, as the brainchild of local auteur Mark Jansen. The prototype was so much fun, we made it into a full-fledged game. The first person I talked to was Randy Lambert, who led the effort to fully realize SoccerDie during its first life as a mobile title.​

Randy is a keenly talented individual who for personal reasons lives in a beaver-like den formed of empty Jack Daniels bottles and art books. It is quite rare for anyone to spot him during daylight hours. I was able to coax him out with a few tasty imgur links and some gentle chittering.
___

What was your favorite part of working on the game?

I had a blast working on a retro parody game for ourselves instead of a client we had to convince about the subjective humor of what we were trying to pull off. That meant a very minimal turnaround time between a random brainstorm idea and actually playing with it in-game to see if it was fun or not. It felt like I was part of a scrappy indie dev team, and I loved every minute of it.

What was your top priority / goal in working on the game?

Make someone so mad and/or entertained that they hunted me down on social media to complain about the game. That was the entire thought process behind the Dracula boss fight mid-game: to send players that same retro game rage that caused a generation to regularly throw our NES controllers down on the floor and swear at the TV, but also smile while they do it.

What part of the game are you proudest of?

What's the funniest part of the game?

What's the hardest thing in the game?

A lot of people have had this experience, I think, of growing up on those 8- and 16-bit classics, loving them deeply, and then returning to them later in adulthood to just be awestruck at how gleefully weird they are -- and how uncompromisingly difficult! It’s a lot harder to get “gud” at a brutal game when you don’t have time to play in the kind of obsessive way that kids do. Revisiting titles like Contra or Gradius as an adult, if you don’t have the skills still burned into your muscle memory, these games will shred you so fast that it’s actually funny. 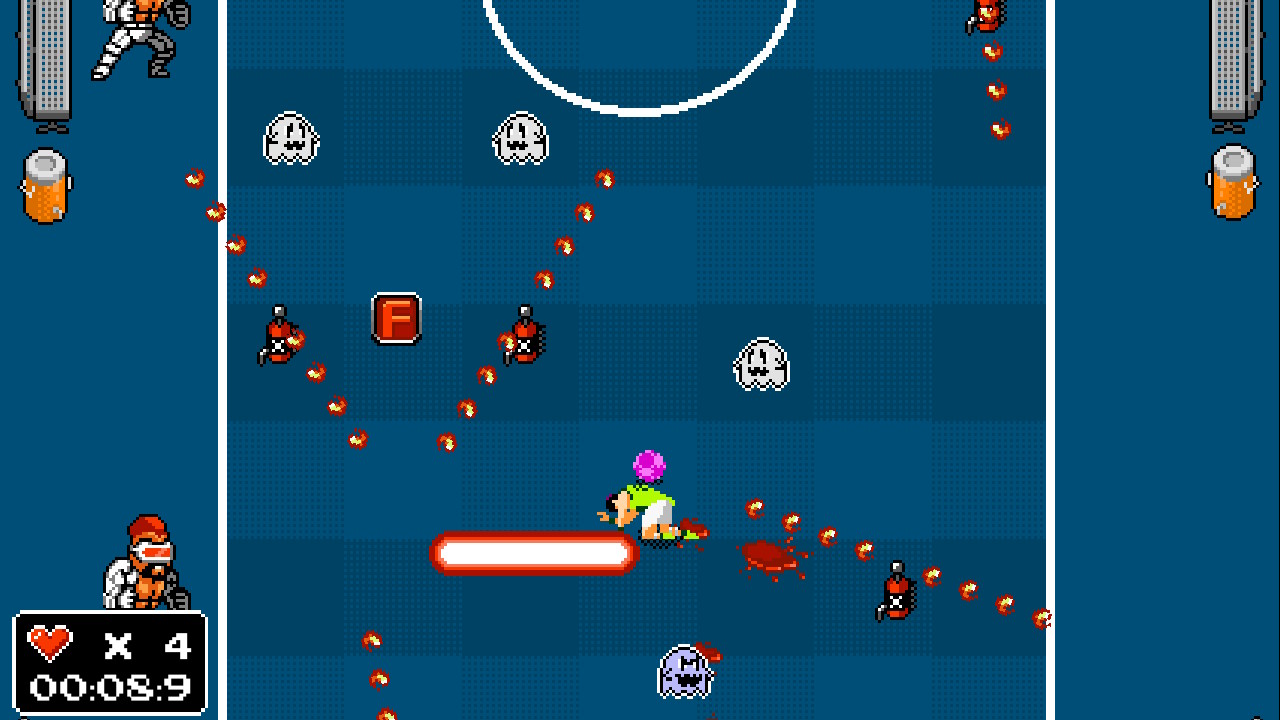 So the first versions of this game were just straight up vicious in difficulty, kind of trying to capture that bittersweet feeling of “How was I so good at these at one point in time, and now I’m dying every two seconds?” And every time we set up a station to playtest the game, it would draw a crowd and people would get really into the whole experience, cheering and raging and just laughing at all the ridiculous ways to die. In fact, we found that any time we lowered the difficulty to something sane, we got a lot less of a response from players. If they were able to navigate the playing field in only one or two tries, the game lost retention; people were happy to just walk away after a quick win.

With SoccerDie: Cosmic Cup for the Nintendo Switch, we set ourselves a specific goal: How can we make this game into something fun and approachable for casual players, but challenging enough to generate that sensation of “Just one more try, I’m gonna make it this time?”

Ex-wrestler, Twitch hero and all-around multitalent Amor Estandian bested all other contenders in ritual combat to become the lead of the SoccerDie Switch project. Under his steady tutelage, a simple mobile touch game blossomed into a full-featured console experience. His regimen is detailed below.

Controls were a cornerstone of the SoccerDie design. In a game where precise movement matters, if we couldn't execute well on controls the rest of the game would certainly suffer. It had to feel natural and offer a few styles of play. It also had to feel like players could reach a particular skill level which would be evident when playing after much practice. Tight controls meant tighter projectile paths and overall a much higher degree of difficulty. Between the sprint speed, the kick distance, and pass behavior in 2 Player, we found a control set that felt great.

Once controls were in a good place, we had to look at the levels. In the previous iteration of SoccerDie, enemies were randomized. A grouping of enemies would spawn a possible combination (among many) that provided an additional layer of difficulty. This was interesting, but this spawn system didn't give the player a chance to learn anything. This time around we wanted hazards and enemy projectiles to be predictable. We added patterns and timing that could eventually be understood by the player and feel gratifying once they figure it out. Will it still be difficult? Yes. Would the patterns and timing seem insane? Definitely.

3:  Ramping up the Difficulty

Once the levels had taken shape, we worked on creating a satisfying sense of progression in difficulty. As we tuned the feeling of the dribble and settled on what felt like a good kick distance, completing levels became much easier. On the next passes, we raised the difficulty substantially. It may feel cruel but we ensured that levels were indeed possible to clear with the right combination of skill, memorization, and timing. SoccerDie may seem punishing but once you learn how to push through a level it is quite gratifying. Once a player figures the level out, it then becomes a question of mastery. "How fast can I clear the level? Can I do it in one life? Is it possible to not get hit at all?" (Spoiler, it is possible - just stupid hard.)

The fastest person in the studio ca​n actually beat the entire game in about three minutes. Regrettably, I am not that person. But I do love playing, especially with other people. My favorite addition for the Nintendo Switch was co-op mode. 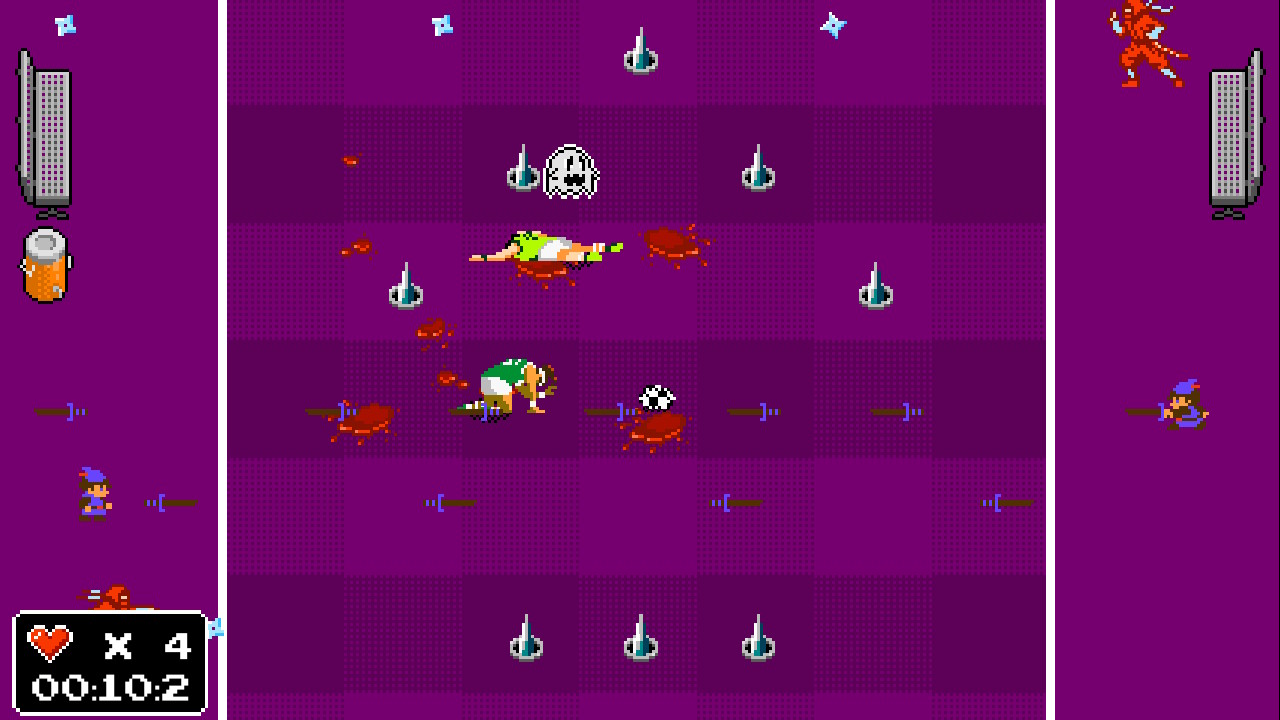 We demoed the game at Indie Game Con 2019 this year, and the best thing was watching partners and families soccering and dying out there on the soccer field, in the old couch co-op way. The humor is such a huge part of the experience that I wanted to make sure I got Ashley Flanagan’s take on things. Ash’s wit and imagination are key to the whole experience and are well-displayed in the lovingly illustrated SoccerDie manual. Following a blind hermit’s instructions to the letter, I lit a wasp-wax candle, drew a spot of blood with a bent needle, and left these with my list of questions in a small onyx basin overnight. In the morning, I had received the following design notes.
___

Funniest part of the game:

Other people generally seem to respond most strongly to “win and your planet become freedom,” but every time I get to the president saying “I’m president of space” I somehow forget I wrote that line and it makes me lose it.

Also the spikes deflating the ball, I still can’t believe that’s in there. I actually suggested it as a joke and then the rest of the team insisted on actually putting it into the game. This is how a lot of the best parts of SoccerDie happened, actually. (The “translation issues” actually became a part of the game the same way – I wrote the opening dialogue first in perfectly normal grammatical English and then did a “what it would have looked like if SoccerDie were actually a low-budget poorly-translated 80’s NES game” revision as a joke, and I honestly did not expect that when I showed the team they’d immediately and unanimously insist on using the joke version.)

What’s the hardest thing in the game?

My favorite cruelties in the game are the things that aren’t actually all that difficult but feel harder than they are. The bit where the ball starts on a mine and you have to wait for a spaceman to shoot it off is like that: it actually adds absolutely zero difficulty - the solution is literally doing nothing whatsoever for a few seconds - but it just feels like a slap in the face from the game. The spikes deflating the ball is similar: it does add real difficulty since it means the spikes threaten the ball as well as the player, but I think what’s really important about it is not how much harder it actually makes the levels but the fact that it just feels like such a dick move.

Can I say “dick move” in this interview? I feel like dick moves are an important concept to the SoccerDie design process.

Any other thoughts:
I kept this cartoon on my desktop while working on iOS SoccerDie and it was key to my whole level design philosophy:

We did our best to design the levels in such a way as to create organic surprises for the player. Part of what I love in bullet hell games is the way in which they force you to sort of get into this meditative state where you’re studying projectiles, identifying paths and making decisions - and often, when you achieve your flow, the game will throw a wrench (or a murder-ostrich. Or a ball-stealing dinosaur) at you to see how you deal with it. SoccerDie levels are much shorter than most bullet hell levels but they’re still all designed in a mischievous way. The goal is to let you get into a focused state and then mess with you a bit, either via humor or with pure challenge. I’m really proud of how it turned out, and I hope you’ll give it a shot!

Win and your planet become freedom.
___