Blending the rules of combat in The Legend of Bum-bo

Gamasutra spoke with the brains behind The Legend of Bumbo to find out how its genre-blending combat system came together.
Kris Graft
Publisher
December 30, 2019

The Legend of Bum-bo is Edmund McMillen’s latest game, and right from the get-go it’s quite different from his past work. The mind behind The Binding of Isaac, Super Meat Boy, and The End is Nigh teamed up with developer James Interactive to create a roguelike that mixes puzzles, match-three elements, and deck-building.

It takes place in The Binding of Isaac’s universe starring Bumbo, a popular character from the franchise that is now trapped inside dozens of procedurally-generated cardboard rooms. But instead of shooting their way out, players have to gather resources to either attack, heal, or defend themselves by matching at least four elements alike on a grid-based board.

Gamasutra spoke with the team to find out how this combat system came together, and exactly how much iteration it took to strike the fine balance between these different genres.

“It’s mostly a mashup of games like Puzzle Quest and Plants Vs. Zombies spun in a way that makes it feel fresh and new,” McMillen explains to Gamasutra. “I took that foundation and pushed Isaac in as much as I could as far as resources structure, theme and RNG elements”

From the beginning, the influence of McMillen’s past work makes itself clear in The Legend of Bum-bo. Gathering poo creates a defense line in one of the three main rows from where enemies slowly make their way to Bumbo. Pee, for instance, grants an extra move, while bones and teeth are used to inflict damage.

There’s also hearts that heal your character and boogers to incapacitate an enemy for one whole turn. On top of the basics, there are several Bumbos to unlock, each with their own set of skills by default, which can be triggered after gathering enough resources for each mentioned element.

Shops and casino roulettes await players after defeating the area boss, along with occasional skills to choose from in between levels. Despite everything, the game demands for strategy and patience with its turn-based pace. Interactive adds that “the mechanics came out of a lot of trial and error with trying to make a dungeon crawler and a match game [that could] give us the same feeling as Magic: The Gathering.” 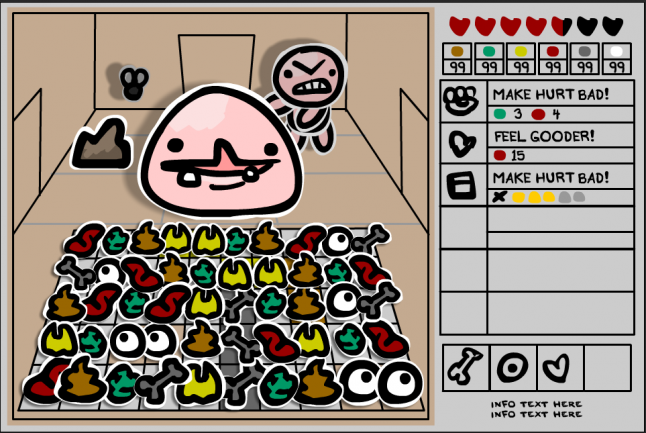 During the early days in development, the team spent 8 months working on elements that were more in pair with The Binding of Isaac, in order to offer players a break between puzzles. This included traps, NPCs, secret rooms, ambushes, and much more. But the team felt these additions bogged the game down significantly.

“It felt really counter intuitive once we had more stuff in place, and I just made a really hard call to remove it all [in order] to allow The Legend of Bum-bo to really become more of what I felt it wanted to be: a pure puzzle strategy game,” McMillen says. “I’m super happy we did it.”

For Interactive, it was a puzzle in itself to figure out how to separate everything into phases, similar to a board game. “As we went along, we had to re-engineer how turns would play out to allow room for item abilities, passive abilities, enemy actions, and general flow.”

Despite this, outside of sketches and the chosen art style, The Legend of Bum-bo didn’t undergo the board game treatment during the prototyping. According to McMillen, it did inspire him to work on Four Souls, Isaac’s card game. “In a sense, all of it was born from pen and paper. It's the first game where the design document was made 30 years prior to development,” Interactive adds.

McMillen spent almost a decade iterating and adding content to The Binding of Isaac, but having to start anew after spending so long in the same universe led to different and interesting feedback from the community.

Among its community, The Legend of Bum-bo is considered a rather accessible game, which is also becoming appealing to folks that aren’t hardcore fans of the developer’s past work. McMillen answers by saying that “I never go in aiming to appeal to anyone. I just wanted to make a puzzle game with match elements that was tied into a roguelike structure and had lots of unique item interactions to go with it... and the core mechanic happened to be a casual theme”. He adds that he considers it his most accessible game to date, but it wasn’t intentional.

From Interactive’s perspective, the game immediately appeals to a more casual audience because its mechanics come together to create a completely new experience, pushing back against the preconceptions of more experienced players. "Hardcore gamers and casual gamers are on similar ground. Casual or inexperienced players might even have a leg up since they have different expectations out of the game than someone who's played thousands of hours of The Binding of Isaac."

Back in 2015, deck-building wasn’t as present as it is now around roguelites, so the project had fewer sources of inspiration. Later on, Slay The Spire helped to make a lot of the tuning decisions, but it wasn’t until Dicey Dungeons introduced itself as one that the studio chose this subgenre. “It just seemed like the best way to sum up what we were selling,” McMillen tells us. Meanwhile, Interactive tried to stay away from similar games, but attributes the dungeon crawler aesthetics to his love for Tunnels of Doom as a kid. 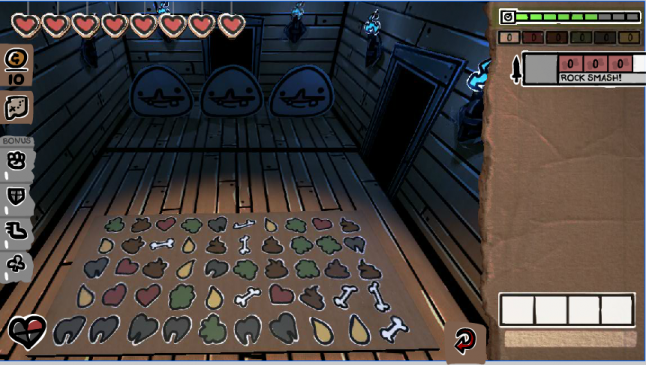 Looking at the current state of the subgenre, McMillen says that there are old designs he would like to explore in the future which bring a "random deckbuilder" element into the mix. 'This could be interesting, but if I explained how someone would beat me to it.'

The Legend of Bum-bo was a challenge due to McMillen’s own experiences as well, since it was the first time he worked on a 3D mix of strategy and puzzle. He considers the latter to be boring to make, as he’s used to developing action games that are fun within a day or two.

“Puzzle games are super hard to design mostly due to the fact that they aren't fun until every element of the design is in place. With The Legend of Bum-bo, I was kind of going in blind, but i'm extremely happy with the end product. It can feel crushing to be working on a game for months or years and not have fun testing it because not all of its pieces are connect yet. I had to just have a great deal of faith in my work to see it through, and it paid off in the end. But I was worried for a while.”

McMillen adds that his only current issue with the game is feeling like he’s only just scratching the surface with regards to what his blueprint can achieve. As such, he's interested in making DLC further down the line to try and evolve and refine the design.

“I'd like to see more games where game verbs are defamiliarized by gameplay from other game genres. I feel like it better communicates things like stats and chance than percentages, bonuses and leveling,” Interactive says, adding that he’s glad to have helped McMillen to try something he probably wouldn’t have done without him.

“If you thought action roguelites were a nightmare to get right, try deckbuilding puzzle roguelites. It's like the Dark Souls of video game development. Do kids even say that anymore?”