Behind the Jackie Chan-inspired combat of Bloodroots

"In [Chan's] movies, he uses everything around him. He'll put his foot in a pot and smash it on someone's head and then grab a ladder and spin it. We wanted to capture that feeling of going from enemy to enemy."
Phill Cameron
Blogger
March 03, 2020

Raph Toulouse called his first project, Fat Mask, a "designer's game." He remembers bringing it to conventions and having to explain how it worked to everyone who got in line to play it. "We wanted to make a Towerfall-like puzzler but it was so tiring showing it at events," he said, players didn't understand the concept. "The biggest question people always asked was 'how can I kill my friends?'"

Fat Mask, the first game from Montreal-based developer Paper Cult, was a major learning experience for him and cofounder Michael Emond. "It was a total commercial failure," Toulouse said. Toulouse wanted to make something easily understandable that players could pick up and jump into easily after the confusion their first game caused. He loved Hotline Miami, so he decided to work from there.

Paper Cult's next project turned into Bloodroots, a top-down brawler where almost every item in a level is a weapon. Every stage has the player improvise a murderous rampage, using everything from swords to carrots to kill a group of enemies spread out across the map. Levels are split into smaller, bite-sized pieces to keep the action moving quickly. 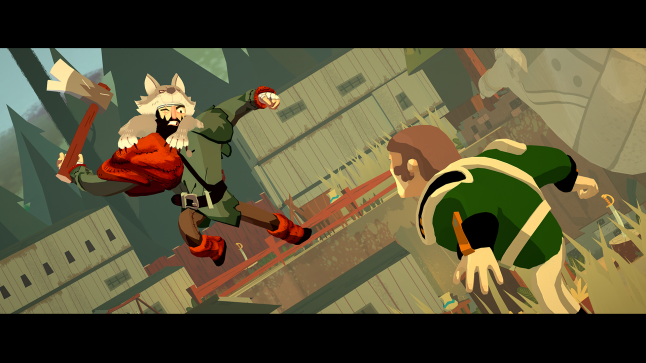 "One of the things that inspired us was Jackie Chan," Toulouse said, also citing Quentin Tarantino, Samurai Jack, and The Revenant as inspiration for the games style and setting. "In [Chan's] movies, he uses everything around him. He'll put his foot in a pot and smash it on someone's head and then grab a ladder and spin it. We wanted to capture that feeling of going from enemy to enemy."

Everything in Bloodroots was designed with these rampages in mind: weapons, levels, enemies, accessibility. The core idea was to keep players moving in whichever direction they wanted to go in.

Toulouse and his team at Paper Cult designed every item in Bloodroots with mobility and combat in mind. A boat oar is both a pole vault and a long blunt object, a sword slices through enemies and lunges you forward, and a wagon wheel can be thrown around and ridden like a skateboard. Each weapon has a durability limit, the sword and oar can kill three enemies. Some weaker weapons, like carrots and planks of wood, fall apart after one hit.

Some weapons, like a horn that summoned a stampede of boars or a drone the player could control, were cut because they stopped the flow of the action.

The goal is to keep players moving, fighting, and improvising as "the character by himself is pretty useless." Make a small mistake and you're most likely dead. The key is to always have a weapon on hand; if you don't you'll probably get overwhelmed by enemies. There are 75 unique weapons in the game alongside 75 more variations of those weapons, adding up to 150 overall ways to dispatch a small group of bandits.

While Toulouse and his team didn't have a specific approach to designing weapons, he does put them in three categories that they naturally fell into. Those categories are funny, surprising, and traversal weapons. The traversal weapons are things like the tire, which you can ride around in, the funny weapons are things like the cabbage or carrot, that players will probably just pick up for giggles. "The surprising weapon is the cannon," he said. "You hop in and think you're going to use it, but it shoots you into the air. It's like, 'what's going on.'"

The traversal weapons were designed in conjunction with the levels they inhabit, like the bear trap. "You throw it from far, it bites an enemy, it pulls you to the enemy and then throws you in the air so you can get to high levels," Toulouse said. "When you're in the air you can think about what's next. It also leaves the legs of the enemy you attack behind, you can use them as weapons."

The levels with the bear trap feature high cliffs and ledges, both of which are perfect to jump to with the height you gain. Levels with spikes require you to roll over them with a barrel and levels with gaps need you to use a sword to lunge over openings.

Toulouse wants player to think about what went wrong after they die and then make a plan to correct mistakes. Each level is designed with the main path in mind, but the mobility of the weapons lets players completely bypass those paths letting them rampage in whatever way they'd like. Have trouble fighting one particular enemy? Save them for last. "The weapons make the game more like Tony Hawk," he said. "Like a skate park where you can go anywhere and always flow back into the action."

No matter what path they choose or create, players will die many times while trying to clear each room. Bloodroots is difficult through precision. Timing is everything, players will need to line up attacks at the right moment and consider different enemy types. Some are wearing spiking metal rings, so they can be attacked with melee weapons. Others will rush in if you get too close. Hit the attack button at the wrong time and they'll bring your run to an end.

"It's a mix of Hotline Miami, a skateboarding game, and also a rhythm game," Toulouse said. "You have to hit a precise note at certain times. That's why the areas are smaller, we spent time cutting them down. We don't want the challenge to be surviving for a long time. It's supposed to be short term boosts of intensity."

Toulouse mentioned Hotline Miami a number of times during our interview and while Bloodroots does resemble Dennaton Games' top-down shooter, it has one main difference: a jump button. Bloodroots is an isometric brawler with a focus on freedom of mobility. The jump button, while tricky to design due to how imprecise it can feel, gave them much more freedom. "That's what differentiates us from Hotline Miami or Ape Out: we can jump," Toulouse said. "Bringing in the jump made the traversal weapons possible, some of them wouldn't work with the top-down view."

"We originally had a parkour system, players would hold down the trigger and you can climb and the movement," he added, saying the system was similar to Assassin's Creed. "At one point my co-designer looked at me and said we need a jump button. There's no tutorial, the parkour system added a level of complexity that wasn't needed."

Toulouse also wanted to address a lot of the shortcomings that the top-down shooter genre is known for. "Generally in this genre of game, it gets repetitive fast. We wanted to go against that. We have a ton of weapons that are spread out across the game," he said. "Most games like this focus on ranged weapons, whatever lets you shoot faster and with a bigger spread was considered an upgrade. That's not as interesting to us."

Bloodroots has ranged weapons like a shotgun that pushes you back when you shoot it, but they have limited durability like every other weapon. There is a far bigger focus on melee and switching between weapons often to match the needs of a specific stage. 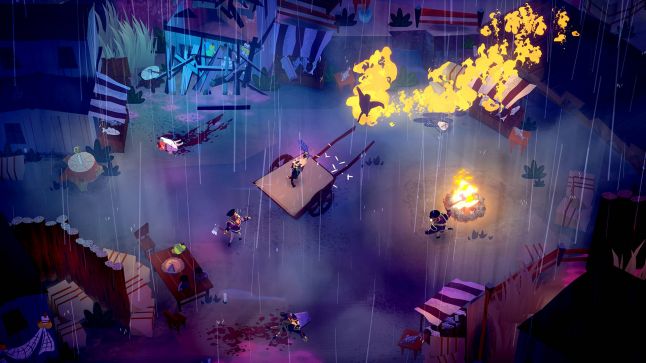 "We kind of shift the gameplay around, our boss battles are completely different minigames by themselves," Toulouse, who said his background in producing music videos helped in keeping the game fresh, said. The first boss battle has the player navigating a longer level while chasing one of the games' main enemies. Players have to keep moving like an endless runner as they kill enemies and dodge obstacles. Other levels have the player using firecrackers to fly, similar to how Donkey Kong Country: Tropical Freeze has the player tap the controls to stay afloat when riding a rocket barrel.

Paper Cult didn't want the difficulty of Bloodroots' rampages to put new players off. They liked the level-specific adjustments players could make in Celeste, but found it was too late in the development process to do something similar. Instead, they offered additional options for each level, one that eliminates every enemy in a particularly frustrating room and another that makes the player character invincible. Both let players ditch the frustration that can come with dying repeatedly.

"We also added some classic 'cheating' design choices," Toulouse said. "If you go off a ledge you can still jump for a couple of frames." They also added green targets and drop shadows under enemies so they could be easily identified.

The variety and precision of Bloodroots' rampages took over three years of polish and iteration. Paper Cult spent the first year prototyping the core experience and then went to work on building each act of the game. Once they finished a level they immediately playtested it, using heat maps to track where players struggled and went in and smoothed those areas out.

Three years of development hasn't been enough as reviewers and testers with early copies of the game are taking advantage of the freedom Bloodroots gives them. "Players are still clearing rooms in new ways," Toulouse said. "Ones we haven't been able to test."