“The Conan World is extremely diverse culturally and technologically and we wanted those aspects to be represented in a way that went beyond lore and setting.”
Simon Carless
Blogger
March 13, 2017

Building a game in the survival/crafting genre right now is a tough ask. It’s a very crowded market, particularly on Steam, and particularly in Early Access, and there are a large number of high quality titles in that crowd jockeying for players’ attention and dollars.

One tack a number of games have taken recently to distinguish themselves is by expanding their survival game with player progression, loot, or other RPG systems.

Funcom's Conan Exiles, one of the latest challengers to the throne that Minecraft built, pushes this kind of progression to the logical extreme, not only tying player’s stats -- things like strength and stamina -- to its leveling, but also locking the majority of its buildings and tools behind it.

While this sort of approach introduces a huge number of challenges around balance and tempo, it’s something the dev team wanted to include from the game’s inception, according to lead designer Oscar López Lacalle.

“We knew right from the get go that we wanted some form of vertical statistical progression, and that we wanted it to be an important part of the game,” Lacalle says. “The Conan World is extremely diverse culturally and technologically and we wanted those aspects to be represented in a way that went beyond lore and setting.” 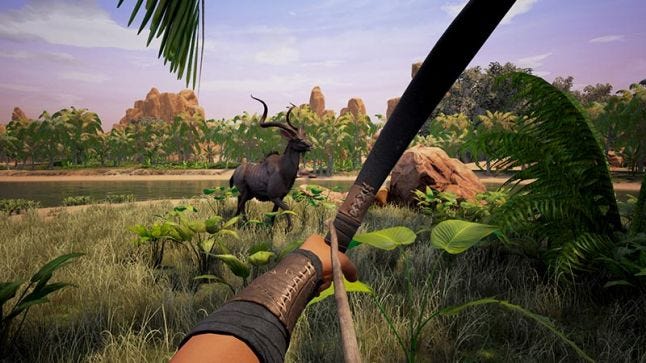 Lacalle says that a key part of their approach was to provide the opportunity for players to live a Conan fantasy in whatever way they preferred.

“Having a basic set of stats on equipment and player capabilities helps create an environment where the player grows in power over time to reach the fantasy of being a conquering barbarian," Lacalle  adds. "But the player is also able to make interesting alternative choices, like becoming a fortress architect.”

One of the earliest obstacles a developer faces when building around any kind of RPG progression is providing a challenge early on without driving players away with an impossible difficulty curve.

More than any enemy or other player, the first obstacle in Conan Exiles is the harsh environment. This puts heavy emphasis on some of the most basic craftables. “From a survival standpoint, we wanted to present the player with situations which felt almost insurmountable at first, but which eventually could be overcome and dominated," says Lacalle. 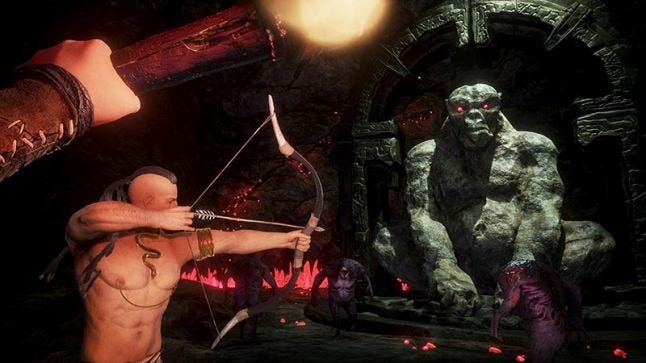 “In general, we wanted specific crafts to feel like mini-projects, and tried to always have something waiting for the player right around the corner,” says Lacalle. “We wanted this dynamic to not only encompass the basic survival genre elements of hunger, thirst and access to resources and technology, but also to include combat, equipment and the ability to build anything from a tiny shack to a fortress to a grand castle that will stand against the assault of other players.”

While the system is designed to allow for multiple builds and playstyles, it becomes clear early on that it’s impossible to master all of them. While a jack-of-all-trades character is viable in Conan Exiles, that character will trade basic competence in everything for never excelling in any one area.

The higher an attribute in Conan Exile, the more points it costs to increase it further. "It's a design that allows for specialization but presents the player with hard choices that steer them into a bare minimum set of attributes that make their characters functional all-around," says Lacalle.

"Similarly, the feat system point budget is designed so reaching higher levels gives more points than the previous levels but there are not enough feat points in the game to buy all feats.” 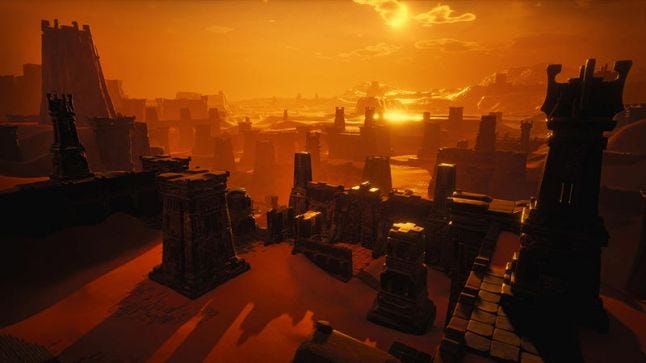 From a larger design perspective, steering players towards a focus also encourages multiplayer cooperation. “Players that play together can choose to specialize in different paths to become stronger as a group.”

He says it's worth noting that the team ended up adding a discount to the cost of many items not related with core combat or building, since they were rarely picked due to their opportunity cost. "Buying a weapon feat is about four times the cost of buying the ability to make tables and chairs,” says Lacalle.

With some core tenets about how they wanted players to be able to shape their characters, the team had to focus on how experience would be awarded, which activities would provide it, and how much each would yield. To incentivize engaging in all the game’s systems, they decided to provide XP for all the core activities. 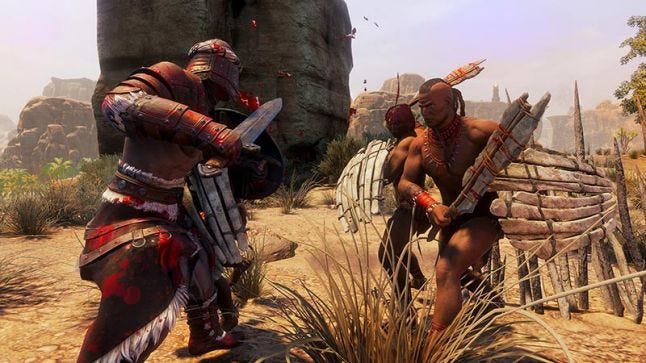 “Killing things gives you XP based on the level of challenge of the enemy. Gathering gives XP, but this XP source does not scale and quickly tapers off in favor of crafting XP. Crafting gives XP proportional to the amount of processing required to which greatly increases later on in the game; it’s low at first and extremely high for the big ticket items in the endgame.”

With the bones of progression in place, the focus shifted to matters of balance and providing a steady ramp. Lacalle says the team focused more on providing visual information rather than coddling players or ensuring they didn’t wander into areas they weren’t prepared for.

“We created a world where dangerous-looking things are dangerous, and it's up to the player to make a judgment call about their ability to deal with them. Even though the beginning of the game is relatively safe, the gloves come off once you cross north of the river. 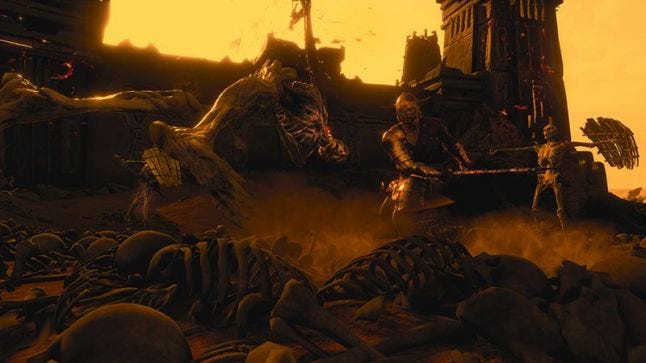 They also got rid of levels as a concept for monster power progression. "A crocodile is always a crocodile and a dragon is always a dragon," he says. "There are no easy crocodiles and hard crocodiles. If you've managed to beat a crocodile once, you're very likely to do that again. This allows players to easily identify levels of danger and emphasizes the power of gear as a progression mechanism.”

While there is no clear delineation of difficulty in the traditional sense (like zones marked out by suggested level or bridges that divide sections of differing challenge), Lacalle says that the basic idea was to turn up the heat as players ventured further north.

“Moving north from the river to the iron-rich areas is sort of a rite of passage when you are still sporting primitive stone weapons, but things ease up dramatically once you manage to make your first iron weapon," says Lacalle.

"Armor is also extremely strong stats-wise, and widens the gap between the beginning of the game and the high tiers of progression. The progression of weapons and armor run in parallel but is staggered to create more power spikes at levels 15 and 35.” 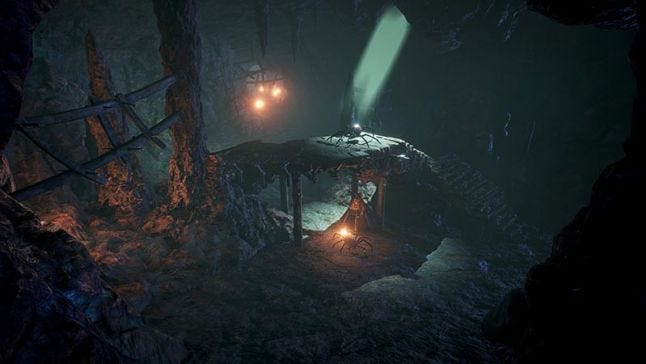 Of course, because Conan Exiles allows for multiplayer servers and unrestricted open world PvP, one of the most difficult tests for the team has been designing those interactions. Ensuring high level players feel powerful without encouraging the persistent griefing of new players is a tricky feat, but one Lacalle hopes the team has designed for.

High power players are dissuaded from inhabiting the southern areas of the map due to lack of resources and the need to repair their equipment with materials that simply don't exist in the south. Monsters in the north can damage Tier 1 buildings too, pushing players to create bases with Tier 2 and Tier 3 building pieces, which also require northern materials. "In general, high power players want to live in the north, low power players want to live in the south and everything in between is a gradient of deadliness and risk-reward,” says Lacalle.

The idea isn’t to to eliminate encounters between high and low level players completely, but to make them a natural part of the game world. “High power players can of course just go south to raid and grief people there just for fun, even if all they gain from that is blood and bitter tears," says Lacalle. "This is typical behavior in sandbox environments and in a way adds to the feeling of danger of the world itself. Raiding is as much part of the game as gathering, crafting or base building -- the threat of being raided is a major driver for creative building and the whole building progression path.” 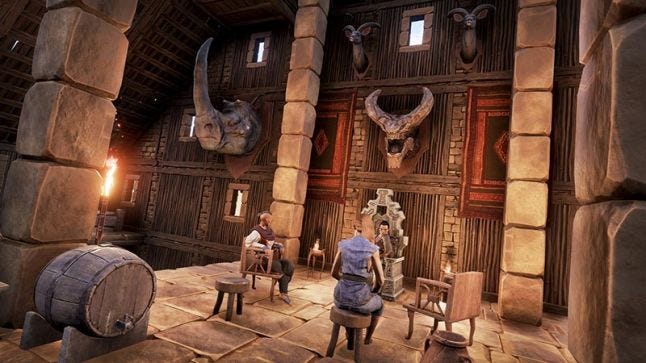 The end goal is to make PvP an incentive rather than a deterrent. “It is our goal to create an environment where people can fight and sometimes win and sometimes be defeated and have a good time all along.”

While the core progression works well, Lacalle is quick to acknowledge that there’s plenty of work that remains to be done. “We aren't likely to change a lot of stuff in the earlier levels, but we are constantly tweaking XP gains (specially crafting XP) and the XP curve.  We’re working on adding more interesting non-combat activities and looking closely at weapon and armor balance and monster difficulties.”

The team also plans to add a number of weapons to the feat tree to fill holes at higher levels, where swords are currently the only viable choice. “Since our goal is for players to be able to afford about 50% of the feats in the game, there is still plenty of room in the feat budget for new weapons, and all of them will have costs fitting with their level of power.“

Recent patches have smoothed out the feat progression and “unclogged some of the bottlenecks that existed at levels 10 and 30,” according to Lacalle, but additional work needs to be done to balance out the attributes (“Vitality and Encumbrance are a bit strong at the moment”) and expand the thrall system, which allows players to subjugate NPCs and use them as slave labor.

“Select thralls are able to craft certain high quality versions of some items once you assign them to a crafting station. Finding and keeping those highly skilled thralls is a core aspect of the thrall system that will become more important as we add more thrall recipes to the game.”

Lacalle is quick to praise the advantages of Early Access when it comes to gathering data and determining what needs tweaking or where to focus ongoing development resources.

“It is very interesting making a game through Early Access!" he insists. "Some design ideas work better than others, and it's incredibly useful to observe how players are doing. It lets you react quickly to their feedback and ideas to steer the future of the game in the right direction.”