World of Final Fantasy represents an interesting departure for a series known for dabbling in offshoots and experiments, from the deconstructed and rebuilt MMO Final Fantasy XIV to the action hybrid Type-0, to more whimsical variations like the girl band epic X-2.

World of Final Fantasy takes the series in a light-hearted direction that's intended to appeal to a younger audience without alienating longtime fans with fond memories of past entries in the franchise.

In the words of World of Final Fantasy’s director Hiroki Chiba, the venerable RPG series is a living and adaptable franchise, but one that also profits from its deep lineage.

"I believe that Final Fantasy is a title that constantly takes on new challenges, for each era," he told us in an interview. "World of Final Fantasy aims to create new experiences, but also combine it with the nostalgia built up from the 30-year history of Final Fantasy."

The developer hit upon the approach for World of Final Fantasy when art director Yasuhisa Izumisawa, who had previously worked on the Final Fantasy Crystal Chronicles series, drew tiny ‘Lilikin’ versions of Lightning and Cloud.

"Mr. Hashimoto believed it matched very well with the concept of creating a Final Fantasy that appeals to the younger generation who have drifted away from the numbered Final Fantasy titles," says Chiba. "It was then that the direction of the game was decided.”

Something old, something new

From that seed grew a core aesthetic: chibi, playful, bright with whimsy. "Achieving a balance between the cute design, and the proportions and the eye design that give the nostalgic feeling of the Nintendo Entertainment System and Super NES era, is proof of Mr. Izumisawa’s talent," says Chiba.

While the game leans heavily into the nostalgia factor, constantly introducing familiar faces and settings drawn from the Final Fantasy vault, accessible new mechanics like collecting monsters and stacking characters are likely to strike a chord with new players. 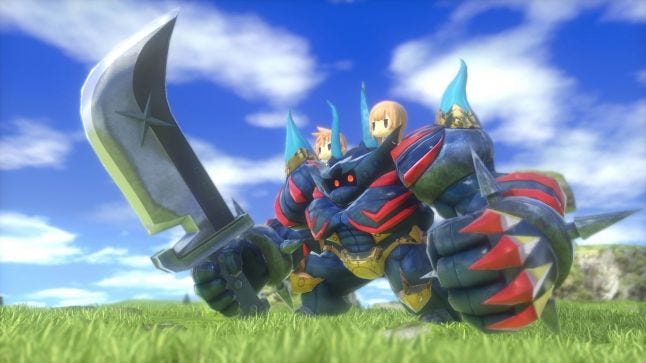 Chiba says he thought that players would enjoy the fresh perspective if the new experience took on a different direction from Final Fantasy XIV (which he says continues to evolve even now), the latest numbered title, Final Fantasy XV, or even DISSIDIA Final Fantasy (which is currently available in Japan on arcade machines).

"When you start including various elements from the 30 years of Final Fantasy, it is bound to start feeling like a festival," he adds. "I believed that I should make the mechanics and overall tone of the game fun, fit for such a festival.”

Chiba built a story around this whimsical and inviting core concept. "I started with establishing the world of Grymoire, and a new adventure involving protagonists Lann and Reyn," he says. "I built the overall structure of a brand-new Final Fantasy first." 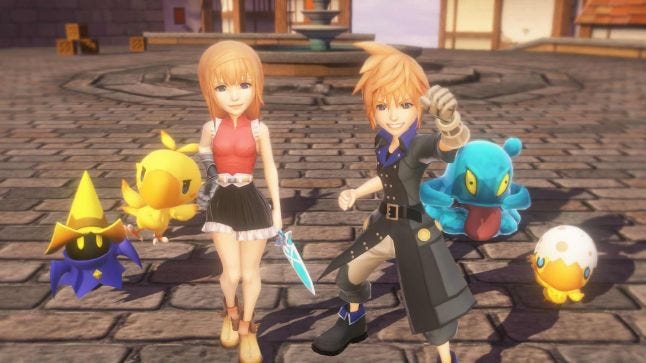 With the structure in place, he began choosing elements from previous games that would suit parts of his narrative and fit smoothly into his setting. "One clear example is, when a pirate ship was to appear at a port, the thought process was, 'Wouldn't it be perfect to have Faris from Final Fantasy V appear here? But this is a world with many Mirages [Grymoire’s monsters and animals], so maybe instead of using people as pirates, we could use moogles instead.'"

"And so," Chiba says, “instead of just choosing certain elements from previous numbered titles, or deciding what would happen based on who I wanted to appear, I went in the opposite direction. So you may see characters that have not been featured as often, and main characters that would regularly appear in games like DISSIDIA Final Fantasy may be absent."

When it came time to hammer out the primary mechanics, like combat, Chiba says he wanted a broad cross section of the many monsters that have antagonized players for years. But he wanted to avoid the same staid approach to battling monsters that earlier games in the series adopted.

"I asked myself 'Should I take such an important element as the monsters, and just make them appear for the sake of defeating them and gaining experience points?' That’s when I thought it would be much more fun if they joined the party and adventure with you together; that’s how [the monster collecting] element became what it is now." 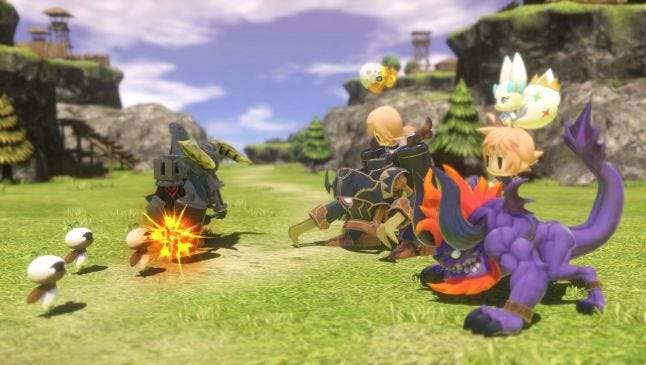 As with the story and setting, designing the combat was a careful balancing act. "Having both new and traditional elements can contradict one another at times," he concedes. "As such, I made sure to be flexible. The player can switch between 'Classic' and 'Simple' modes during battle at all times (not merging the two, but having both elements included). Therefore, we had to make sure that the game balance still held up in either mode.”

Simple mode presents players with a quick menu of limited options accessible with the face buttons, a way to get new players (or anyone more interested in the story than in the gameplay) right into the action.

Classic mode, on the other hand, presents a deeper list of actions and sub-menus that will be instantly familiar to anyone that’s played a turn-based Final Fantasy game. The game also gives players the option to fast forward or automate combat, another accessibility feature to avoid boring the players with short attention spans, and one that reduces the sensation of grinding through countless random encounters. 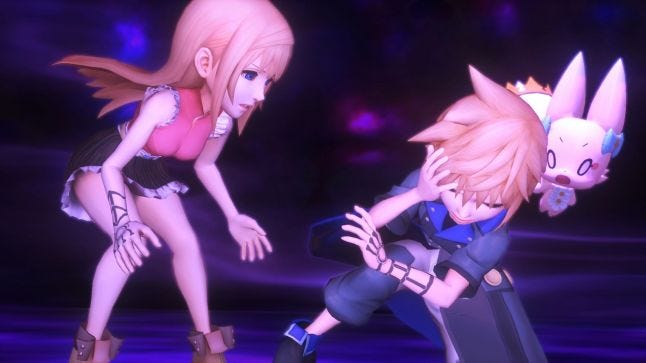 From the central themes of a celebratory festival and the challenge of creating something light and colorful that would simultaneously serve audiences both old and new, World of Final Fantasy developed organically, each of its pieces intersecting and influencing the others.

“The soundtrack, various artwork, scene cinematics, and so on were created after the scenario/script was written, and I had them build off of the story," says Chiba. "In terms of the direction of our main characters, the Lilikin folk, and the overall art direction, those were fleshed out before the scenario."

"As such, I would make sure those elements made sense within the lore, and link to the game mechanics, as I fleshed out the story and text. Each element worked together to create what we have now,” a game that manages to blend nostalgia and chibi charm while never feeling pandering or saccharine.