Angle Jungle - The Making of a Transformational Puzzle Game

Making a fun transformational game is challenging. In this article I chronicle my design process in creating an award winning transformational puzzle game about geometry, and conclude with lessons learned.
Jibran Khan
Blogger
December 28, 2017

At Carnegie Mellon's Entertainment Technology Center (ETC) multi-disciplinary teams work on projects over a semester to create an artifact. While attending the ETC I was the primary designer on the project which created Angle Jungle.

Angle Jungle is an award winning educational puzzle game for fourth to sixth graders studying geometry. At the start of development our requirements were up in the air. After discussions with our client we settled on the following objectives:

Our ideation process began with brainstorming based on the objectives of our project. We then created a number of paper prototypes. 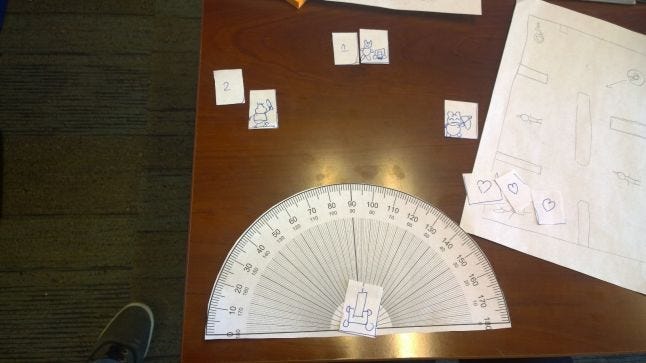 From our paper prototypes, the more successfully strains were refined based on feedback. 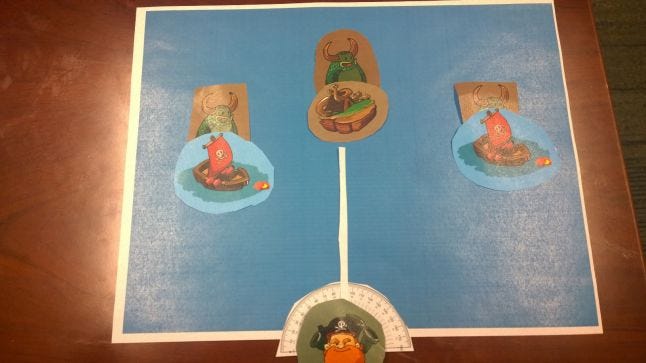 In parallel we began the process of creating digital prototypes based off these paper prototypes. 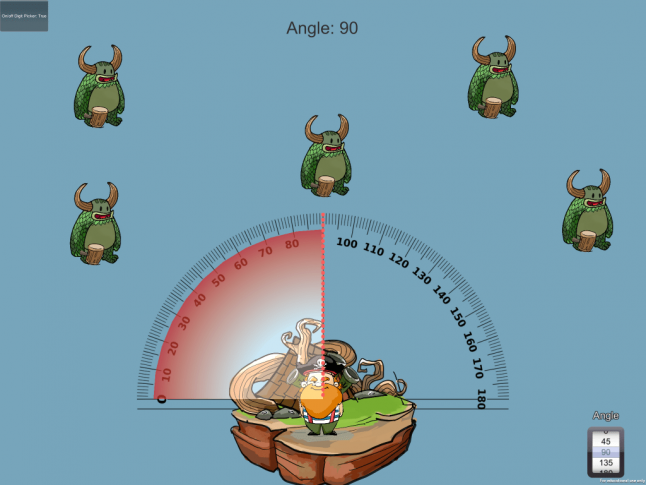 Our breakthrough moment came when Jesse Schell, a faculty member at the ETC, posed to us that though these games used angles, both could be played without thinking about angles. We needed to make an angles essential experience. This priceless notion lead us to create Angle Jungle's progenitor which we called Treasure Hunter. 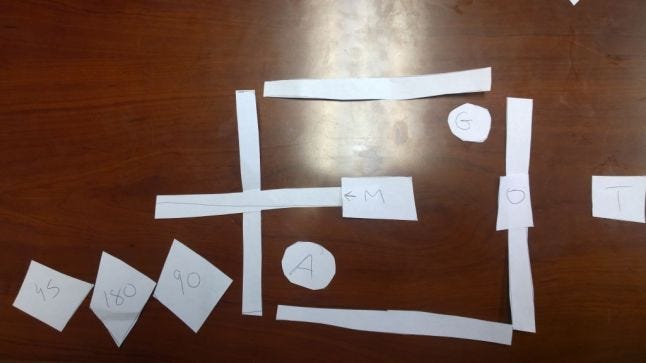 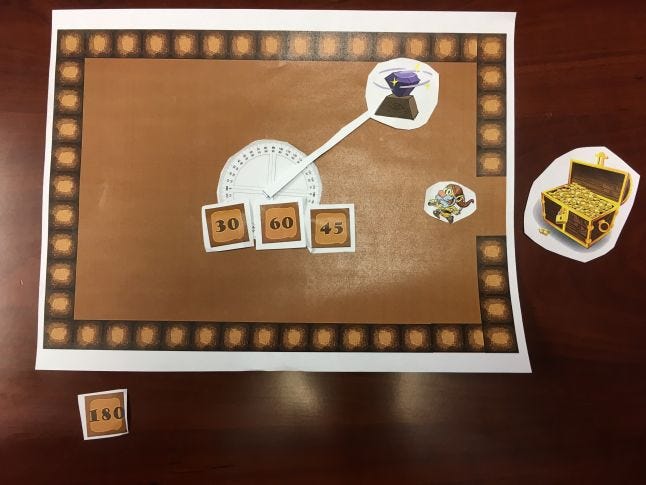 After positive feedback from playtesting we next created a digital prototype.

In the above video players slot numeric values into a beam maker which creates a spatial value. A certain spatial value is required to hit an objective to solve a puzzle and receive treasure. This digital prototype then went through many more iterations.

At this point in development we had the foundations for an experience. What was needed next was to design that experience.

How does one go about creating an experience? There are infinite ways, but we began with considering the difficulty curve within our experience.

The above graph is an abstract difficulty curve which displays a sequence of tense and release cycles of increasing difficulty. This curve would form the underlying foundation of our experience.

With an idea of what we wanted the experience to look like, next we conceptualized the elements within the greater experience. The inspiration for this process came from a number of sources including the learning materials of our target demographic.

Our aim was essentially to gamify our target demographics learning material. We would achieve this through gameplay elements which attempted to capture aspects of the kind of problems they faced in the classroom. These gameplay elements would form the core components of the experience.

Whilst conceptualizing our gameplay elements we also considered the possibility that the puzzle may not be intrinsically motivating enough for players. Therefore we created two additional supporting motivational factors.

A gender-neutral character that needed assistance (inspired by Jesse Schell's Lens of Help). Given the use of supporting characters in educational experiences is common, and there exists research on the potential beneficial effects for players. We hoped this would augment learning within our experience. 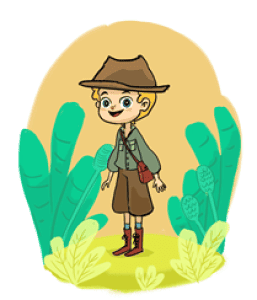 In addition we created The Cabin. The Cabin would contain rewards in the form of treasures and trophies. The Cabin would act as motivational element by creating Golden Expectations (expectation of rewards) through the aesthetic use of empty shelves as well as serve as a measure of game progress. 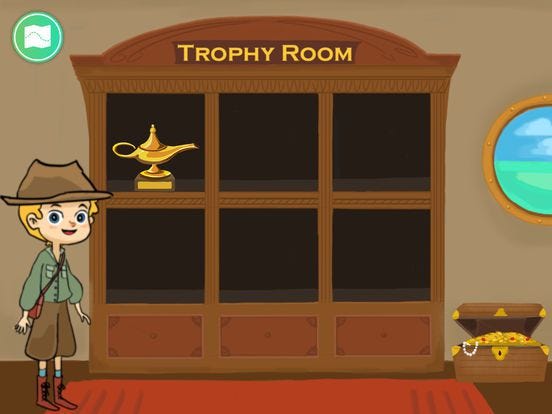 We also recognized the need to space out our rewards for better impact. We therefore arranged rewards into evenly spaced intervals.

Together these pieces could further flesh out an abstract difficulty curve of the experience. The peaks of our difficulty curve would now commonly be followed by the introduction of gameplay elements with dips being periods of rest at The Cabin.

The experience needed more though, it cried out for substance in the form of puzzle content.

With a high-level view, and the fundamental elements of the experience in mind we went about crafting a set of transformational puzzles.

This process resulted in a jumbled pile of puzzles. This was a good first step, but it did not fit the experience structure we wanted. We therefore turned to a mighty tool. The spreadsheet.

The spreadsheet consisted of columns of each gameplay element which we incrementally increased to raise puzzle complexity. This tool complemented the design process as we created more puzzles based on these new complexity constraints.

Two additional considerations came to mind during this process:

The result of this work was a structure of thirty levels which we then playtested.

Both issues were detrimental to our goal of building familiarity with the angle system. Therefore, two methods of analysis were used to solve these issues:

These methods revealed a number of such 'issue' levels.

The result of iteratively applying this analysis was that both the complexity and angle diversity was maintained and improved. This ultimately meant a better attempt at achieving our transformational goal. 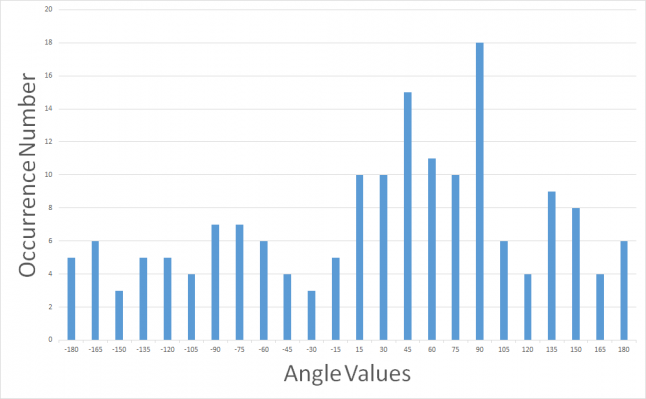 Build familiarity with the angle system by having players practice solving puzzles using a mechanic that has an encoded relationship between the numeric and spatial representations of angles.

To solve a puzzle, players had to work out the angle that was required to be made. This was difficult for some playtesters and therefore provided a natural opportunity to introduce a protractor scaffolding tool. 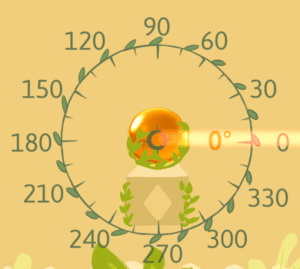 By making this tool available we built in the protractor in a manner that was of a natural clear benefit to our players. We hoped by doing so to build familiarity and appreciation of the tool by creating a puzzle environment where it was undoubtedly helpful. Playtesting showed that this strategy 'seemed' to work.

Sharon Carver - 'I especially like the meter that shows the full 360 degrees while the player is working on selecting angles.  It would definitely be worth testing the impact'

Introduce the notion of positive and negative angle values. 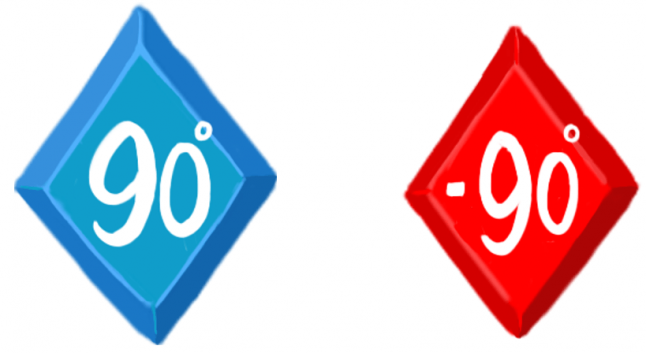 Introduce both anticlockwise and clockwise rotation, and angle addition and subtraction. 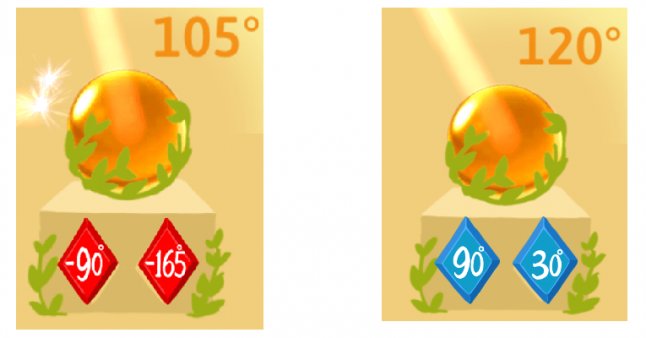 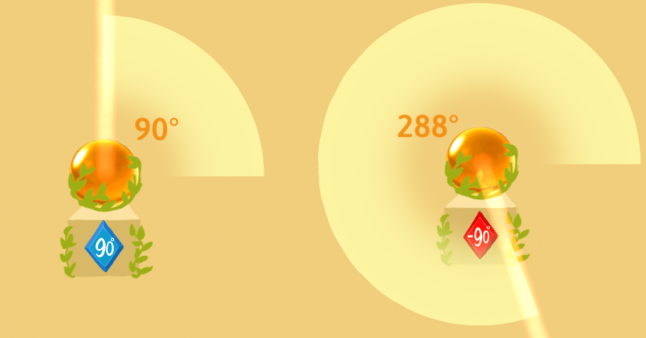 Whilst exposing students to our core mechanic (an encoding between the numeric and spatial representation of angles), initial levels would allow brute force approaches to be rewarded in order to draw in the player with easy rewards.

Allowing for such 'brute force' (choices made without solid reasoning) approaches, resulted in the following criticism being raised:

What if players are not doing the thinking you want?

In the defense of brute force, we responded with the following counter points:

Most importantly though, we admitted that when complexity was low players would not have to think 'much'. This was intentional. The experience allowed it for a deeper purpose.

We intended to combine that brute force motivation together with puzzle complexity as a transformative tool to incentivize a ‘logical’ approach. As puzzle complexity slowly increased the experience would naturally create skill appropriate ‘teachable moments’ for teachers to capitalize on.

The results of this process created an experience that contained:

This combination resulted in:

The transformational puzzle complexity in Angle Jungle can be best exemplified by the following diagram (note it dips at times of gameplay element introduction). 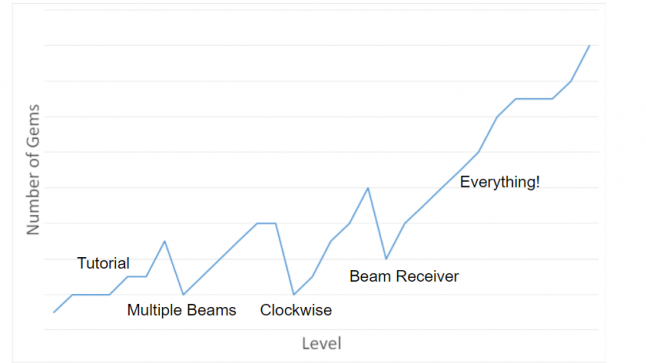 Number of Gems against Level

Well what did the games design ultimately translate into? Get a glimpse in the following promotional video (I'm happy to share raw footage on request).

So what can we take away from this experience. First some classics:

Additionally, whilst designing this educational puzzle game one question came to mind.

How can puzzles serve transformational goals?

At present my thoughts are twofold:

The process of making Angle Jungle has been a great experience for me as a designer, so I hope that sharing this process has provided some interesting, useful insights. Angle Jungle is freely available on the App Store (iPad only at present!). Please check it out and let me know what youthink!