Analyzing Death Stranding. What did Kojima want to say?

The teaser opens the first lines of William Blake's "The Divine Innocence":

After the epigraph, we are shown a coast of black sand, dotted with the bodies of marine animals. Note: from the corpses, we see thin black threads (wires?).

Traces of human hands appear on the sand, filling the black liquid a little later.
Footprints lead to the hero - Norman Reedus, whose nude body is also littered with handprints. On his hand - futuristic handcuffs. From the abdomen stretches black wire - to the baby that lies nearby. 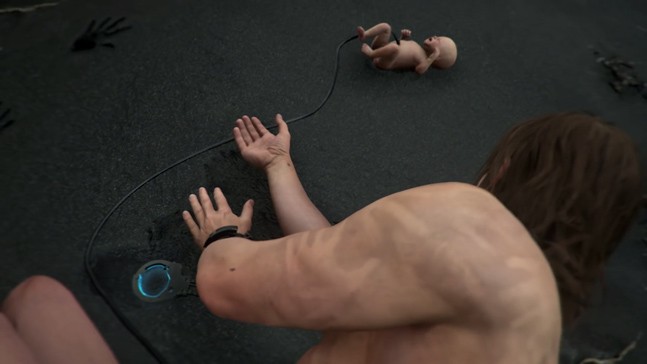 Oddities begin when the infant disappears from the hero Reedus right out of the hands. The palms of the hero are covered with black liquid, and on the foot traces of small hands appear, continuing on the sand. The hero goes on them.
When the hero gets up, we can see him better. On the neck, there is a wire with strange “death medallions” (dog tag), identifiers of military personnel.

The camera is shifting, and we see that the wire from the belly of Reedus no longer comes out. Now there is a huge scar.

Finally, we are shown the shore. Dead fish and whales everywhere. On the edges of the lava smolders, floating in the distance ice floes. Five human figures rise in the sky.
We learn what composition plays in the background: I’ll keep coming from the Low Roar group. The figures disappear. Comes the logo.

Keys
In "The Divination of Innocence," William Blake put several meanings at once. He expressed the relationship of everything in the world, condemned injustice and greed, called to see the essence of things, threatened punishment and retribution. His morals have a strong religious message (a scar in the shape of a cross?) And an apocalyptic attitude (a mass of dead animals?).

Perhaps Kojima borrowed only the first lines of Blake, leaving behind the general context of the poem. Then you can select only the motive of the relationship of things. And if you turn on the search mode of deep meaning at full power, the sand will become an allusion to the world - or even to many worlds under the hero's feet.

The place where the hero of Reedus found himself evokes several associations at once. What is it - an unsightly future? Another planet? Purgatory? Matrix? The end of "Evangelion"?

In the teaser, Reedus connections break off. Handcuffs no longer shackle his hands, the umbilical cord is replaced by a scar. He becomes a kind of transitional link between the corpses of animals and soaring human figures. What makes it different from them? The laws of physics on the neck?

The last thing to take into account is the name of the game. First of all, the words Death Stranding want to be translated as “mortal beating on the beach”, starting from the concept of “cetacean stranding” (“throwing cetaceans on the beach”). After all, this is what happens in the teaser: the mountains of the ejected whales, and the main character himself as if “thrown out” with them. But here everything is not so simple.

In itself, “throwing out” does not imply a fatal outcome, but Kojima has already clarified that the word “stranding” in the name is repelled by the second meaning, “connection”. Then we can talk about the "deadly attachment" or the "connection with death." But the verb to strand has the meaning “to break the rope,” which already has the opposite meaning. Ambivalence again.

In the meantime, new details have not surfaced, you can entertain yourself with theories - serious and comic. First of all, the teaser recalls Kojima’s relationship with Konami: they threw ashore among the dead "whales" - the games of the series, freed them from their fetters, trampled their dirty feet and took away a new brainchild. Kojima disavows such an interpretation, but almost certainly he meant it to some extent.

We soon will be able to play "Death Stranding" on PS4. We anticipate the game to release in late 2019.

And what thoughts caused a teaser for you?