An Argument for FPS Depth (or, Bring Back the Skill Gap!)

An argument for why multiplayer FPS designers need to embrace the level of gameplay depth that "flaws" in past game engines have afforded players.
Evan Newton
Blogger
January 17, 2010 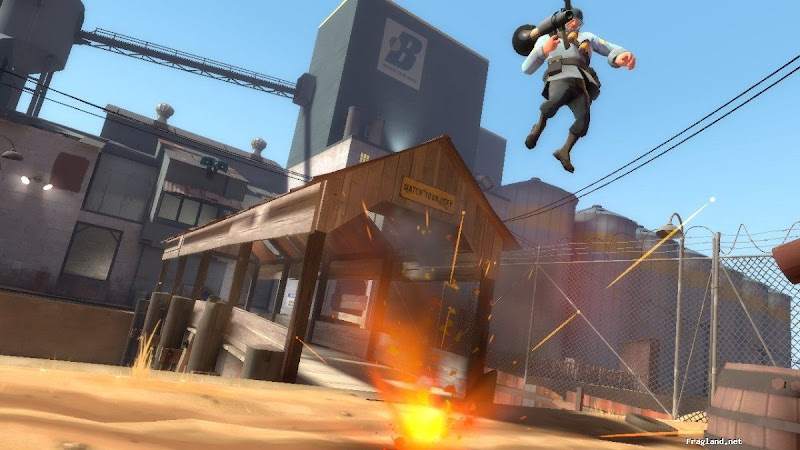 There's an aspect of First Person gaming that has largely been ignored by mainstream multiplayer developers: skill-based mechanics. More specifically, these are game mechanics that require practice and skill to master. I'm talking about Matrix-style fine control and physics manipulation that, when pulled off correctly, pushes the game to new levels of competitive depth.

The hardcore/pro gaming community refers to this as the "skill gap"--that is, the quantifiable advantage a hardcore player has over a casual player in normal gameplay (let's assume a hardcore player plays one game 7+ hours a week, and a casual player plays 1 to 2 hours tops.) The hardcore player has a better grasp of weapons, movement, and map knowledge, and should be able to reasonably beat a casual player; much like a person who practices the piano 8 to 10 hours a week would normally be able to play better than one who practices 1 to 2 hours a week. Of course, there are exceptions to this rule, but for the sake of this article...let's just assume that practiced players are generally better than unpracticed ones.

In the next several paragraphs, I'll illustrate some examples of what I am talking about, and share some personal experience--having been a professional gamer and did a stint in the development world (working on games like Call of Duty: World at War).

My first multiplayer game was the Team Fortress Mod for Quake and Quakeworld, which exploded into the one of the most popular action multiplayer games in the mid-to-late-90's. Online tournament leagues and clans were all over the place, and the level of competition was unprecedented. Team Fortress became one of the most recognized games in the history of first person shooters.

For the original TF, the Quake engine was highly flawed. It couldn't prevent people from executing physics maneuvers that severely divided the hardcore from the casual crowd. The expert player could bunny hop around play areas at speeds 10 and 20 times faster than normal. Players could use rockets and grenades to fly airborne for long distances. At the time, the engine just needed an upgrade. 3D game physics had a long way to go, and these 'flaws' were the most glaring example of why. These guys who were doing these things... They were cheating, weren't they? Who wants to play with cheaters?

ID Software improved their Quake technology and fixed the flaws. Valve did the same with successive iterations of Half-Life. Bungie did it with Halo. Infinity Ward with Call of Duty, and Epic with Gears of War. These studios did exactly what they were supposed to do: fix bugs that were causing their games to be played against intended design. From a mass-market standpoint, glitches and bugs are the great game-killer. The more a game has, the less interested the core gamer is in spending money on it. Also, nobody wants to get a reputation for building flawed games.

It is time for this viewpoint to evolve. Competitive first person gaming needs a different kind of game--one which allows dedicated players to show skills gained from hours/days/weeks of practice. Game developers should look back and learn from what the "flaws" in those old games unintentionally accomplished for the player. They delivered a remarkably deep level of gameplay possibility, and a tiered level of gameplay risk/reward structure--i.e. perform a tougher and more risky maneuver, be rewarded with better results. Fail the move, and you are left more vulnerable or are killed outright.

Example: Let's go back to Team Fortress, and Rocket-Jumping in particular. Rocket Jumping was a quirk of the Quake engine that gave players the ability to launch themselves by shooting a rocket at the ground. The advantage of the height and distance achieved often outweighed the sacrifice in health. Valve, after acquiring the struggling TF franchise, recognized this as a distinctive feature of the original QWTF and TFC, and included it in their latest game, TF2. Rocket jumping, once a glitch players used to take advantage of explosion physics, has now become a staple part of the game. Unfortunately, Valve failed to recognize and implement many other 'flaws' that would have added depth. One last point about Rocket Jumping: it isn't easy for the casual gamer. It takes practice to pull it off effectively.

Granted, "embracing flaws" would be a dramatic shift in developer mentality. Most of the time, if players are doing something that is outside of the intended design, it is labelled a bug and needs to be fixed. To be sure, there are many of these flaws that aren't fun at all, and really do force the game into such unbalance that most players would rather turn the game off. However, these kinds of glitches aren't what I'm referring to. There is a big difference between difficult moves that expand the game into new levels of playable depth (air control, rocket jumping, advanced melee, bunny hopping), and glitches that arguably take away depth--replacing it with cheap and easy (invincibility, wall hacks, leaving the map). It's important to recognize which is which.

These categories aren't mutually exclusive. In fact, the most complex FPS games find ways to force relationships between them. But the question remains: How much depth and attention do they add to those relationships?

Without depth, there is a very small learning curve for players. We get games that focus on building depth in a very narrow scope--that is, Locational Skill, Positioning, and Mind Games. These are the most passive forms of game skill which, more often than not, cause chronic camping and boring standoffs. Weapons Skill, General Movement, and Skilled Maneuvers are either over-simplified or tightly controlled. Yet this is where most developers are missing the greatest opportunity for depth. I'm not saying that developers ignore them entirely. I will be the first to point out several examples of FPS games that have very robust and complex weapon or movement lists. However, for whatever reason, most games build depth by adding more features, instead of taking the features they do have, and building nuanced complexity and versatility. The question isn't, "How many different moves/weapons do you know?" The questions are, "How many different things can you accomplish with that move or weapon, and how hard are they?" How much time and effort did these things take to learn, and how much reward does the player gain by learning them? Do they get to access areas that would not normally be possible? Do they get a chance to kill their enemy in an otherwise hopeless situation? Allow people to 'hack' their weapons by hitting buttons a certain way. Give people the ability to climb a wall or jump ten feet because they practiced it. But: Don't make it easy to do.

Hardcore players love to be rewarded for the skills they develop. Also, developers love hardcore players, or they wouldn't put so many gimmicks into the multiplayer leveling experience these days. Many would say, "What do you think rankings, medals, and levels are for?" The main goal of these gimmicks is to increase longevity of a game, giving players a reason to keep playing. This isn't what I mean. As fun and rewarding as they are, these gimmicks do not achieve depth in gameplay. Players want direct in-game results for practicing hard. They want to hit the perfect button combos to cause them to tumble through the air and land perfectly while dodging bullets because they practiced the same move a thousand times. Not only that, but adding playability depth would create another reason for players to come back to a game--if only for the bragging rights.

I know as I write this, one of the greatest arguments against this is yet unaddressed: Balancing. "If we add depth, we alienate our majority casual audience and turn them off when they get owned by flying backflip sniper headshots that they can't do themselves." Yes, this was a legitimate concern 5 or 10 years ago. However, current online matchmaking and ranking technologies make the separation of skill-leveled communities much more feasible. In general, if people want to learn how to increase in rank, let them learn to implement increasingly hard maneuvers and weapons tricks. Or as a last resort, try this: design the game to have a "casual mode" and allow players to pick a multiplayer playlist that fits their style. We do this already with "hardcore" game types in free for all or team deathmatch.

So ultimately, let's design depth into our FPS games again--but do it deliberately this time. Let's allow hardcore players to fly through the air if they can master the trick. Don't feel bad about making these tricks obscenely hard to do. Players won't mind the challenge, I assure you.

If for nothing else, gaming is becoming a spectator sport (Major League Gaming, World Cyber Games)! Let's just make it more interesting to watch!

(I found a two videos that demonstrate some of the skilled weapons maneuvers that were accomplished in Quake TF and Halo 2. These moves are tough to do, and require much practice to accomplish, but once mastered, they provided a new level of depth to gameplay.)