Super Brin will have the player throwing a ball to hit targets. That throw begins in the real world, and the properties of that throw then shift into the digital space of the game.
Chris Kerr
News Editor
February 17, 2017

Super Brin will have the player throwing a ball to hit targets, score points, and screw with their opponent. That throw begins in the real world, with players tossing the ball across Super Brin's sensors, and the properties of that throw shift into the digital space of the game.

Super Brin's sensors read a real world act and transition it into a digital result, reading the ball sliding across it and converting the player's physical action into one happening in an alternate space.

Developed by engineers and artists whose interest lies in probing the connections between players and games - between the physical action and digital result, Super Brin seeks to make a clearer bridge between the gap in the actions we take outside games to make them happen, and all through a fun throwing game with similarities to pinball.

Gamasutra reached out to the developers of Super Brin, Olivier Guillerminet and Guillaume Evrard, to talk about the experience they've created, and how players will be able to see a direct line between their own throws and the reactions in another vibrant and colorful world at the ALT.CTRL.GDC exhibit.

We are Olivier Guillerminet and Guillaume Evrard. We are engineers and artists. Olivier developed the game. Guillaume built the controller and developed the electronic parts. We are both co-founders of Studio Bruyant. 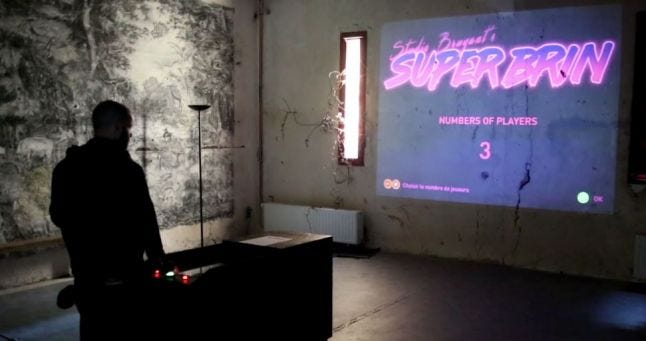 Super Brin is a device inviting the player to throw a ball. The launch is then extended in the video game, creating a mix of psychedelic pinball and futuristic bowling: aim for targets to earn points, steal points from your opponents by exploding their balls, or get all sorts of bonuses to provide additional abilities to your ball.

Studio Bruyant is an artist's collective and a company working in digital art. We work on interactive / audiovisual installations, experiences, and performances. We always try to create a link between tangible elements and digital creation and sometimes we work on projects which are based on video games.

The first project we created in this way was Octopop, an electronic concert / video game for children. Each musical track corresponded to a mini-game displayed on the screen on stage. When the musician Nit played a midi note, a game object was created (enemy, collectible etc…). Children interacted with the game with big tiles on the floor, and the games were based on one-button play. We played this show several times in France, and we're playing it in Tokyo for the Digital Choc festival and in June at Philharmonie in Paris.

In 2014 we created Chroma Perspectio for an exhibition at Gaîté Lyrique (Paris). It’s a kind of cooperative game / interactive installation. It’s a puzzle game from 1 to 4 players where each player controlling a pointer on the screen with a torf lamp. The concept is that only the fifth cursor, which is always in the center of the others, will have an effect on the game. To solve puzzles, players have to collaborate, talk to each other, and harmonize their respective viewpoints.

In 2015 we created Galop Kids, a horse race arcade game. It’s for 2 players who play on metal horses usually used to train jockeys. We made it for French hippodromes.

Super Brin is our fourth and last game project. 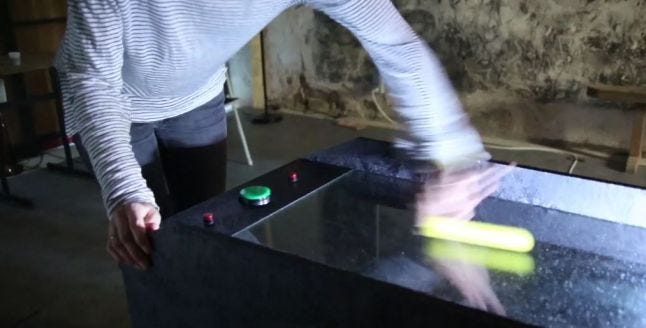 What development tools did you use to build Super Brin?

We used Unity, an Arduino, and a very cool device called PixyCam to track the ball.

The first version was made of wood, steel, glass, meccanos, and electronic parts. For GDC, we had to make it lighter, so we customized a portable ping pong table! We had to transform it to fit our needs, adding electronic parts for the ball detection, and wood parts and plexiglass to make the launch area. 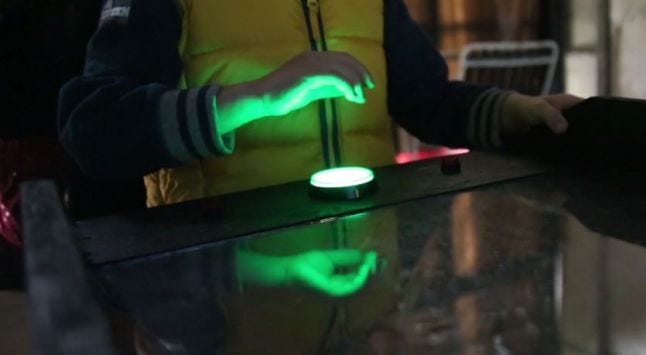 Originally we created Super Brin during an artistic residency at Lizières (France). The purpose was to reinterpret old games from Picardie (a region of France).

These old games are often based on launching a piece of wood (that can be a ball, a stick, etc.) and aiming at objects, targets, or points zones. All of these games made us think of a mix between curling, pétanque (a popular french game), pool, and pinball...

How do you feel that the physical act of throwing a ball makes the play of Super Brin special? What about this physicality draws the player into the world more than just pressing a button?

Usually, when you throw a ball or an object in a video game you do it with a gamepad, a touch screen or a device with an accelerometer, which is different than the real life. Throwing a real ball is a universal gesture you've known since you were a child. You know that you have to take care of its weight and size to achieve what you want. It’s a familiar feeling and we thought it was an interesting input for our game because everyone knows how to do it.

But we wanted to create an interesting experience, so it’s not enough to re-create something you can do in your garden. The game allows the player to trig something you can’t do in the real life (destroy everything, add funny behaviors to your ball etc…).

That’s the goal: start from a very familiar and simple gesture to provoke some unusual effects in a fantasy world. 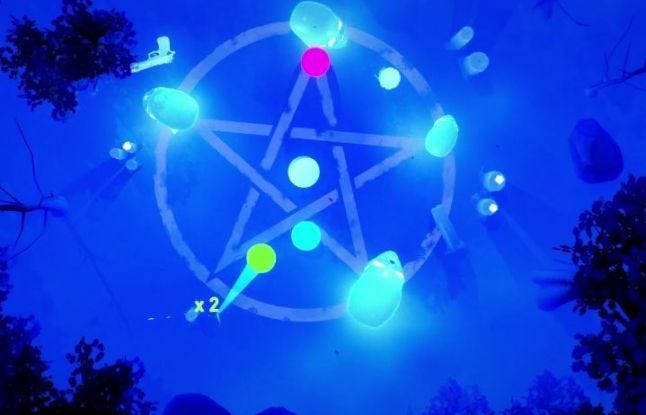 How does Super Brin capture the player's throw?

We use PixyCam, a camera which tracks the ball at high speed (60fps). Then we analyze the data to determine the direction, speed of the ball and initial in-game position.

Super Brin transitions from real world force to digital result. What drew you to create this connection with your work?

Like many other digital artists we work a lot on this link between natural actions and digital results. Another installation we made is Pm/Tchk. In it, there is no screen, but only percussive toys and a guitar. The more people there are in the room, and the more they’re moving, the more the toys make music. You just have to move. We are all used to keyboards, mice, and touch screens, and when you forget the technical part, there is a kind of magic which comes over, giving you some special skills.

For a home usage, gamepad, keyboard and mouse are still the reference in gaming controllers because gamers are used to them, they don’t need too much space, and are not too expensive. So, it won’t be easy to disrupt the mass market.