In Zombie Crawler, players become the creeping dead, using their hands on a custom designed treadmill to pull themselves toward a human victim.
Simon Carless
Blogger
February 20, 2017

Players become a the creeping dead, using their hands to pull themselves toward a lone, struggling human in Zombie Crawler. To reach them, though, they'll have to drag themselves along on a small, custom designed treadmill.

The custom treadmill allows players to pull themselves toward their prey. Not only that, but it's built to allow players to swipe by hitting buttons on the sides of the treadmill, clearing debris, or to lean to one side or another, tilting the treadmill to dodge projectiles.

Zombie Crawler is the brain child of Anders Karlsson and some fellow classmates in their game design class Uppsala University, Sweden.

Gamasutra reached out to Karlsson to talk about what brought them to reshape the treadmill for a zombie game, and how their unique controller will breathe new life into the zombie genre (so to speak) at the ALT.CTRL.GDC exhibit.

My name is Anders Karlsson and I’m the project producer. 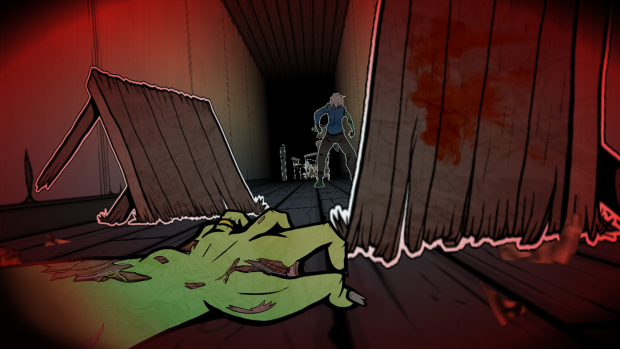 We built a treadmill-like controller for your arms, where you have to drag yourself forwards in the game by grabbing and pulling on the conveyor belt. The controller has one button on each side of the frame, when pushed the zombie will smash whatever is on the left or right side. On top of this, the entire controller can be tilted from side to sight in order to dodge incoming bullets. We really wanted our players to get into the whole idea of being a zombie.

Everyone in the group is studying Game Design at Uppsala University in Sweden right now, Zombie Crawler was our first big project that wrapped up our first year.

What development tools did you use to build Zombie Crawler?

The game is coded in Game Maker and all the assets, animations and textures were made in Photoshop. The controller was made by our own hands from scratch.

Our controller is made out of a wooden frame with a pair of aluminum pipes with integrated ball-bearings for the conveyor belt. The belt itself is made from a rough-material carpet! A pair of magnetic switches on the sides is used to sense the tilting motion of the controller and inside of it all is a mouse that register the movement of the carpet. 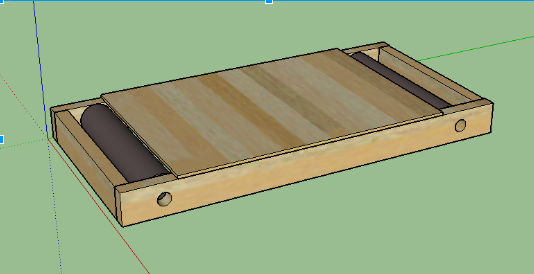 We started developing Zombie Crawler at the 28th of March 2016, by that time we had a deadline to have a finished product to present on the end of May. Since then, we have continued to work on our game whenever our studies has allowed us enough spare time. Since the first release, we have been polishing up the artwork and interface, sounds as well as re-worked parts of our controller.

Part of the course for our first year project at Uppsala University is to create a game with an unconventional controller. Creating a custom controller wasn’t a notion we were originally fond of - we were worried it was to become too much of a gimmick where the game itself is forgotten.

But then, during our brainstorming, we got into a discussion on films like Warm Bodies where the zombie is actually the protagonist. Another said as a joke: “Yeah, then we could just use a belt that we drag ourselves across the floor with!”. This was an idea that really inspired us, it felt completely right and we hope the whole zombie experience we want the player to feel in the game is translated through our controller.

What thoughts went into reshaping the treadmill for the play you had in mind for Zombie Crawler? In creating one that had attacks and dodges in mind as well as locomotion?

The controller is built from the ground up for this game specifically, so everything we wanted to add to the game needed a natural counterpart on the controller. We wanted the player to instantly just “get it” without having to look for a manual or by playing through a tutorial in the game.

What was it about the crawling action that appealed to you? Why not have a walking zombie, since you were already working with a treadmill-based idea?

We really liked the idea of the iconic crawling zombie on the floor, we wanted it to be a struggle for the zombie to reach the unfortunate human victim and we wanted to convey that frustration the zombie must be feeling as it’s so slowly getting there. Perhaps Zombie Walker is up next!

What drew you to make an entirely new experience around the concept of the zombie?

It was an interesting challenge to take on the very famous and very old ideas of zombies and try to deconstruct it all into something that felt new and intriguing to our players. Since our controller is somewhat different in its own right, we felt comfortable enough to allow ourselves to make use of the old familiar settings, sounds and art-styles that are so frequently associated with the zombie genre.

We’re still just students of the art of game development, but the popular answer is going to be, more virtual reality games and ways of making that more accessible and intuitive. Augmented reality and games merged into our everyday lives is a fascinating thing to think about.

In the end it's probably not going to be the controllers and interfaces that have the most features and gadgets to them, but instead the ones that are simple and just work.