"Imagine if you took a monitor, curved it into a cylinder, and lowered the resolution by a lot. Now add wireless Wii nunchuk controllers, and move your glowy avatar around with friends!"
Simon Carless
Blogger
February 09, 2017

Cylindrus is played on 600 LEDs wrapped around a cylinder, with players controlling a single dot that can roam around and attack the other players. Using the natural fog of war of being unable to see the other side of the cylinder, it challenges players to move as they play.

Cylindrus was initially built from trash found on Train Jam 2015, designed around a strip of LEDs developer Jerry Belich was wrapping around things. It wasn't long before an empty Lysol bottle and a bolt of inspiration took hold that would lead to Cylindrus.

As a professor of Game Design at the University of Miami and a five-time ALT.CTRL.GDC exhibitor, Belich is no stranger to making unique controllers and interfaces. After receiving an arduino as a gift, it's become a long-standing passion for the developer.

Gamasutra reached out to Belich to talk about his inspirations for the design, about using human body movement alongside the gameplay, and how he turned junk and some LEDs into the first instance of a Train Jam game being in an exhibit outside the Train Jam booth at the ALT.CTRL.GDC exhibit.

Jerry Belich, or Jerrytron online. My twitter is @j3rrytron. I'm the creator. Worked solo this time! 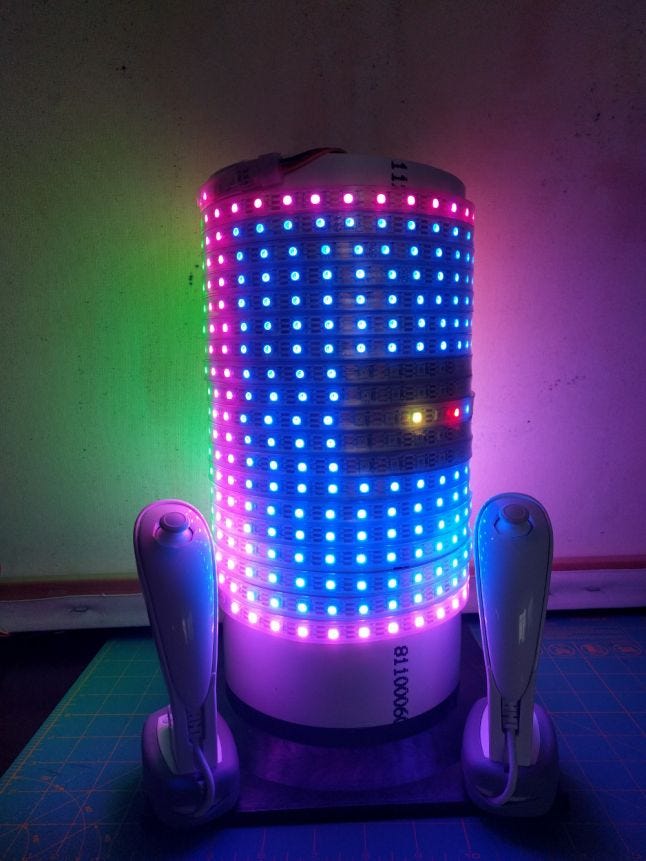 Imagine if you took a monitor, curved it into a cylinder, and lowered the resolution by a lot. Now add wireless Wii nunchuk controllers, and move your glowy avatar around with friends!

Over fifteen years ago I worked on a terrible, yet wonderful series of games called Pac-Guy, later renamed Pea-Guy. Then, I took a long hiatus because our publisher dropped us, until about... four years ago?

I was doing development at an agency called Clockwork when I switched back over. I led the mobile dev team, but also did a lot of installation research and development, which got me into hardware. I was given an arduino as a gift, which led me to creating the Choosatron about a month later (an interactive fiction thermal printer box), and that is when things just sort of took off! Choosatron was a hit, and after a successful Kickstarter I was able to fund traveling to festivals, doing talks, and of course creating more alternative games.

My website has a lot of the work I've done since, and I've had projects in every single Alt.Ctrl.GDC so far, five projects in total. I've worked on some digital game work since, but mostly small things, except for dialogue writing on Owlchemy's Dyscourse, which was a blast to be a part of. Currently, I'm a professor teaching game design at Miami University. 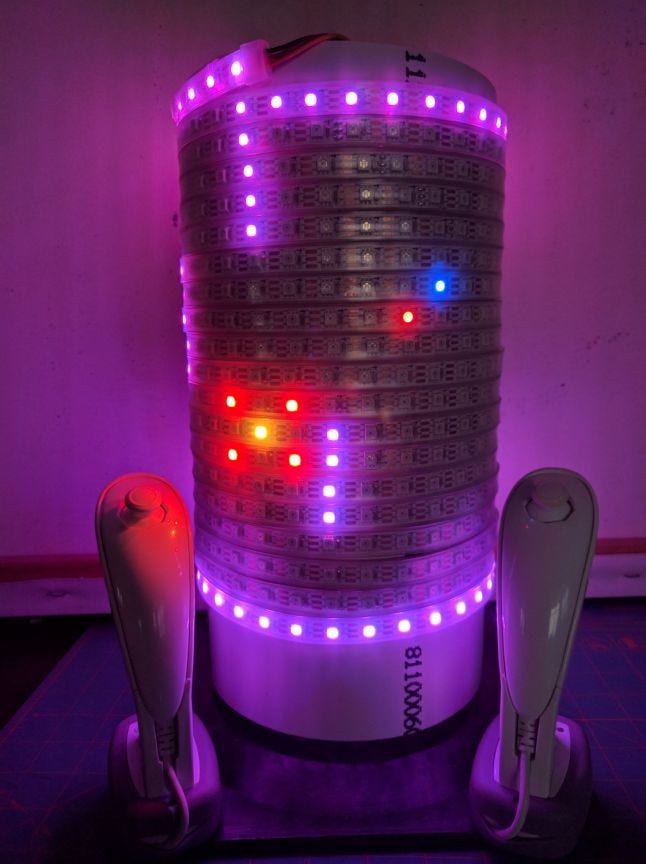 What development tools did you use to build Cylindrus?

I used two different microcontrollers. It started with the Particle Photon, a wireless microcontroller, because that's what I had sitting around at the time. I've since ported to the Teensy 3.2 microcontroller, which is likely what it will be running on at GDC. I have a build environment setup for the firmware on each device, and the code is written in C++.

A large section of PVC tubing, a plastic base, the Particle Photon, and Teensy 3.2 boards respectively, a strip of 600 RGB LEDs, a speaker, four Wii nunchuks, and four wireless adaptors for those controllers. I'm sure there are other parts, but that gets you most of the way there.

That's hard to tell. The initial version was built on Train Jam two years ago, called Tank Top. This is the evolution of that project. I've also used it as an excuse to really polish up my alternative controller code framework. If I only count since I decided to create the Cylindrus version, than I'd say about six full days of work so far. It'll probably double or more before GDC, however. I tend to do just enough before submitting because of how insane my schedule is, and then frantically find time to finish before I need to send it to San Francisco. This is an unfortunate pattern for me. 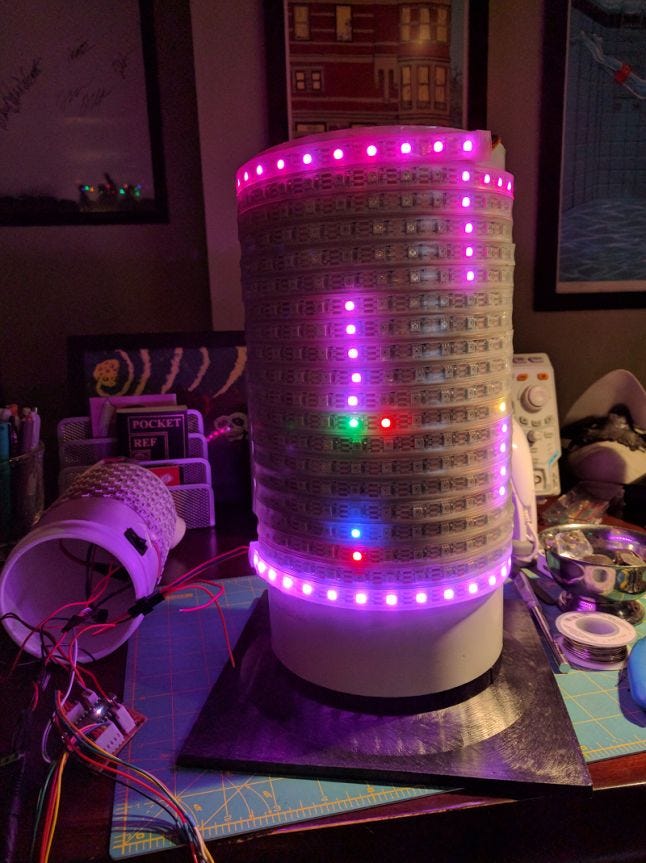 Well, as I mentioned previously, I came up with the concept on Train Jam 2015. I wanted to make a hardware game on the train because it sounded like an excellent sort of bad idea. I was messing around with a strip of spare LEDs that Robin Baumgarten had (Line Wobbler 4eva!) and started wrapping it around things.

After I saw the pattern in made, I thought it would be interesting to try to make a simple coordinate system for the LEDs as they wrapped around, twisting toward the top. Then, I ran around the train looking for random trash to use, and found a Lysol container that was just about perfect. I worked late into the night until I could draw on it, and the rest all evolved from that discovery. The game itself needed to be simple, especially since Tank Top only had about 240 LEDs, so the Atari game Combat leapt to mind.

What appealed to you about creating a play field where the player must move their actual body to see further? To add that layer of physical connection to the game?

I love games against friends with imperfect knowledge. Since the display has no outward dimension, or enough fidelity to add environmental details you could hide behind, the natural fog of war of the cylinder was just perfect. The fact that it is a physical constraint rather than digital got me really excited about the idea. That forces you to consider your own position in space along with the position of your avatar, playing as an advantage if the real you jumps around a bit to scout for enemies, and a disadvantage by leaving your avatar unattended and vulnerable. Being physically involved without it being a sports game or VR, how about that? I wonder if people will push each other...

How did you design gameplay that loaned itself to a cylindrical play field? What thoughts went into designing it?

Most of the concepts have started from old games I played as a kid. Atari-level fidelity and complexity. Again, it is only 600 LEDs, or pixels, so it is going to be a bit abstract no matter what you intend to portray.

I have a tendency to work really hard on devices as platforms before getting to the games, so even now, I don't know exactly what people will be playing. A lot of my thought has gone into the volume of Cylindrus, and thinking about how the space wrapping around implies depth. What is in the center? Can you move through it? I've been playing with radar ping that briefly reflects enemies on the opposite side of Cylindrus, giving a clue to their position inside the fog of war. There is also a submarine concept I'm working on where you can potentially move through the cylinder to the other side, or hide in tunnels or caves. I feel like I've only scratched the surface. 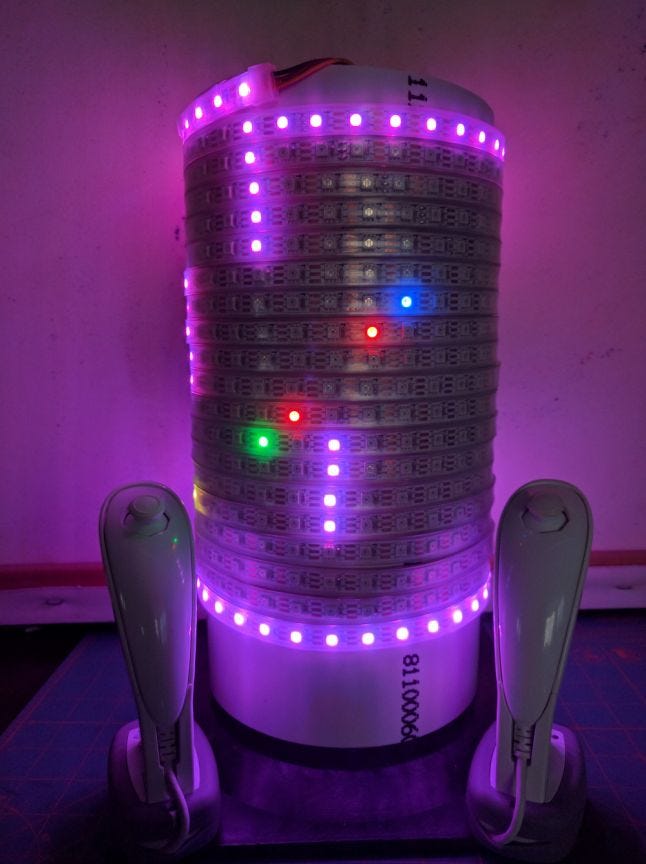 Players will have to maneuver around each other in reality as they seek their enemies in Cylindrus. What do you feel this maneuvering between opponents in reality adds to the player's experience?

I had this thought about what it would be like to fight other people with drones, in the air, but also try to block or check the other people actually controlling the drones. Of course Cylindrus is a smaller, focused space, so the encouragement to disrupt people directly rather than just through gameplay is higher, I hope. I don't want fights to break out, but just friendly blocking and generally being a nuisance. Multiple planes of play without either plane being too complex to keep properly in mind lends itself to players quickly generating interesting strategies, and then counters to those strategies.

I think the industry will find a better balance between homogenized controllers and low-cost components that can augment unique, easier to acquire or build components. Just look at what Valve has already announced for the Vive with those lovely little tracker devices! I love the idea that I might require one of those for a game, but just include instructions on what around the house you could mount it to for the effect I want.

That's VR, granted, but I'm excited about more crossover between alt ctrl and VR, which I've been tinkering with. In general, prototyping is getting crazy easy with low cost, powerful hardware, components, 3D printers, laser cutters, etc. That will keep driving up innovation. Larger companies are paying attention to that, and I think we will see more and more specialized, smart, physical devices. I'm sure plenty of things will still have touch screens, but it isn't an either/or anymore.

People are tactile. They feel more engaged and connected to things they can touch, especially if those things respond in intuitive and even intelligent ways. It's going to be fun, and I hope I get to stay a part of what's to come.