GDC 2019 seeks your great offbeat controller games for Alt.Ctrl.GDC! The submission deadline is November 30th, and to inspire you we're highlighting some prior standouts -- like Puppet Pandemonium!
Alex Wawro
Blogger
October 18, 2018

Now that registration is open for the 2019 Game Developers Conference, organizers want to quickly remind you that the call for submissions to Alt.Ctrl.GDC, the perennially popular on-site showcase that highlights unique control methods for playing games, is still open!

The deadline for submissions to the showcase is Friday, November 30th, and organizers welcome any and all one-of-a-kind game peripherals, contraptions, and novelties which enhance game experiences and challenge our expectations.

As in years past, the showcase itself will take place during the final three days (March 20-22) of GDC 2019. Teams for each submission chosen will be asked to showcase their game to GDC attendees at the Alt.Ctrl.GDC exhibit area; they’ll also receive a pair of All-Access Passes and a pair of Expo Passes, for a total of four free passes to GDC 2019!

To help inspire you to design and submit your own fantastic, offbeat contraptions we're highlighting some standout submissions from Alt.Ctrl.GDCs past, among them the remarkable puppet show video game (and 2018 Alt.Ctrl.GDC Award winner) Puppet Pandemonium! 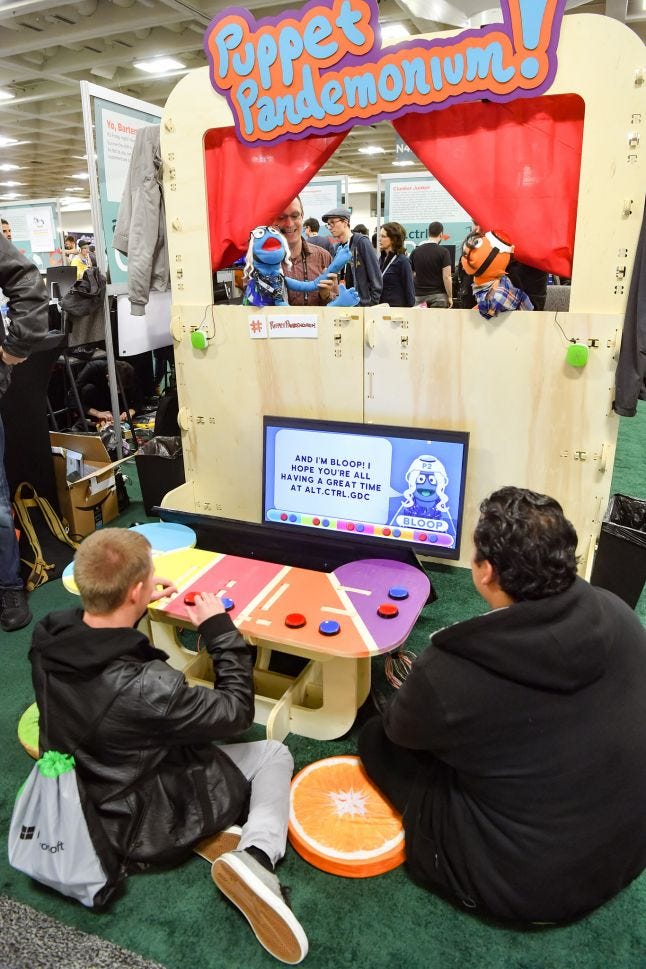 Created by a Seattle-based team of designers and developers, Puppet Pandemonium is an intriguing mix of theater and play that melds classical dramatic tools (namely, puppets) with contemporary game design. It was selected to appear in this year's Alt.Ctrl.GDC Showcase, and honored with the 2018 Alt.Ctrl.GDC Award! It then went on to appear at other shows and win a variety of awards.

Puppet Pandemonium is something of a cooperative puppet show game: two players stand behind a faux stage and play the game using real puppets with buttons on them, while other players sit or kneel around a low table in front of the stage (to watch the show, of course) and mash on their own buttons to help the puppeteer-players out.

It can get a bit rambunctious, and it's just the sort of playful juxtaposition of game design and controller creativity that Alt.Ctrl.GDC is designed to showcase. Watching people enjoy Puppet Pandemonium at GDC and elsewhere inspires us, and we hope it inspires you too!

GDC and Gamasutra are sibling organizations under parent company Informa