A Wild Jellyray Appears!: How a new creature enters the underwater alien ecosystem of Aquamarine

Probably my favorite part of developing my hand-drawn survival adventure Aquamarine is designing a new creature for its underwater alien ecosystem. Here's an in-depth look at the process of creating one of our game's most recent additions.
Game Developer
Staff
January 27, 2020

This post originally appeared on the Kickstarter campaign for Aquamarine.

Probably one of my favorite aspects of developing Aquamarine over the years is that, much of the time, I get to make up whatever I want and put it in the game. How fun is that?! No matter what, it's a blast, but hands down the best part is when I get to design and create a new creature for the world. I thought it might be interesting to share a peek into how that process works, so I've picked one of our most recent creations to walk you through the steps.

So the first thing you're probably wondering is: "Patric, how on EARTH did you ever come up with the ingenious idea of naming this underwater alien The Swimmer??" Well, first off, I know you're being sarcastic. And secondly, its name wasn't always so basic-sounding, I swear. Let me start from the beginning. 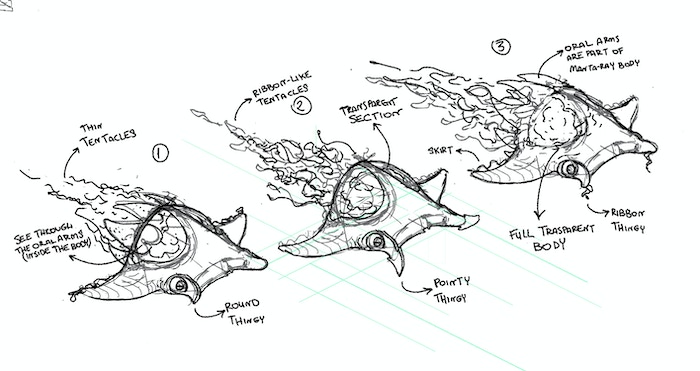 It's rare that a new creature enters the game simply because someone had a cool idea. No, in order to keep the game's design clear and uncluttered, creatures need to serve a specific mechanical purpose. The just-for-fun cool ideas can come after that. For The Swimmer, the void we needed filled was quite simple: An obstacle (I think of all of our creatures as obstacles, not enemies) that challenged the player from a distance. We already had The Eater, which damages the player when they get too close, The Hider, which surprises the player and pushes them backwards, and The Scavenger, which is essentially an indestructible combination of The Eater and The Hider. But none of them had range, and truthfully, none of them were really all that dangerous.

With the mechanical need in place, it was time to go diving (lol) for inspiration. The creature would need big fins that it used to propel itself from a distance, and quickly enough that striking its prey would be lethal. It also needed its own kind of defense mechanism/hunting strategy, which I decided could be a form of octopus-like camouflage. With these ideas in mind, it didn't take long to come up with giant manta rays and giant jellyfish as our main references. I got really excited thinking of how these two amazing animals could be combined into something otherworldly. And once I landed on the concept of a stealthy, translucent hunter that stalked its prey from a distance, it immediately clicked with the mechanical needs and the creature design was set. I called it the Jellyray. 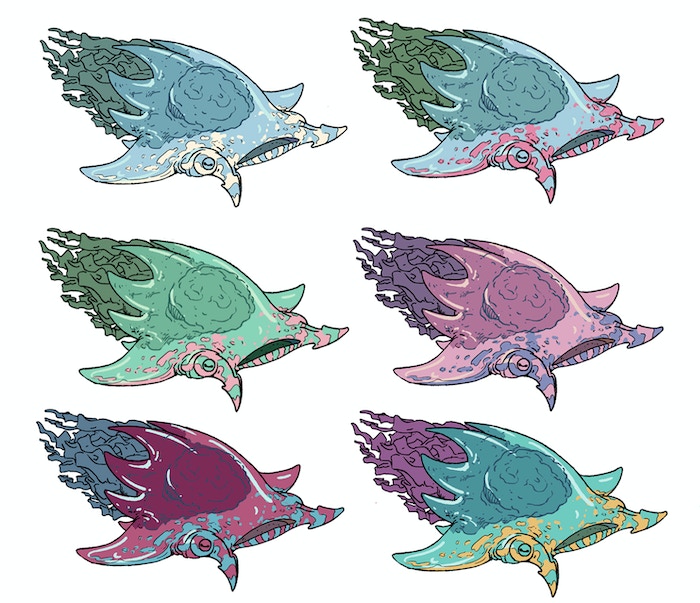 From there, I began collaborating with our lead artist, Leonardo d'Almeida, who brought his own experience with scuba diving and studying marine life to the table. Armed with my description of the creature's concept, a list of mechanical behaviors, and lots of reference images, Leo began sketching out multiple versions of how the Jellyray could look. He even experimented with a number of color schemes, and it was almost impossible to choose a favorite. More likely than not, there will be multiple versions of this creature throughout Aquamarine, and each kind will have its own colors. 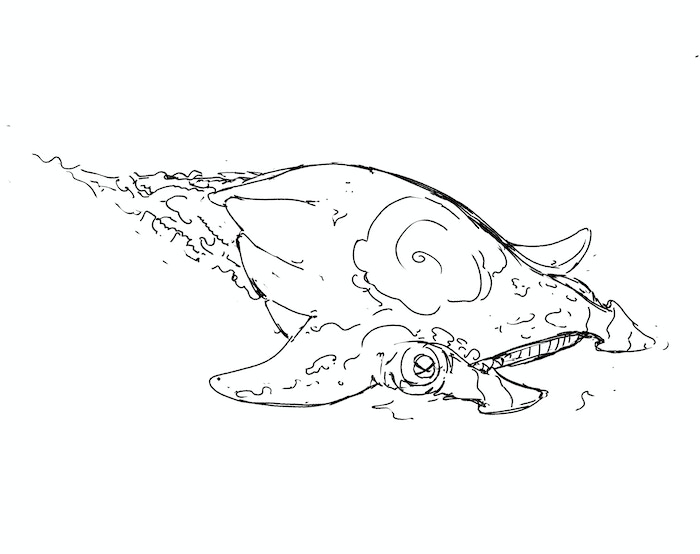 Thinking about how the creature's attack animation would look, especially with Leo's illustration now finalized, began to change my idea of how that movement worked, physiologically speaking. We decided that instead of using fins to propel itself, the creature actually sucked in water to inflate its body and then shot it out the opening in its backside. This idea didn't just make more sense, it was way more fun and looked way cooler. The hard part would come when our animator Drew Brouillette actually had to create that animation sequence.

Once the design and animations were finished, I quickly got to work implementing our new buddy into Aquamarine's alien ecosystem. It showed me its true nature immediately: This was not a friendly creature to most other ocean dwellers, as it hunted them down and had no real predator of its own. But for savvy players, there would be a number of avenues for avoiding its sneaky attempts at having your ship for lunch. In any case, it became abundantly clear that a name like Jellyray was too cute for this specimen, plus it felt too beholden to Earth's marine life. It didn't make sense to call it "The Hunter" either, because that wasn't its most unique trait. Instead I landed on The Swimmer, in reference to the lethal momentum it created when propelling itself underwater. So be careful out there in the depths, you might not even know our new friend is nearby until its too late.

P.S. If this kind of creature design is especially fun and interesting to you, definitely consider backing Aquamarine's Kickstarter at the Guided Biologist tier. It's on the higher end ($300), but I think it's totally worth it. I'd love to work with you on making a new creature like The Swimmer for Aquamarine's weird waterworld.